From the vineyards of Massandra

On 10 February, the Ministry of property and land relations of the Republic of Crimea announced the sale of belonged to the government of the Crimea of the land area of 36.4 hectares of Gurzuf. The Agency emphasizes that these were the first auctions on sale of state land in the Crimea after the area was under Russian jurisdiction. The order about carrying out of auction the head of the Republic of Crimea Sergey Aksenov signed on 8 December 2015, the auction itself took place in late January.

An area of 36.4 hectares was put up for sale for 149,7 million rbl. with step of auction of 3%, i.e. the initial cost of one hectare of land was 4.1 million rubles In the Protocol of the Commission on the conduct of the auction States that the auction was attended by three companies, and the winner was the Moscow company “Elias”, who offered a plot 163,16 million rubles (that is about 4.5 million rubles per ha). The documentation for the auction also indicated that this site may only be used for the organization of viticulture and winemaking. 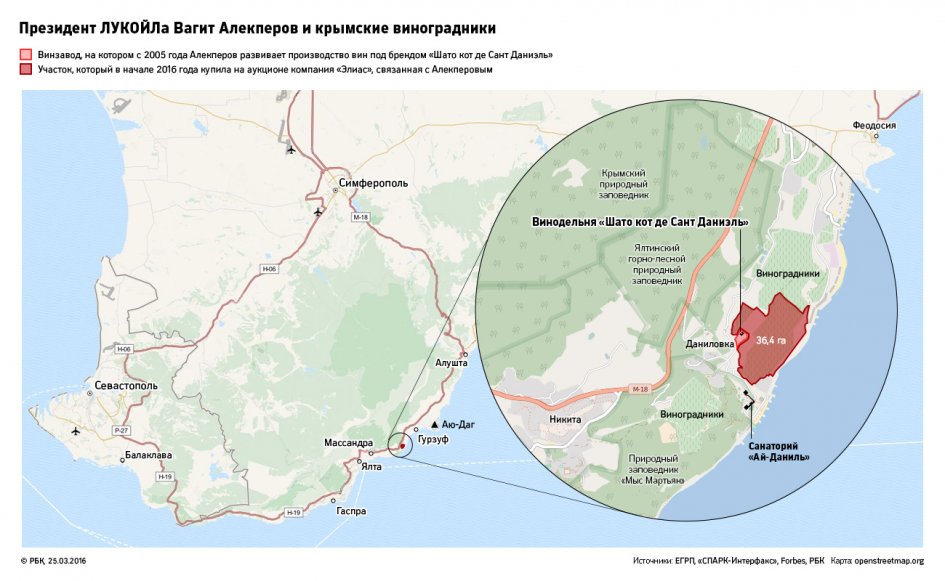 Who is behind the LLC “Elias”, the Crimean authorities did not disclose. But data from Spark (see extract) that the firm may be associated with the owner of LUKOIL Vagit Alekperov. Rivals “Elias” at the auction were two of the Volgograd building companies — “Nizhnevolzhskaya and MCL Plus”. Both firms are registered at the same address, have a common telephone number and are the contractors of LUKOIL (or their representatives on questions not answered).

As “Elias” is related to Alekperov:

According to SPARK, the sole owner of LLC “Elias” — Marina Romanycheva. It also owns 75,01% of LLC “Center of Consulting and outsourcing (CCP) “Our future”. The second owner of this company is the Fund of regional social programs “Our future” Vagit Alekperov. On the website of the CCP “Our future” stated that the center was founded in 2009, the same Fund.

The representative of CCP “Our future” confirmed that Romanycheva is the founder of the company, refusing further comment. By phone LLC “Elias” mentioned in Doubles, the correspondent replied that I could not connect neither with representatives of “Elias” or Romanycheva.

According to SPARK, Marina Romanycheva is also the CEO of the company “Alias”, which belongs to LLC “holding strategic development” (HSR). HSR registered address Bolshaya Ordynka., 1 — in one of office buildings of the company LUKOIL (there are also offices of “LUKOIL-TRANS”, “LUKOIL-Reservnefteprodukt” and “LUKOIL-Staff”).

HSR, according to SPARK, also belong to the company “Chernomorye” and LLC “RVF”, which are legal entities winery Château Cotes de Saint-Daniel in the Crimea.

The expansion of the economy

Sold the site is located in the neighborhood (see map) with a small winery Château Cotes de Saint-Daniel in Gurzuf. That this economy belongs to Alekperov, wrote in Forbes magazine and “the Russian newspaper” without references to sources. But this information was confirmed by several managers and owners of Russian wineries.

According to historical information on the website of the winery Château Cotes de Saint-Daniel, she traces its history from the wineries, founded in 1820, the Governor-General of Novorossiysk Vorontsov Mikhail in the tract AI-Danil. Help also indicates that the revival came earlier in the decline of the economy began in 2005 — an undisclosed investor has started to recreate the winery on surviving image of a historic wine cellar. The first bottling of the wine Château Côtes de Saint-Daniel, according to the company’s website, was made in 2009, and since then, wines under the brand Château Cotes de Saint-Daniel participate in the wine exhibitions and tastings. 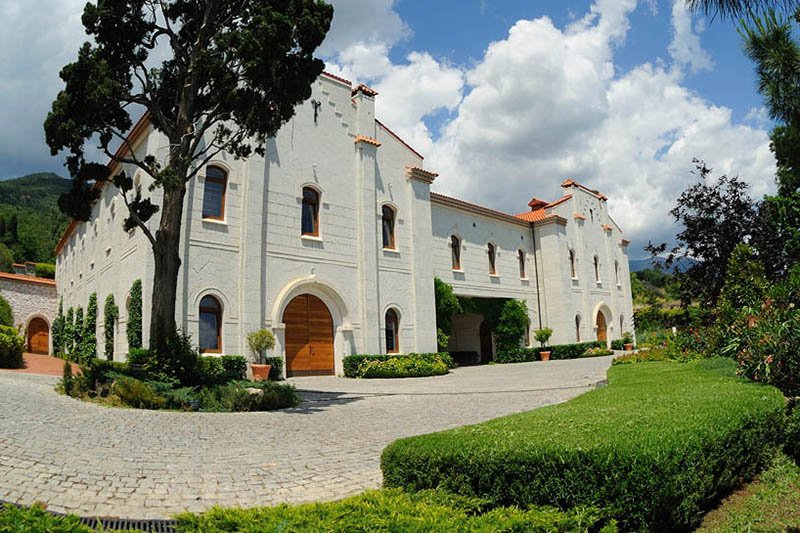 The head of the Union of winegrowers and winemakers of Russia Leonid Popovich has declared that never heard about the beginning of the privatization of vineyards in Crimea. The price of 4.5 million rubles per hectare paid by LLC “Elias”, he said, is very high. “If it’s just the land for the vineyards, you sounded amount is incredibly expensive,” says Popovich. The cost per hectare of vineyards in the Anapa district of the Krasnodar region, one of the best locations for growing grapes, now is from 500 thousand rubles to 1 million rubles, the expert estimated. The price paid for the Crimean land, in his opinion, can be justified, if in addition to the vineyards on the purchased land will be built a hotel and other tourist facilities.

“It’s really expensive, says wine critic, member of the Union of sommelier and experts of Russia Alexander Sidorov. But these vineyards are situated on the “Golden” land is one of the most beautiful places on the South coast of the Crimea”. According to Sidorova, the land around Gurzuf suitable for growing of grapes for superior wines. There are great soils, there is the influence of the sea, lots of sun — no wonder there are the best vineyards of Massandra.

The land bought by “Elias”, before joining of Crimea to Russia also belonged to the National production-agrarian Association “Massandra”, wrote in December, “RIA Novosti” with reference to the press service of the Ministry of property of Republic of Crimea. The “Massandra” from the date of accession was transferred to the office of the President of the Russian Federation. To receive the comment of the current Director General of the Association of Ioannina Pavlenko failed.

Doing business in Crimea carries the risk of sanctions from the European Union and the United States, said the Chairman of the Collegium of advocates “starinsky, Cartago and partners” Eugene Cartago. The design of the asset at nominal or authorized person does not remove the threat of falling into the “black list”, said the lawyer.

Eminent winemakers of the Crimea:

Château Côtes de Saint-Daniel is not the only Crimean winery, ownership of which is attributed to the large Russian businessman. In October 2015 he wrote that located in Bakhchisaray district agriculture Alma Valley, probably connected with the structures of the head VTB Andrey Kostin. As in the case of agriculture in Gurzuf, Alma Valley began to develop in the “Ukrainian period” the history of Crimea — the first seedlings of European varieties were planted in the valley of the Alma river in 2008. In 2013 this site was built ultramodern winery in the style of hi-tech design capacity of up to 3 million bottles of wine per year, in 2015 the first wine farm entered the retail sale. Farm Alma Valley is considerably larger than Château Cotes de Saint-Daniel — total area of vineyards amounts to 160 ha against 19 at the southern coast of Crimea. In 2016 Alma Valley plans to sell about 1 million bottles of wine, said the Deputy Director of agriculture, Moscow wine critic Igor Serdyuk.