Russian coal producers may be advised to suspend the operation of the mines in the event of problems with their security, said the head of Rostekhnadzor Alexey Aleshin, speaking on air of TV channel “Russia 24” on 2 March. The occasion was the accident at the Vorkuta mine “Severnaya” company “Vorkutaugol” (part of “Severstal” Alexey Mordashov) at the end of February, which claimed the lives of 36 people.

The fate of the mines with a high content of methane and the danger of emissions will be discussed on Monday, April 4, at a meeting with Prime Minister Dmitry Medvedev. This tells the employees of several companies, representatives of which will participate in the meeting, and confirmed the Federal official. The representative was not Medvedev on Friday to confirm the meeting.

On March 16 at a meeting with Deputy Prime Minister Arkady Dvorkovich Deputy Minister of energy Anatoly Yanovskiy presented a list of 20 critical mines (presentation of the Ministry of energy is available). It includes four Vorkuta mine “Severstal” including “North” where there were explosions from methane; eight mines of Evraz Roman Abramovich and partners; two — “Mechel-mining” Igor Zyuzin (see infographic).

At the same meeting voiced the idea to close all coal mines with hazardous concentration of methane and dust, and develop open-pit mining. The proposal was made by the owner of “Mechel” Igor Zyuzin, wrote “Vedomosti”.

How did you find out about the mass closure of mines with an increased probability of an accident of speech does not go yet. According to the draft minutes of the meeting of the Prime Minister (also is available), the government plans to gradually eliminate only loss-making mines in Prokopyevsk, Kiselevsk and Anzhero-Sudzhensk.

Mine in Kiselevsk and Anzhero-Sudzhensk was not mentioned in the list of the Ministry of energy as a threat. In Prokopevsk two municipal mines — im. Dzerzhinsky and Krasnogorskaya. The list Yanovsky was only mine “Krasnogorsk”. Dvorkovich’s representative are unable to say whether or not they closed the mine. Dzerzhinsky.

The largest accidents at Russian mines

On 19 March 2007, 110 people died as a result of explosions of methane-air mixture and coal dust on mine “Ulyanovsk”. Accumulation of gas, wrote ITAR-TASS that occurred due to intentional disablement of gas protection equipment as directed by the management. In November 2010, the court convicted the mine Manager Vladimir Poluyanov, sentenced to three and a half years in a penal colony, and the engineer of a site of ventilation and safety Nina Bychkov, who received three years of probation.

91 people died as a result of two methane explosions at the Raspadskaya mine on may 8-9, 2010. About 100 people were injured and 11 dead bodies were never found. The main causes of the accident was the lack of proper control over observance of safety rules. In January 2015 the RF IC announced the end of preliminary investigation the main defendants in the case: former Director of the Raspadskaya Coalmine Igor Volkov, chief engineer of the mine Andrey Druzhinin, his first Deputy Vladislav Roll, as well as technical Director of the Raspadskaya coal company Anatoly Ryzhov.

As a result of explosion of methane and coal dust in the mine “zyryanovskiy” 2 December 1997 killed 67 people. The cause of the disaster was the work of a harvester operator, which crushed the rocker combine the device that triggered the explosion suddenly appeared in the mine gas. None of the miners and mine managers suffered no punishment.

47 miners died in the explosion of methane on mine “Tajzhina” April 10, 2004. In July of the same year it became known that office of public Prosecutor of the Kemerovo region has stopped investigation of the criminal case on the fact of death of miners. According to investigators, the accident occurred due to the combination of natural factors. After this “Tigina” renamed in the second area of the mine “Osinnikovskaya”line.

As a result of explosion of a methane-air mix on mine “anniversary” 24 may 2007, 39 people died. The Commission of Rostechnadzor have established 35 persons responsible for the accident. Among them General Director of “JUzhkuzbassugol” George Lavrik, which, according to experts, did not provide control of observance of safe working conditions at the mine. The economic damage from the accident amounted to 167.7 million rubles.

The accident at the Severnaya mine was on the 25th of February 2016. A sudden release of methane at the depth of 780 m led to the explosions. Four people were killed, 81 were able to evacuate. 26 people remaining in the mine, it was decided to count the dead. On the night of February 28 in the mine there was another explosion, killing five rescuers and one mine worker. In early March, the UK began the searches at the mine, and later technical Council for the elimination of consequences of the accident decided to flood it with water.

The Ministry of Finance proposed to include in the Federal budget for 2017-2019 years, 1.7 billion rubles for the elimination of mines and the resettlement of people. To call the representative of company “SDS-coal” (owns a coal mine in Kiselevsk) failed, and in MC “Nina” (mine in Anzhero-Sudzhensk) the request is not answered. An employee of the company said that the mine is in a state of bankruptcy.

Basically the instructions in the draft Protocol regarding the improvement measures of work safety of miners and to improve the systems of warning and prevention of accidents. For example, the Ministry of energy, Rostekhnadzor, EMERCOM, Ministry of natural resources, Rosnedra, and interested companies will be requested to create a Commission to analyze the operation of the mines of the first category of danger. 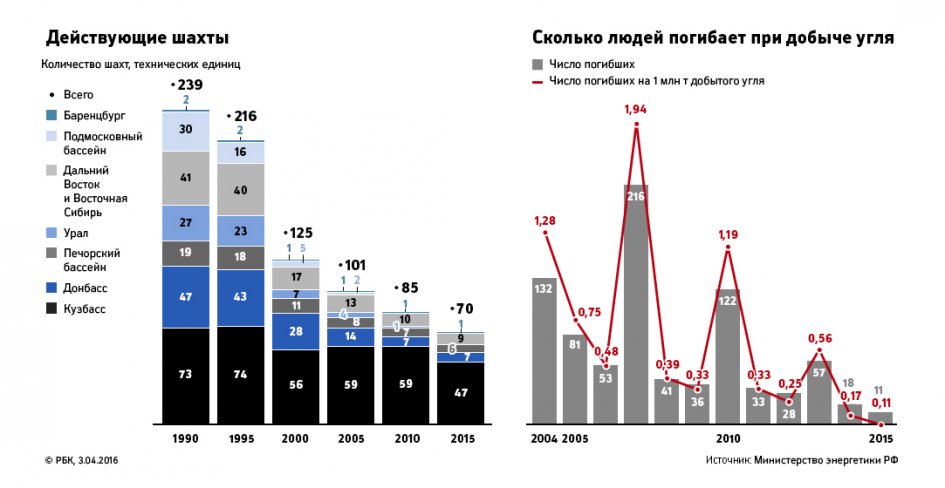 Now the mass closure of dangerous mines is almost impossible, said in March the General Director of “Raspadskaya” (one of the mines of the company appeared in the list of the Ministry of energy) Sergey Stepanov during a conference call with analysts on March 29. In the most gassy mines coal produces premium raw materials from the quarries of inferior quality, he explained. According to Stepanova, the alternative is steel imported coal, but it will cost the Russian metallurgists more expensive by $0,5–1 billion per year.

Besides steelmaking facilities in Russia, as a rule, were built under the specific coal deposits and to reconstruct blast furnace raw material to another is virtually impossible, said sources in two steel companies.

The government can still return to the issue of the closure of dangerous mines, assured sources in the industry. In the draft minutes of the meeting Medvedev should order the relevant ministries to study the issue of substitution of Vorkuta’s coal other raw materials. However, a source close to “Severstal”, argues that “the closure of the production in Vorkuta in the coming years, it is not”.