Under the terms of the contract, the car manufacturer “Mazda Sollers” will build the production capacity is 50 thousand engines per year at its plant in Vladivostok. 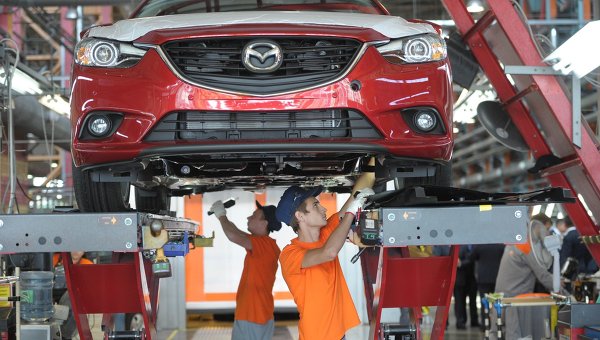 MOSCOW, 4 APR. The interdepartmental Commission under the Ministry of industry and trade of Russia took a decision to conclude the contract with the company “Mazda Sollers” about creation of manufacture in Vladivostok, according to the industry development Fund.

As noted in the Fund, in exchange for the permanence of the business environment and preferences from the state the company is obliged to create production engines and to assemble new versions of cars in Vladivostok.

Under the terms of the contract, “Mazda Sollers” undertakes to build at its plant in Vladivostok the new production capacity is 50 thousand engines per year, investing 2 billion rubles, and also to master the production of updated versions of the Mazda-6, Mazda CX-5 and automotive engines Mazda Sky Activ-G. this will create more than 600 jobs, said in a release.

It is expected that the Ministry of industry and trade, the company and the regional authorities will sign the investment contract before the end of April 2016, it will be valid until 2023.

In September past year the head of the company “Sollers” Vadim Shvetsov and the first Deputy head of the Ministry of industry and trade Gleb Nikitin signed with the President of Mazda Motor Corporation Masamichi Kogan Memorandum on implementing the investment project on creation and development of production vehicles and engines in the territory of Primorsky Krai.

The industry development Fund is created for the modernization of Russian industry, the establishment of new industries and ensure import substitution. The Fund offers preferential conditions of co-financing of projects aimed at the development of a new high-tech products, modernization and creation of competitive production on the basis of the best available technologies.