Objectives of the campaign

In mid-March 2016 the Levada center asked Russians about their attitude towards the purposes and results of the Russian campaign in Syria. 1,600 people in 137 towns answered questions about the purpose and effectiveness of the Syrian operation.

President Vladimir Putin in November 2015 defined the aim of the operation is as follows: “Cleanse Syria from the militants, the terrorists and to protect Russia from possible terrorist attacks”. He later pointed to another problem: the Russian military needs “to stabilize the legitimate government and create conditions for a political compromise.”

Judging poll by the Levada center, the majority of citizens believed in the first of the stated objectives. More than half of respondents (58%) said that the government is using the army sought to neutralize and eliminate the threat of transfer to Russia of the military action of the Islamic radicals and terrorists.

The second version of Putin — the second most popular and the respondents. More than a quarter of respondents (27%) believe that a group of Russian HQs in Syria defended the government of Bashar al-Assad to prevent the chain of color revolutions, “precipitated the U.S. around the world.” 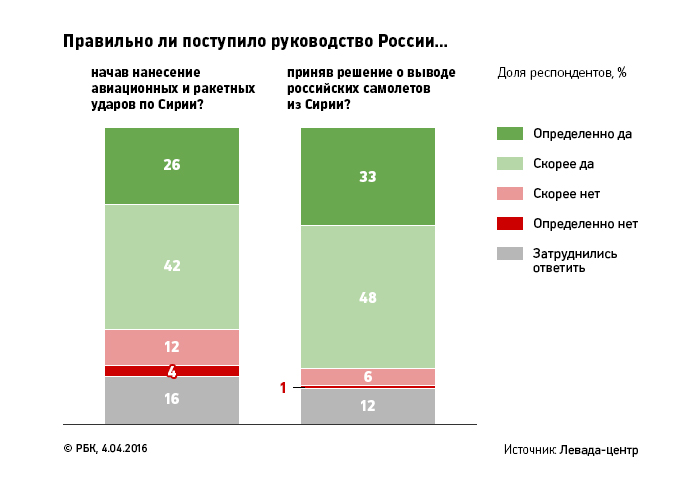 However, a quarter of Russians (24%) in the official version did not believe, and pointed out other “real” reason for the operation. According to some, the government tried to weaken Russia’s isolation by the split in the coalition (9%), others saw the task of Moscow is to support the regime of Bashar al-Assad in fighting the opposition (9%). The latter noted that the government “itself is afraid of such mass anti-government protests” and therefore supports the Syrian regime. The remainder (8%) of respondents believes that the military campaign is designed to distract the population from domestic problems in the country.

Are unable to clearly define the problem 19% of respondents. Most of them (12%) simply do not understand why Russia participated in the Syrian war. Count the remaining chose “don’t know”.

According to the Deputy Director of the Levada Center Alexei Grazhdankin, the General level of misunderstanding of the decisions of the authorities in General higher than the figures relate to estimates of the Syrian campaign. “The first explanation given by the government, were immediately accepted by the society”, — said the expert. In other words, says Grazhdankin, the lighting of the Syrian campaign in the media did not affect the opinion of the majority. 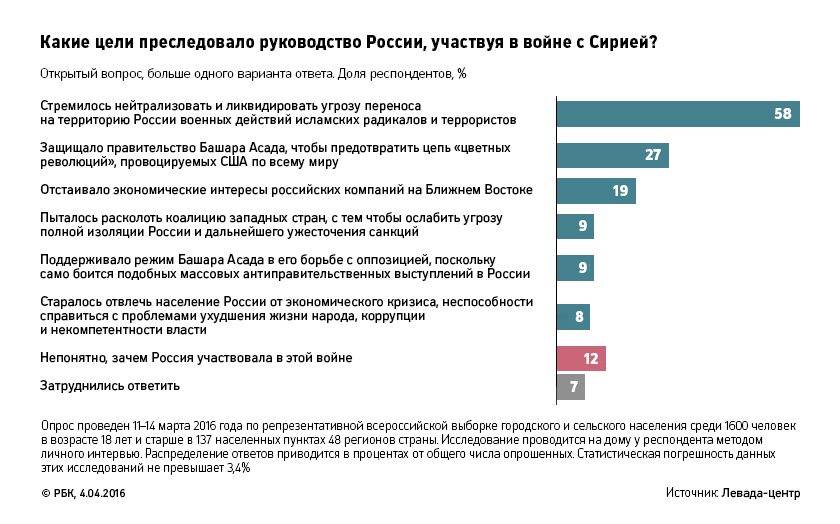 Disagreeing with the participation of Russian troops in the protracted conflict in the region were in the minority. To the question “should have done the Russian leadership, starting this fall the application of air and missile strikes in Syria?” only 12% of participants answered “rather no” and 4% had a clearly expressed negative attitude towards the beginning of the operation.

Those who spoke out against its end, was even less. Only 6% answered “rather no” to the question “should have done the Russian leadership, taking the decision to withdraw the aircraft from Syria?” And 1% of respondents (less statistical error) definitely negatively expressed about the end of the campaign.

The efficiency of the operation

With the latest assessment does not agree military expert Alexander Golts. “The withdrawal of Russia from international isolation after the crisis managed”, — the expert believes. According to him, this task has not been officially declared, but in this plan the Russian government as close to the goal.

“Russia has not yet solved the problem of combating international terrorism, since such a task cannot be solved by military action” — said Goltz. According to him, the victory over terrorism to speak prematurely. As well early to speak about a complete stabilization of the regime of Bashar al-Assad. “A partially stabilized mode, but at the moment Russia’s intervention has not led to the full control of the country”, — emphasizes the analyst.