By the end of 2015, the operator “T2 RTK holding” (Tele2) was of 1.27 million subscribers in the Moscow region, said in a statement. The capital market operator was released on 22 October 2015. Prior to this recent data on the number of subscribers in the region in February 2016 opened the Director for strategic planning Tele2 Svetlana Skvortsova: this indicator has exceeded 1 million people, and passed on to TASS.

In General, the number of Tele2 subscribers increased by 2.3 million and reached 37.3 million people. Thus, the operator’s subscriber base increased during the year by 6.6%. The percentage increase in the number of subscribers year-on-year the company was higher than the competition — MTS (3.6%), and VimpelCom (4,5%), but lower than that of “MegaFon” (7.2 per cent).

The subscriber base in the Moscow region by the end of 2015, in addition to Tele2, in conversation with has revealed only “the Megaphone”. The number of operator clients in the region exceeded 13.5 million, for the year increased by about 10%, said the representative of the Moscow branch of the company Pavel Larin. “VympelCom” considers itself a leader in terms of subscribers in the Moscow region, but does not disclose specific figures, said the representative of the operator Anna Imasheva. MTS also announced a number of clients in Moscow.

By the end of 2015, 1,27 million active mobile subscribers is about 3% of the total number of customers of mobile operators in the Metropolitan area, evaluates the head of cellular and digital devices J’son & Partners Consulting Eugene Almenov.

“No matter how many the operator has connected subscribers — the number of subscribers continued to use his services when connected”, — said the representative of MTS Dmitry Solodovnikov. Services from MTS, he said, in Moscow refuses “the minimum number of clients”. While none of the operators does not mention specific indicators of churn in Moscow. As a whole on the country outflow of Tele2 in the fourth quarter was 9.1%, MTS and “VympelCom” it is higher — 10.8 and 12.6%, respectively (“the Megaphone” does not name a figure).

In the third quarter of 2015 in Moscow there was a total of 41.3 million mobile subscribers, according to data of the Agency AC&M Consulting (numbers for the fourth quarter yet). According to AC&M, a leader at the time was “VympelCom” with 14.4 million subscribers, MTS had 13.8 million subscribers, MegaFon — 13.1 million Thus, from the data analysts indicated that VimpelCom accounted for 35% of the Moscow market, MTS — 33%, “the Megaphone” — 32%.

By the end of 2016, Tele2 can take from 5 to 10% of the cellular market in Moscow, according to experts of the analytical Agency iKS-Consulting. The current number of connections is expected, says the analyst iKS-Consulting Maxim Savvatin. The result of 1.27 million subscribers was “more than good”, said General Director of analytical Agency TelecomDaily Denis Kuskov.

Of 1.27 million subscribers Tele2 received two months of work in Moscow and the Moscow region, which accounted for 3% of the capital of the mobile market

41.3 million mobile subscribers were in the Moscow region in the third quarter of 2015, including 14.4 million people were clients of VympelCom, 13.8 million — MTS, a 13.1 million — MegaFon

1.1 trillion rubles amounted to total revenues of operators “the big four” in 2015. Only two of them — MTS and Tele2 — were able to increase the income for the year

The exit in the Moscow region did not help Tele2 to increase market share, it amounted to 14% in the number of subscribers in Russia, while a year earlier was higher at 15%, followed from the presentation of “Rostelecom” (owns 45% Tele2) to investors.

In the fourth quarter of 2015, when Tele2 has started in Moscow, the operator’s revenue declined year-on-year by 3.2%, to 24.1 billion rubles. the Company explains it is “General market trends” for the decline in revenues from voice services. Indicators proceeds by type of service, the operator does not disclose, but indicates that the growth of revenues from mobile Internet is not yet able to offset declining voice revenue. Other mobile operators revenue trend over the same period were better. MTS is the only “big four” managed to increase revenues by 4.6% to 102,5 billion rubles, MegaFon’s Revenue decreased by 0.5%, to 80.6 billion rubles, VimpelCom — 2.9% to 71.7 billion rubles.

The demand for voice services decreased: during the year the average number used by a subscriber of Tele2 minutes (MOU) fell by 13.6% to 362 minutes. This has affected the average revenue per user (ARPU): in 2015, it decreased by 12% to 217 rubles. For comparison, MTS’s ARPU for the same period decreased 4%, to 326 rubles, but MOU, by contrast, grew by 2.4% and amounted to 381 minute. “VimpelCom” and “Megaphone” do not publish the relevant annual figures.

About Tele2 revenue for the whole of 2015 has already reported its shareholder Bank VTB in its reporting: it grew by 8%, to 94.6 billion rubles however, according to “Rostelecom”, in 2015 the loss of the mobile operator amounted to 7.8 billion rubles. It is associated with the active run of the networks, in particular in Moscow, specified in the message “Rostelecom”. The representative of Tele2 Konstantin Prokshin had clarified that “scheduled loss”.

The volume of Tele2 investments in IT infrastructure and technological network development (CAPEX) increased compared with 2014 214%, to 39 billion rubles., their ratio to revenues was 41.2%. The competition for the “big four” in 2015, this rate was approximately two times lower: 21.2% of MTS, to 18.7% in “VimpelCom” and 22.8% of “MegaFon”. The high cost of infrastructure explains the construction of the Tele2 network in Moscow and other regions. Another consequence of the high infrastructure costs — the reduction in EBITDA during the year by 6.4%, to 23.4 billion rubles, according to the materials of Tele2. Fell and the EBITDA margin of the operator — from 28.6 to 24.7%. 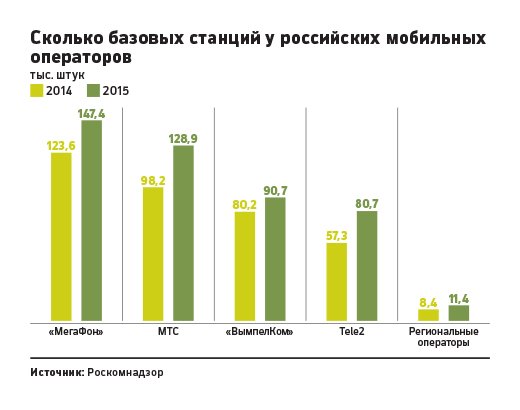 In 2015, Tele2 has built throughout Russia 23.5 thousand base stations required for signal transmission, and reduced the gap on them from the nearest competitor “VympelCom” — twice, follows from the data of Roskomnadzor. At the end of the year, Tele2 was 80,7 thousand base stations across the country (18% of their total number in Russia), VimpelCom is 90.7 million (about 20%), MTS — 128.9 thousand (28%), MegaFon — 147,4 thousand (32%). The pace of construction of base stations Tele2 has turned out to be the highest: the company increased their number by 41%, from other operators, this indicator did not exceed 30%.

Tele2 did not disclose the cost of launch in Moscow. Earlier, the representative of the operator said only that the bulk of the investment was spent on infrastructure construction, the opening of mono-brand showrooms and advertising campaigns during all of these objectives Tele2, in particular, has spent about 25% of the credit line for 16 billion rubles, which the operator has provided VTB. A source close to the owners of Tele2, earlier it was told that on 22 October the company spent to launch in the capital “several billion rubles”.