In a press release the state company notes that, as the competition received less than two bids, he declared invalid, but the competition Commission decided to refer the proposal “Autobahn” and Sacyr Concession for consideration “Avtodor”. The company shall consider the application within 30 days. If the application meets the requirements of the tender documents, the agreement will conclude on the terms specified in the bid.

“Autobahn” is specialized in construction, repair and reconstruction of roads. On the company’s website indicates that it was built about 3.3 thousand km of roads. Among its facilities is the Federal highway M-4 “don” M-3 “Ukraine” M-7 “Volga”, approaches to bridge transitions through the rivers Ob and Irtysh and other objects in KHMAO — Yugra. The group’s revenue for 2014 is 24.9 billion rubles, net profit — 1,3 billion rubles.

Sole owner and CEO of “Autobahn” Alexey Andreev, the Deputy of the Duma of Khanty-Mansi Autonomous district, a member of the party “United Russia”. In 2011 Forbes included only once Andreev in the list of the richest Russians, with a fortune of $500 million In 2014, a businessman was ranked among the “Kings of the state order-2014” — “Autobahn” in 2013 won 15 contracts totaling about 28 billion rubles , the representative of the Andreev explains that he is a Deputy on an ad hoc basis, so you can combine business with social activities.

The length of the 3rd section of the Central ring — 105,3 km. It will be held in parallel to the Small concrete ring A-107 in the North-East of Moscow region and will connect the high-speed road Moscow — St. Petersburg highway and M-7 “Volga”. The route will pass through the territory of Solnechnogorsk, Dmitrovsk, Pushkin, Shchelkovo, Noginsk districts and the urban district Chernogolovka. The design speed is 140 km/h. the Highway will be four-lane. The plot will build 20 bridges and 35 underpasses and four interchanges at different levels. The projected traffic volume in 2030 43.5 thousand vehicles per day. The road will be paid, free alternative will be the highway A-107.

For the construction of the 3rd and 4th nerozhdennyh sections of the route claimed the four consortium — “North Eastern railway” (RDIF management company “Leader”), “JUICE rush 24” (VTB group and the French Vinci), “invest Finance” (the Gazprombank and OAO Stroytransgaz) and ASC (“DSK Autobahn” Alexey Andreev and Spanish Sacyr Concession) that have passed the prequalification.

In January wrote that investors lose interest in the CRR because it does not believe that will pay for the construction costs. Two people in the consortia argued that the actual cost of construction of the 3rd phase may be higher than projected at 10 billion rubles in addition, potential concessionaires were not satisfied that the “Avtodor” not fully undertakes the provision of land prior to construction. Interlocutors in all four consortia said then that a final decision about the participation in the contest.

Deputy Director General for financial development “Autobahn” and CEO of ASC Denis Anisimov said that the company does not expect that its application would be the one. He added that the consortium is ready to build the object “in a sentence for money” and expects that “Avtodor” will approve an application and enter into a concession agreement with the ASC.

“We have a large amount of the funding organizations: there are letters of support from Sberbank, Russian agricultural Bank, the Eurasian development Bank. With RDIF we are negotiating. Hope to be able to financial close,” says Anisimov. The Russian direct investment Fund (RDIF) acts as a financial partner and support consortium together with leading sovereign funds in the Middle East, the press service of “Ukravtodor”.

According to Anisimov, the share of private financing in the project is 44%, i.e. ASC need to attract 33,1 billion rubles, the State will invest in the construction of 42,2 billion rubles.

The Central ring road is planned to be build by 2018 for the FIFA world Cup. The cost of construction, according to preliminary estimates, will amount to about 300 billion rubles, including 150 billion rubles allocated from the national welfare Fund (NWF). The first lot — the first and fifth sections of the Central ring — played in 2014. Their price is 48.9 bn and 42.2 billion rubles respectively.

“Avtodor” couldn’t play 3rd and 4th parts of the road since December 2014. The problems began after the collapse of the ruble and a sharp increase in the key rate. In 2015, the company consulted with potential participants, but the timing of competitions is constantly shifting. In November 2015 issued a decree of the government of the changed funding scheme of the project. The government has committed itself to partially offset the costs to the concessionaire with inflation above 8%. If inflation is higher than 15%, may be revised, the basic parameters of the contract. 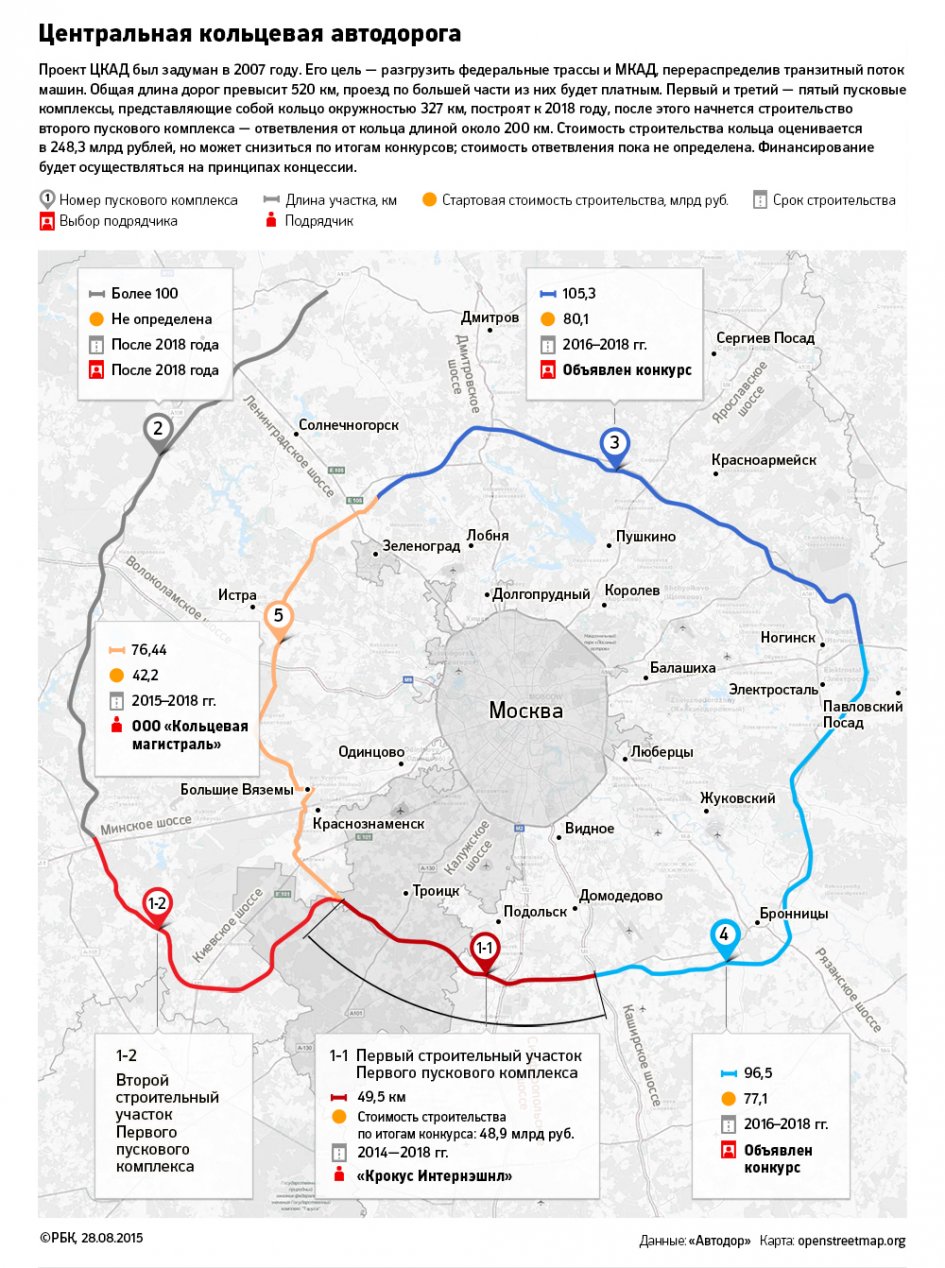