The ruble has risen by about 30% from its minimum value: 21 January, the dollar was worth more than 85 rubles., on Wednesday, 13 April, 17:00 GMT — 65,7 RUB the last time the dollar against the ruble was at this level in November last year, says chief economist for Russia and CIS “Renaissance Capital” Oleg Kuzmin in the review. The price of a barrel of Brent since the end of January rose from $27,9 to $44,1.

The movement of oil prices almost fully explains the dynamics of the ruble, and the impact of other factors is close to zero, says the analyst of MC “Alfa Capital” Andrew Schenk. According to Kuzmin, another important factor influencing the ruble is the slowdown of capital outflow from the country. “Oil prices although still at relatively low levels, but decreasing the outflow of dollars from the country supports the strengthening of the ruble,” — says the economist.

The end of the week, the ruble might strengthen the dollar may be worth less than 65 rubles., says the chief expert of the Center for economic forecasting Gazprombank Yegor Susin. With him agrees the analyst of PSB Alexey Egorov — he predicts the dollar for 65 rubles.

In the short term to prevent the strengthening of the ruble may have the forthcoming meeting in Doha, said analysts and market participants polled . On April 17 representatives of the largest oil exporters meet in Qatar to discuss the freezing of oil production. “It is unlikely that the meeting will be taken some unexpected, major breakthrough. Therefore, market participants may be disappointed by its results, and the price of oil could fall to around $40 per barrel,” says Susin. In such a scenario, the dollar could rise to about 68 rubles, he said.

Analyst ING Bank’s Dmitry Polevoy, too, does not expect that the participants will take “a radical solution”. “Iran is likely not going to cut production, it will put pressure on oil prices,” he predicts. However, the analyst does not expect a significant fall of the ruble: “Our currency maintains a positive trade balance, and in addition, at the end of the month will begin tax payments. Most likely, the pair dollar-ruble will be traded at the level of one of the last two weeks,” says the analyst. In early April the dollar was worth on the Moscow exchange RUB 66-68 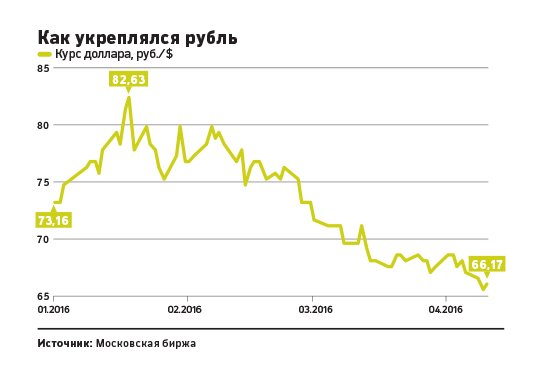 Even if the participants fail to agree on essential reduction of volumes of oil production, this will not change the positive mood of investors, I’m sure Egorov. “Macroeconomic data are improving, so everyone is expecting the growth in oil demand. Quotes will continue to test higher levels in anticipation of further negotiations of the countries-exporters” — said the analyst. In the medium term, the dollar could drop to 60 rubles., says Egorov.

How long the ruble will be strengthened, depends on the level of oil prices and the position of the Ministry of Finance and the Central Bank, says the head of trading IR “Aton” Yaroslav Podsevatkin. “While oil prices are rising aggressively, but a lot depends on at what level the Central Bank or the Finance Ministry starts buying foreign currency to replenish the reserves. Once they enter the market with interventions, we will see the border of strengthening of rouble” — he said.

According to Podsevatkina, if the price of oil approaching $50 per barrel, the dollar rate will be about 60 rubles At this level the Central Bank and the Finance Ministry can begin aggressive purchases of foreign currency. “As soon as an opportunity to replenish its reserves, the Central Bank or the Ministry of Finance take advantage of it. Therefore, the potential strengthening of the rouble is limited,” believes Podsevatkin. Andrei Shenk believes that the Central Bank would enter the market to buy the currency, if oil prices continue to strengthen.

Other things being equal, the ruble may weaken slightly by the middle of the second quarter of 2016, companies will have substantial payments on external debt, indicates Kuzmin. According to the Central Bank in the second quarter will have to repay $22.6 billion However, if oil prices will continue to gradually rise, the ruble will strengthen, adds the economist.