Russian courts have to get rid of accusatory bias, to increase the independence of the judiciary, to change the policy of recruitment of judges and to reduce the overall load on the system, according to the report “Diagnosis of the judicial system in criminal proceedings and proposals for its reform” Institute of problems of law enforcement (IPP), existing at the European University at St. Petersburg.

Document () has been prepared on the basis of official statistical data for the years 2007-2014, own research STIs and interviews with court personnel.

In the period from 2009 to 2013, the judges condemned 75-75 annually,5% of the defendants. “The average judge, working on criminal cases, makes over seven years, about 500 convictions and only one acquittal,” reads the report. Against 22-23% defendants case has been discontinued because, for example, reconciliation between the parties or active repentance.

“Justice in the Russian courts function in a way that is likely to be justified so small that it is possible to say that the guilt of a person is determined with almost 100% probability that at earlier stages of criminal prosecution”, — the experts of the IPP. More than half of all criminal cases (57,2%) is treated in a special manner, that is without research of proofs: it is possible, if the defendant pleads guilty.

From 2009 to 2014, the courts instead of imprisonment have increased their use of alternative forms of punishment — their share increased from 29.4% to 45%. At the same time decreased the proportion of convicts sentenced to imprisonment, from 39,1 to 28.6% in the case of probation, from 31.4 to 26.4% in the case of real. The administration of justice in criminal matters became a little more humane, experts conclude the IPP.

Supreme court Chairman Vyacheslav Lebedev has connected this with the fact that after the entry into force of the new Criminal procedure code in 2002, the issues of arrests transferred to the jurisdiction of the courts. After that, the number of inmates had declined annually.

The likelihood of change or cancellation of the acquittal by a higher court — 30%, charge to 3%, the report said.

Jury trials a year consider 0.1% of all cases. After the entry into force of the new Criminal procedure code the jury could consider the crimes under all counts, but after 2010 the number of articles was severely limited. As the report emphasizes, the jury are much more likely to acquit the accused than regular courts: the proportion of acquittals is 13%.

In total, law enforcement recorded 12 million messages about crimes that after checking turn into 2 million criminal cases. 900 thousand of them are sent to court. “A system of organizational incentives of investigators and prosecutors require to ensure the absence of acquittals. Responsibility for the results of the previous stage does not welcome recognition of mistakes,” the report notes. Some cases (33,3 thousand in 2014) the public Prosecutor returns the result in connection with identified violations.

“The best chance to come to court to have things as simple as possible, containing the confession of the suspect and rather obvious evidence,” the study said. Acquittal means for law enforcement agencies, the deterioration of accountability and disciplinary action, so such an outcome the parties seek to avoid.

Judges at least 97% of the cases satisfy all the requests of the investigation, which relate to investigative activities, including the searches or wiretapping. For example, in 2014 the courts only 432 times refused law enforcement bodies to wiretap the defendants in the case. All such motions were filed more than 513 thousand

Reduces the chances of acquittal of the Institute of lawyers for the purpose, whose work is paid by the government. However, and lawyers under contract are not always able to achieve the desired result for their clients. “The results of the sociological survey, we know that and the investigators, and judges consider the evidence given by the defence, the least convincing of all”, experts stress the IPP. 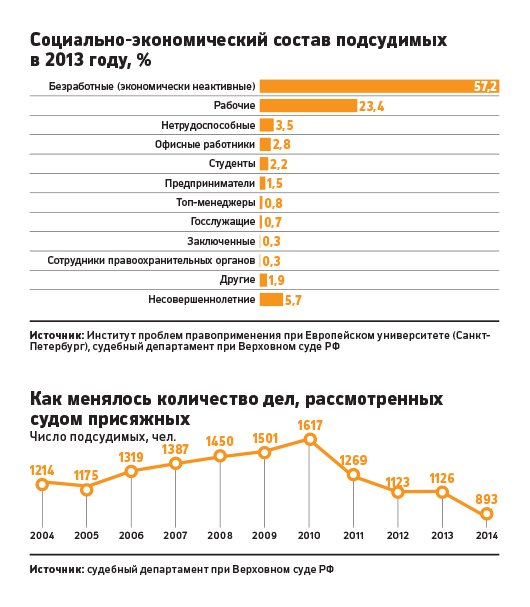 The appointment of judges

The current practice of appointing judges does not ensure their independence. Influence on the appointment of chairmen of courts, law enforcement agencies, which issue the certificates needed to apply for the position, and even the presidential administration. “The Commission’s role when President is not designated in any law, but in fact it is the last filter in the appointment of judges”, — stated in the study of STIs.

Since 2006, the declining number of lawyers from various fields, including public prosecutors who become judges, but a growing number of judges, composed of employees of devices of courts. “This leads into the profession of young women mainly with part-time legal education, having very little experience outside the court,” reads the report.

Judges in Russia and is constantly overload, considering an average of 4.5 cases per day. The consequences of this become the desire to simplify proceedings (in civil cases there was a refusal of making motivation part of the decision) and the increase in the proportion of cases in a particular order, which spends considerably less time.

“The judge, acting in a situation of constant time pressure, forced to seek in each case the most typical situation, who have neither the time nor the inclination to delve into the details, which could be set, allowing the parties to say what they think is important”, — emphasized in the study.

The last difficulty with regard to appointment of judges, were caused by the reform in 2013-2014 by the Association of the Supreme court and the Supreme arbitration court. At least half of the potential candidates for the new authority have been excluded due to the examination Board and qualification Board.

The suggestions of the experts

Experts offer to change the mechanisms of the qualification Collegium so that each judge can be held accountable, to expand the jurisdiction of the court of assize, to make lawyers more independent, to prevent the abolition of acquittal, made on the basis of the jury verdict, to reduce the dependence of judges on court presidents and the other branches of government, as well as change the personnel policy of recruitment of the judiciary.

This is the primary offer, the purpose of which is to receive the response from the judicial community, explains in a conversation with a leading researcher of the IPP Kirill Titaev. On the other hand, some of these measures can already be implemented in isolation from the entire reform, says Titaev: for example, the regulation of the practice of appeals to the court from the Executive authorities. Such requests create a very large load on the courts, but served in microscopic cases.

In particular, the tax shall submit the documents to the court, when it comes to the amount of penalties in 1 thousand roubles, but this amount could be raised to 10 thousand roubles and to enter similar restrictions to other agencies. This will save the courts from the flood of cases and allow judges to focus on more critical processes, says Titaev. Such changes will not require decisions at the political level, but significantly improve the situation.

With the participation of Anton Baev