Not only the far East

PJSC “Pacific investment group”, the owner of which, according to SPARK, is Sergey Darkin, has applied for participation in auction on purchase of 100% shares of OJSC “Seagull”, the message posted on a Single electronic trading platform. Until February 2012, Darkin held a post of the Governor of the Primorsky territory, July 2012 to 2015 he was Deputy Minister of regional development.

The representative of PJSC “Pacific investment group” Kristina Kudryashova Darkin has confirmed its participation in the auction. For what purpose the company wants to purchase land and objects, she said. “Comment on this topic, we will be ready to give after the auction”, — said Kudryashov. 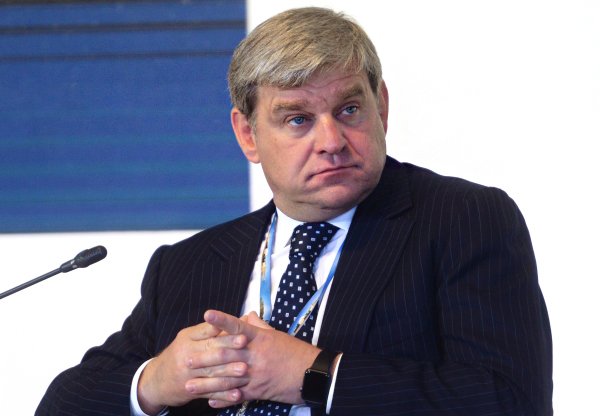 The auction must pass on Tuesday, April 26.

The Bank of Moscow put up for auction 100% “Seagulls” at a starting price of 4.2 billion rubles in March of this year. Lot includes right of claim of the Bank of Moscow to “the Seagull” in the amount of actual debt to the Bank under the loan agreements; the sum of claims amounts to 1,167 billion roubles.

Pacific investment group (TIGER) was launched in December 2014 in order to attract private investment to the far East, said on the company’s website. “Our work aimed at the realization of profitable investment projects that will contribute to the development of the Far East and economic and trade ties with major Asian economies, particularly with China”, — stated on the website.

Plus a restaurant and a medical center

On the balance of “the Seagull” are two of the area between Ostozhenka and Prechistenskaya embankment, as previously reported “Vedomosti”. Help to a potential buyer States that the asset includes pool building, construction in progress, the venue is in Turchaninov lane and medical center on ulitsa Prechistenka.

According to the auction documentation does not say whether the new owner of the site to change its purpose. The press service of VTB Bank (shareholder of the Bank of Moscow) has refused to comment on the issue. In a press-service of the complex urban policy and construction of Moscow has not responded to the request .

If the object does not represent a historical value, the owner may do whatever you like in accordance with the town planning requirements, including raze it and build on site a new facility, says real estate attorney for the law firm Sameta Paul Cooper. “If we are talking about a socially significant facility, the city may experience a conceptual agreement, but restrictions on the level of legislation there is,” he commented.

Applications for participation in the tender also gave the company “Cascade” and open company “Prospect”. The ownership of these companies failed. The representative of the auction organizer LLC “BM Project” Catherine Novak refused to reveal before the auction of the INN and the owners of the company. From comment on this topic refused in a press-service VTB. Earlier, the representative of the press service of VTB said that the company was put up for auction in the programme of non-core assets of the VTB group.

The control over OAO “Chaika” Bank of Moscow received in 2012. Previously, he belonged to the former President of Bank Andrey Borodin and shareholders of the company. The Bank, the asset got as compensation from a number of troubled borrowers associated with the former management of the Bank, told “Vedomosti” employee of the press service. In 2013 the Bank of Moscow was going to sell “the Seagull,” wrote Forbes. Then in the leadership of VTB said that talks with potential buyers pool.

VTB group since February 2011 during multiple transactions consolidated 100% of Bank of Moscow: the annexation of the purchased Bank to VTB is scheduled for may 2016. Almost immediately after the first deal top managers of VTB said that more than half of the loan portfolio of the Bank of Moscow (about 150 billion from 282,5 billion rubles) was accounted for by a dummy company associated with the President of the Bank Andrey Borodin and his subordinates. VTB was going to return the assets that either belonged to Bank of Moscow and were placed at third-party entities, or acquired on its loans. The sale of these assets would help to repay problem debts of Bank of Moscow.

The Bank of Moscow will sell assets in the sphere of alcohol production, film industry, collection and processing of waste, which he consolidated in the respective holdings, within one or two years, celebrated in 2012 the Deputy Chairman of VTB Andrey Puchkov.

Almost immediately — in 2011 — under the control of the Bank was returned to 94.1% at the Moscow inter-Republican winery (MMVZ) and 94.4% of factory of sparkling wines “cornet”, before that they belonged to Borodin and structures were purchased for a nominal fee. In June 2014, the Bank of Moscow put up both plants for sale as a single lot for 2.5 billion rubles To the plants was claimed by a little-known firm “Lacerta”, but in the end did not buy the company even at the initial price. In February 2015, the Bank filed a court statement on the recognition of bankrupt factories.

Also by July 2012, the Bank acquired the company “Terra-investholding” specializing in agribusiness: at the time she owned 20 farms with a land Bank of 143.2 hectares in the Central, Volga, southern and Siberian Federal districts. VTB had to invest “several hundred million rubles” to save the production. In early 2014 the company was still looking for buyers.

Another non-core asset for the Bank of Moscow became “Investlesprom”, ranked among the country’s largest forestry holdings. The investigation established that Borodin and his first Deputy Dmitry Akulinin used their official powers for illegal transactions on purchase and sale of shares “of Investlesprom”. In September 2014, Sistema completed the acquisition of the main enterprises of “Investlesprom” — “SPPM” and “woodworking Project”.

Also in 2014, the Bank of Moscow has sold the unfinished shopping and entertainment center River Mall on the territory of ZIL to the structures of the former owner “Rosbilding” Sergei Gordeev, and office and hotel complex on Olympic Avenue — group “Bin”.

In March 2015, the Bank of Moscow filed a petition in the court demanding to declare bankrupt Stolichnaya insurance group, which was created by the Bank with participation of the government of Moscow at Borodino.