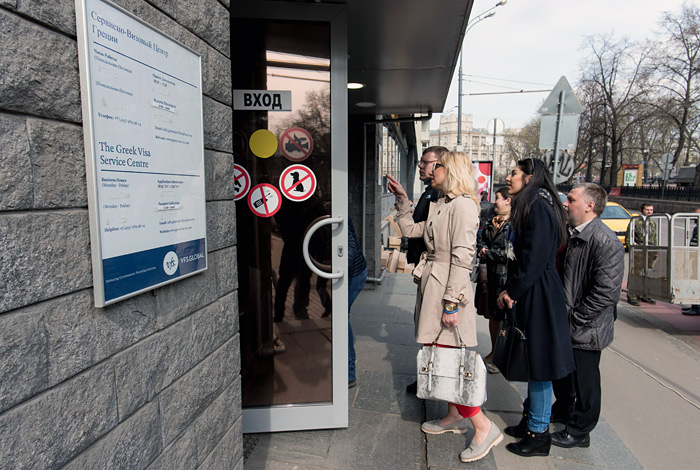 Moscow. April 25. Russia has not been a single case of flight cancellations or single trips of tourists because of delays in the issuance of visas Greek, is spoken in the official statement of the Greek foreign Ministry released on Monday.

Thus, the office commented on the information that the Consulate of Greece in Moscow has accumulated thousands of passports of Russian tourists, who planned the trip for may holidays.

According to the Russian Union of travel industry, due to the limitation of entry to apply for a visa, entered the Consulate last week, many tourists do not have time to apply for visas in advance. On Friday, the restriction was lifted, and visa centers have accumulated a huge queue. The rest of thousands of tourists were in jeopardy.

“Photos with a large number of interested near the visa application centre is the only instance in which one of the two visa centers, which operates a Consulate General in Moscow, accepted clients without an appointment, contrary to standard practice. On the same day, the order was given to both the visa application centre worked by appointment only”, – stated in the message of the Greek foreign Ministry.

The Department reports that within a few months of implementing a plan to strengthen consular missions in Russia and other countries in connection with the introduction of biometric Schengen visas. In particular, in Moscow the Consulate General is reinforced by eight employees of the foreign Ministry, in addition to existing employees.

“15 employees of the Ministry will arrive in early may and another 15 – until the end of may. Also will be recruited 55 seasonal workers from local residents. Since mid-April has increased the number of jobs for processing visas from 32 to 47, the installation of 30 additional workstations will complete before the end of June”, – stated in the message.

According to the Greek foreign Ministry, its purpose is to Consulate issued visas within ten days.

“In any case not to exceed this limit, while efforts are being made to have the visa issued as soon as possible. The Consulate General in Moscow appealed to the travel agents with a request to provide a modern presentation of the request on behalf of the tourists. At the same time, according to the Consulate General there was not a single flight was cancelled trips or individual tourists because of the delay in the issuance of visas”, – reports the Agency.

Last Friday, the Greek visa center in Moscow on Nikitsky Boulevard, which serves clients of travel agencies that survived the invasion: a huge queue of those wishing to submit documents for visas and biometric data along several buildings. People were in total about five hours. The hype preceded the recording restriction on filing, which is April 13-14, entered the visa application centre. This was done at the request of the Consulate: it staff do not have time to handle incoming requests.

In this situation the visa application centre was ready to work round the clock and on Friday and on the weekend 23 and 24 April to accept the documents of all applicants. Tour operators, in turn, expressed fears that problems will arise at the Consulate, because it may not have time this week to process so many documents.

Greek authorities have repeatedly stated that they expect the growth of Russian tourist flow to the level of 2013, almost 1.4 million trips. According to the PCT, tour operators still two or three weeks ago highlighted the growing demand for Greece compared to the same period last year by 40%. But as soon as there is information about the recording restriction on delivery of documents, booking declined.