The government of Crimea has found investors who will implement a major agricultural project in the West of the Peninsula, according to the site “Investment portal of the Republic of Crimea”. As follows from the materials of the site, the Crimean government gave two companies — OOO “Pearl” and “Our Crimea” — 8,4 thousand hectares of vineyards.

“Pearl” signed an agreement for the lease of 3,4 thousand hectares in September 2015, the contract is valid until 2064. These lands belong to sue “Magarach” and is located in the Bakhchisarai district of Crimea, which is considered one of the best for growing grapes on the Peninsula. The amount of the investments in the project amounted to 1,075 billion.

“Our Crimea” has concluded the investment contract on five months later — in February of 2016. The company received rent for the same 49 years of 5.02 hectares and the property complex of the state agricultural complex “Grape” in the village of Kolchugino, that is 20 miles from land “Magarach”. The amount of the declared investments — 1,029 billion rubles.

According to the Union of winegrowers and winemakers of Russia, the total area of the Crimean vineyards now does not exceed 35 thousand hectare agricultural Farm with 8.5 hectares — assuming that there will be planted the vineyards — will be about twice as large as the famous “Massandra” subordinated to the presidential administration of Russia.

According to the head of the Union of winegrowers and winemakers of Sevastopol Pavel Shvets, the majority of the old vineyards of the Crimean enterprises are in poor condition — requires stubbing and laying of new. Investment in tab 1 ha of new vineyards Shvets was estimated at 1.2 million rubles, that is, if “Pearl” and “Our Crimea” will decide to plant grapes in the entire rented space, they needed more than 10 billion rubles. 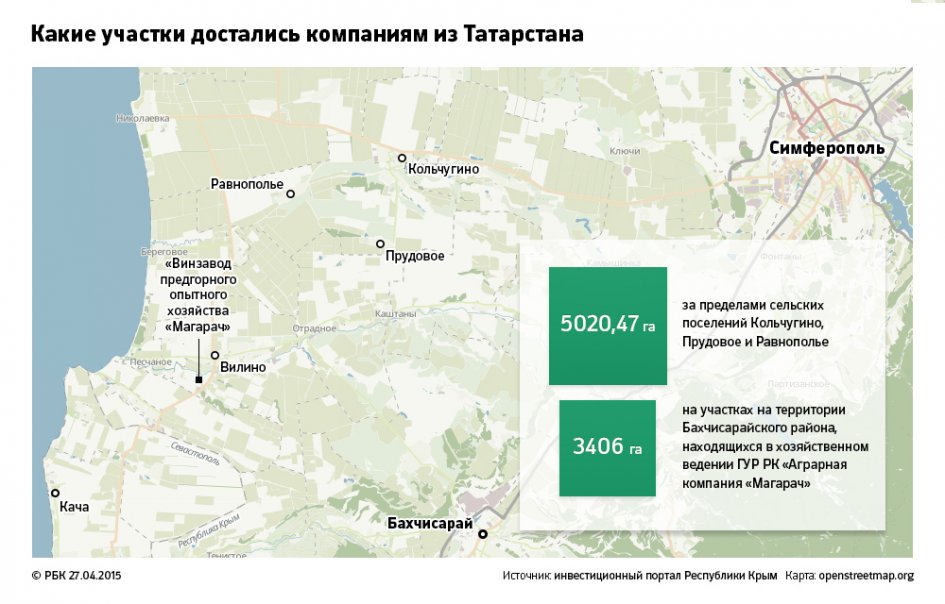 The owner of the company “Legend of Crimea”, the Vice-President of the Union of winegrowers and winemakers of Russia Mikhail Shtyrlin said that “Magarach” and “Grape” the last two years have actively encouraged investors from Tatarstan. “There is no more 1,5–2 thousand hectares of fruit-bearing vineyards, but they are old and untended, and the winery in the village of vilino (part of the farm “Magarach”. —) it is easier to demolish and rebuild. All this will require massive investments and labor. There it is possible to plant the grapes at least 5 thousand hectares, but it will take, of course, a lot of time,” he said. The return on investment is possible not earlier than in five years, said the head of the Union Leonid Popovich.

According to the Federal customs service, in 2015 in Russia imported 404 million liters of wines and wine materials, which is 13.9 percent lower than a year earlier. The import only still wines fell by 32.6%, to was 167.2 million L.

At the same time up went the figures of domestic producers: according to Rosstat, the production of wine in Russia (including from imported wine materials) grew by 25%, to 400 million L.

And “Pearl”, and “Our Crimea” were registered in late may 2014 in Kazan. The founders of the “Pearls” were made by Arthur Egorov and Nelia Popova, “Our Crimea” has registered the same Adrian Yegorov and Trofim.

Arthur Yegorov, according to the national media, is the son of Ivan Yegorov, Director General of one of the largest holdings of the Republic — “AK Bars”. Egorov, Jr., according to SPARK, holds the position of General Director of Zelenodolsk milk processing plant included in the “AK bars”.

On the website of “AK Bars” says that he manages a group of industrial, construction, agricultural, food, transport and trading enterprises in the Republic of Tatarstan. The holding company controlled by the Tatarstan government: according to SPARK and the annual report of “AK Bars” for 2014, 42,35% of HC “AK bars” belong to the Republican Ministry of property.

Now the structure of the owners of the Pearl “and “Our Crimea” has changed, and the companies were re-registered in Crimea. Now the owners of 50% of the “Pearls” are Egorov and Camilla Buzdugan (OOO “Germes”), still 25% owned by the chief specialist of the Department of economic and private security “AK Bars” Linaro Abdullin and other partner Egorova Jonah Malaya.

“Our Crimea” now three co-owners: one previous — Adrian Trofim, two new — Abdullin and “the Palace site”, which is 100% owned by the CEO of the state company “Tatspirtprom” Irek Minnahmetov.

General Directors of state-owned enterprises themselves “Magarach” and “Grape” in the spring of 2015 are also natives of the “AK Bars”, it follows from the SPARK database, respectively Airat Fatykhov, this led to within the “AK bars” agricultural farm “Volga”, and Railya Sergunina, ex-member of the Board of Directors of the holding company “AK bars”.

“Currently, I am not a member of the project and came out from among the co-founders of these companies, said the Minnakhmetov. — A group of companies where I am a co-owner, decided not to pursue this line of business”.

To obtain comments from Egorova-Junior Abdullina and failed: their organization has reported that businesspeople are on the road,” and promised to submit the request.

In the spring of 2014, Tatarstan President Rustam Minnikhanov signed with the leadership of the Crimea agreement on cooperation. “This does not mean that we hand out money, but I will repeat — the Crimea is very attractive to investors, and we are ready to implement its projects in different sectors — in tourism, in business”, — said Minnikhanov, emphasizing the desire to help the Crimean Tatars, who were called “brothers.”

Harvested grapes, according to Popovic, can go on the sale of Russian wineries, and the Kazan winery, part of “Tatspirtprom”.