As the rocket flew away

The re-launch of a Soyuz with three research satellites caused less excitement than the first, unsuccessful. At least so it seemed at the spaceport. At the observation point of the chiefs of Roscosmos and space institutions was less than the day before. Branch Director of the “Rosatom” Konstantin Chmarov assured the correspondent that this time the system is OK. According to him, the day before the automated control system signaled failure in the fuelling site.

The rector of the Samara state aerospace University (developer of two of the three satellites, which brought into orbit the “Soyuz”), Eugene Shakhmatov before the second run he said that “if there is no certainty, it is always better to postpone”. To his companions it was a pilot launch. Their development, according to Shakhmatov, cost about a billion rubles, which the University allocated by the government.

Soon those present at the Baikonur heard from the speakers warning of one-minute readiness, and the traditional “key to start”. Then he heard the command, “drainage”, which broke after the start a day earlier. Then from the rocket departed contact the mast, and from the speaker we heard “start!” In the words of the speaker, the “zero seconds have passed lift-off” the rocket began to take off.

The crowd in the spaceport happily buzzed, someone shouted “hurrah”. From the rocket separated side blocks, followed by the second stage. For 520 seconds from the third stage separated the head “Volga-006” with three satellites and went into orbit. “End of report” — sounded from the speakers. Those present began to hug each other.

Half an hour later reporters opened access to the platform launch pad. There was already the General Director of Roscosmos Igor Komarov. “It’s a Sunny day in all senses!” he said. All ground infrastructure worked well, specifically with land-based equipment became the reason of cancellation of start a day earlier, he explained. According to him, the problem originated with one of the cables. In the end did not drain the closed gateway and ground equipment did not respond to a signal, told one of the workers of the East. He explained that the repair required a fuel drain and it took most of the time.

All three satellites put into orbit, said Roscosmos two hours after the successful launch. Komarov said that following the launches scheduled for the second half of 2018. “In the second half of 2018, we plan to implement with the Eastern two launches. In the first it is planned to put into orbit two spacecraft “Canopus” and the satellite “meteor” and a different payload,” — said the head of “Roskosmos”.

The carrier rocket “Soyuz-2.1 a” was put into orbit three Russian spacecraft “Lomonosov, AIST-2D” and SamSat-218 on the morning of 27 April. However, a minute before the start of the run was postponed. Komarov said that “there was an automatic stop start” because of failures in the automated control system. “RIA Novosti”, citing a source reported that the launch may be postponed for an indefinite period of time, as still not established the cause of the failure. However, in the evening, the Eastern employee reported the Agency “Interfax” about the successful replacement unit ground in the control system, which happened to fail.

Who will be punished for the problems with the first run

According to the newspaper “Kommersant”, immediately after the launch of Putin, who decided to stay at the spaceport on “back” day, summoned Deputy Prime Minister Dmitry Rogozin, the head of NPO Avtomatiki, Leonid Shalimov, and Komarov and his Deputy Alexander Ivanov. Putin reprimanded Rogozin, a severe reprimand Komarov and the decision about incomplete official correspondence Shalimova. The paper argues that the cause of the problem Wednesday was the fuel valve cable (the cable to the launch site, according to the newspaper, was placed NPO automatics). The day before, on Wednesday evening, at the meeting, Putin said that the failure of the launch is associated with “carelessness”. 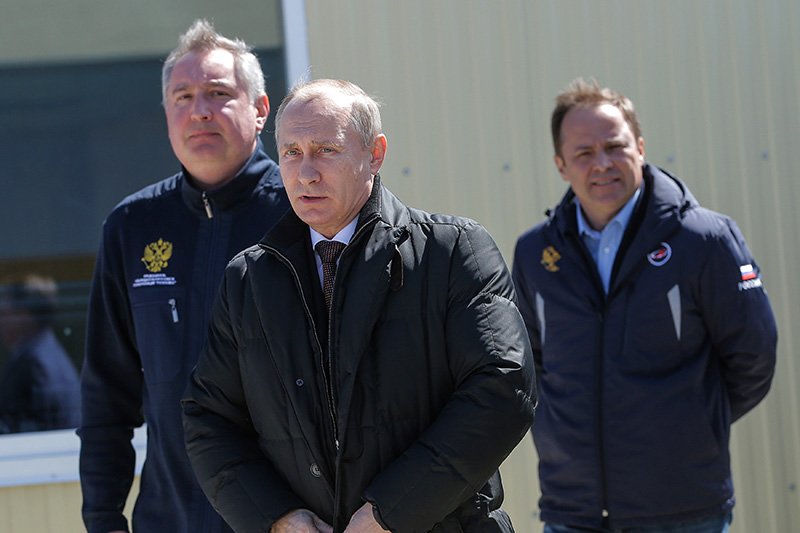 Deputy Prime Minister Dmitry Rogozin, the Russian President Vladimir Putin and head of Roscosmos Igor Komarov (left to right) at the Vostochny cosmodrome before the launch of the carrier rocket “Soyuz-2.1 a”

The President’s press Secretary Dmitry Peskov confirmed the imposition of reprimands, without specifying in what form.

A source close to Roskosmos, says that the reprimand officials announced orally question of formal disciplinary penalty is not. Can be made an official decision about incomplete official correspondence of the General Director of NPO Avtomatiki, Leonid Shalimov, but it is not the level of the President to make the decision will be his supervisors, he says. Sands on Thursday afternoon, reported news agencies on making decisions Shalimova.

The NGO representative did not answer the call . On the website of the NGO says that this is one of the country’s oldest companies, which is engaged in the development of control systems and radio electronic equipment for rocket and space technology.

The representative Rogozin was unavailable for comment, a press Secretary of the Roscosmos nothing is known about the reprimands.

Rogozin has repeatedly appeared in the centre of public political and diplomatic scandals. A month ago, Transparency International published an article stating that he may be one of the owners of apartments in a luxury residential complex. According to experts, this apartment with an area of 346 sq. m must be worth at least 500 million rubles Rogozin Himself later denied this information: he said that after his appointment to the government was requested to grant him use of the apartment.

In April 2015, Rogozin visits the Norwegian archipelago of Svalbard has caused indignation of the Norwegian Ministry of foreign Affairs: Deputy Prime Minister was included in the list of Russian politicians and businessmen, who are banned entry to the EU. Norway has acceded to all packages of the EU sanctions. Rogozin said that “after the Eulogy”, and the Russian foreign Ministry said that the officer did not violate the laws of Norway.