After Sberbank, the market leader in deposits, lower interest rates in the near future are preparing four credit institutions, according to a survey of 35 of the largest banks on volume of a portfolio of deposits of physical persons by 1 April 2016 (according to the rating Agency RAEX).

Their plans to change interest rate policy shared with 23 participants of the market. Half of them (12 banks) have taken a wait: the banks do not exclude that will adjust the yield of deposits, if the regulator or change the key rate will continue to decline rates at major competitors. In seven of the surveyed banks do not intend to revise interest rates on deposits in order to ensure the flow of client funds on Deposit.

Monday, April 25, Sberbank announced that it has lowered rates on 0,5–1,05 p. p. depending on the term and amount of the contribution. For deposits in the currency of the savings Bank has lowered rates nearly to zero: now the minimum bet is 0.01%. Sberbank is the dominant Bank in the Russian market, which is likely to be followed by other players, said Fitch analyst Alexander Danilov. 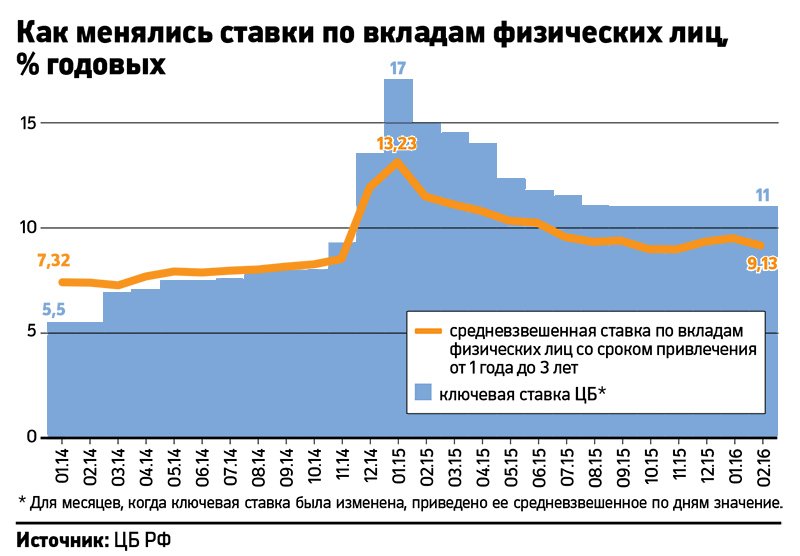 Four banks indicated that it is ready to lower Deposit rates in April and early may. In particular, SMP Bank intends to adjust rates before the end of April, and the changes will affect the entire line of deposits, said Vice-President of the Bank Roman tsivinyuk. “The Bank has sufficient liquidity, therefore, in the current environment, is willing to reduce the cost of raising funding. In roubles the rate will be reduced by 0.7 percentage points on foreign currency deposits — from 0.2 to 1.3 p. p., depending on the operating mode of the contribution,” he said. Now the maximum yield of ruble deposits from SMP Bank for a year is 10.3%, in foreign currency, the Bank offers depositors rates from 1.2 to 2.9% per annum depending on the amount.

In Gazprombank reported that in the short term intend to lower interest rates on foreign currency deposits by 0.2–0.7 p. p. “For ruble deposits will be held to be an adjustment in rates for individual terms, but in General, a significant reduction is not planned”, — said the Deputy chief of Department of retail products of Gazprombank Julia Elsukova. Now rates from Gazprombank under annual deposits in roubles range from 6.5 to 10.5% per annum depending on the amount, in dollars, the Bank offers a yield of 1.05 to 1.8% per annum, and in Euro from 0.5 to 1% per annum.

“In the near future the Bank plans to lower interest rates on deposits in rubles. Revision of rates downwards planned and due to the termination of seasonal offers on deposits”, — said the head of the block “retail business” PSB Leonid Kachalov.

Raiffeisenbank said that also intend to review the rate of return on deposits of physical persons to the downside.

The second largest (after Sberbank, the market participant deposits VTB24 reported that has not yet made a decision to change rates on ruble nor nor on foreign currency deposits. “In addition to the changes to our major competitors is dependent on many different factors: including the level of liquidity of the Bank, plans for the formation of passive base, the maturity of old deposits”, — said the press service of the Bank. However, earlier, the head of VTB24 Mikhail Zadornov said that the Bank will cut Deposit rates due to the growth of deductions in insurance Fund ASV. “The increased allocations to Deposit insurance Fund will affect the yield on Bank deposits. We will not be able to keep Deposit rates at the level at which we were holding”, — said the banker at a press conference April 21, 2016.

In mid-April, the Board of Directors ASV has decided to set the rate of premiums that banks pay into the insurance Fund. The new rate of 0.12% will be operational from the third quarter of 2016. Since 2008, the rate of insurance contributions to Fund the DIA is 0.1%.

Deposits of natural persons in numbers

On 18,7% would have increased the volume of deposits without a currency revaluation

RUB 8.8 bn in day the average was the growth of deposits in January—November of 2015 without a currency revaluation — 6.2 billion rubles.

91 of the 100 largest retail banks by the end of 2015 has reduced the interest rates on deposits. In eight banks rates increased, one remained unchanged

In anticipation of the Central Bank and the actions of competitors

A number of market participants have already reviewed all the terms and conditions, but ready to continue to reduce the rate of return on deposits in case of reduction of the key rate of the Bank of Russia. The next meeting of the regulator will be held on Friday, April 29, most experts surveyed believe that the rate will remain unchanged at 11%.

As reported by the head of Department of passive operations of the Ural Bank for reconstruction and development Olga Aksenova, in mid-March, the Bank adjusted the interest rates on foreign currency deposits, reducing them by 0.25 percentage points in the second quarter has no plans to change them. “But in the case of reducing the key rate of the Central Bank is likely to be produced by adjustment of the yield deposits, but a slight — on level of 0.25–0.5 percentage points on deposits in rubles,” she says. 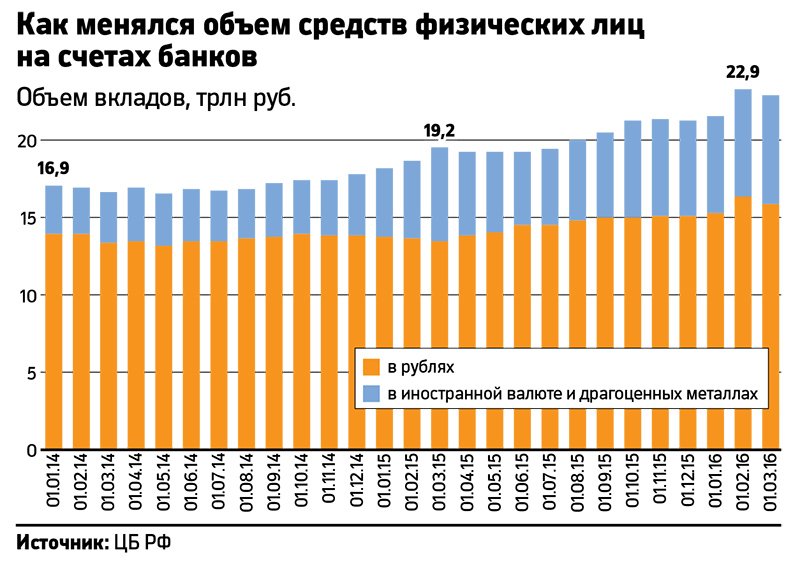 According to Olga Aksenova, the yield on deposits, the market has almost stabilized. “On foreign currency deposits for most banks rates have reached a minimum, which is associated primarily with no need of foreign currency liquidity, special adjustments should not be expected,” she said. The banker believes that a small adjustment in Deposit rates is possible in the second quarter of 2016, while it is more likely for deposits in rubles, than in foreign currency.

The Director of Department of retail products and marketing of ROSBANK Michael Damrow reported that in April the Bank has revised interest rates in rubles, reducing them on average by 0.3 percentage points In the short term ruble rates likely will remain at current levels, a modest correction to the downside expected in the second half of the year”, — said the banker.

Chief analyst of the Bank Natalia Vasilyuk says that the interest policy of banks depends not only on the level of the key rate. “The value of the key rate does not change from August 2015, but since that time, the yield of deposits and lending rates declined markedly,” she recalls. With the beginning of the year, according to the Central Bank, the yield of deposits in top-10 largest banks fell by 0.35 percentage points to 9.74% per annum, while the rate control has not changed. According to the analyst, an increasingly important factor for the banks is inflow of money into the banking system, particularly through the budget. In addition, notes, Vasiluk, in conditions of low demand for loans in most credit institutions do not have incentives to increase the attractiveness of the conditions of the Deposit.

Alfa-Bank, “Opening”, b & n, “the Rebirth,” “the Russian capital” and Bank of Moscow said that while no decision: they are monitoring the situation on the Deposit market and intend to act in accordance with market conditions.

Rates will remain the same

Seven credit institutions stated that they did not intend in the near future to review the rates on deposits. “We expect that this will provide additional customer interest in our deposits in its home territory in the Ural region”, — reported the press service of SKB Bank. Dynamics of rates on deposits depends on the situation on the market of financial services, said the press service of the Bank “Ugra”, which also plans to reduce the rate of return on deposits. As a rule, the Bank adjusts rates at least once a month, but “how to change the yield of deposits in the conditions of unstable economic situation is difficult to predict,” reads the response of the press service.

According to the Director of Department of deposits and Commission products “Renaissance Credit” Galina Utkina, now “rates are at a comfortable level for the Bank”.

The Bank “home Credit” was told that in late 2015 or early 2016, the Bank reduced the yield on foreign currency deposits. “But in February of this year, we noted the increase in disbursements of new loans in March, a decision was made about a small increase in interest rates on ruble deposits for a more active attraction of funds to deposits”, — said the head of Deposit and payment products Nadezhda Kulikova. According to her, now the Bank has no plans to revise the rate of return on deposits.

Also do not plan to in the near future to reduce rates Moscow credit Bank, Sovcombank and Russian standard”.