The world’s media detailed coverage of the concert of Russian musicians released two months ago by militants of the banned in Russia “Islamic state” Palmyra. They believe the concert organization is well prepared with a gesture of the Kremlin, pursuing the goal of image in the eyes of both foreign and domestic audiences.

The contrast between the action on Thursday and penalty in the same place a year ago 25 of the Syrian military, which was committed by Islamists, “was made intentionally in order to emphasize the role that Russia played in helping the liberation forces of the Syrian Palmyra and which it considers undervalued,” writes The New York Times. Moreover, Moscow has shown that “fighting on the side of civilization against barbarism”.

At the Russian audience the concert was supposed to evoke a sense of pride — the concert was broadcast live, the participants via video link from Sochi welcomed President Vladimir Putin, and scenes from Palmyra were interspersed with footage of the destruction by ISIS of cultural values of this ancient oasis, the NYT notes.

Putin’s statement and the very premise of the concert, according to The Washington Post, created “artificial optics” about the role played by Russia in the Syrian conflict. Officially, Moscow claims that in the course held from September to March the operation was killed no peaceful Syrian, although human rights groups claim that during air raids killed at least 2 thousand people, besides Russia for five years has protected the Syrian regime from international sanctions, while the war has claimed the lives of 250 thousand people and forced millions to flee that middle Eastern country, the newspaper continues.

“Concert in the liberated city was a logical, even a brave step, given the former status of Palmyra as a popular tourist hub and the venue of music festivals, but the appearance of the [cellist Sergei] Roldugin made eyebrows rise”, — says the American TV channel NBC. 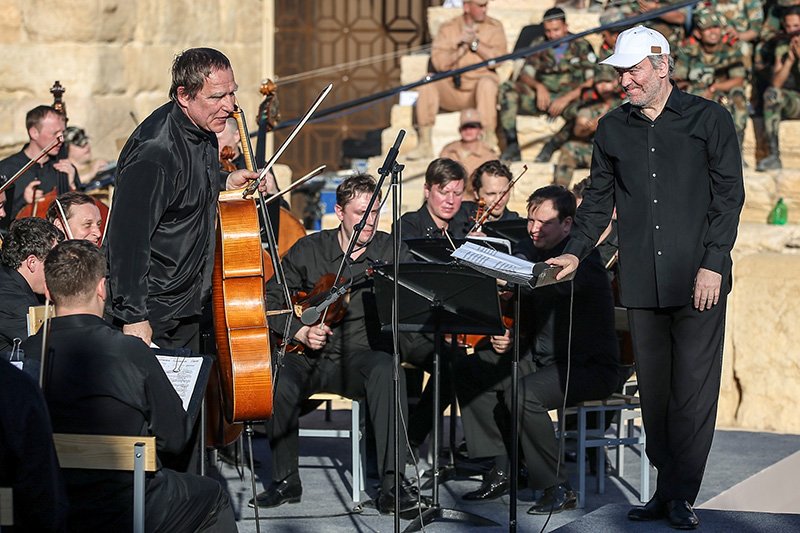 Cellist Sergei Roldugin (left) and conductor Valery Gergiev (right) during the concert “a prayer for Palmyra. Music enlivens the ancient walls of the” Symphony orchestra of the Mariinsky theatre on the site of the Roman amphitheatre, may 6, 2016

64 year old musician has never had much recognition in Russia or abroad, but became famous when the journalists involved in the analysis of unopened correspondence Panamanian law firm Mossack & Fonseca, found that Roldugin is a key figure in one of the monetary schemes, reminds that media. Putin himself defended his old friend, saying that Roldugin is a philanthropist, not a Wheeler-dealer, and the money spent for the purchase of violins made by Stradivarius, which then passed into the property of the Russian state, says NBC. According to the TV company, Roldugin refused to communicate with the press after the concert, he was immediately taken to a personal military jeep with armed guards. His appearance in Palmyra of The British The Guardian considers a sign that the musician remains in favor with the Kremlin.

The New York Times reminds us that active support of President Vladimir Putin and famous conductor of the concert, Director of the Mariinsky theatre Valery Gergiev. Eight years ago, he also acted in Tskhinvali after the Russian victory in the brief war with Georgia, and in March last year, along with other loyalist-minded cultural figures signed a letter in support of the annexation of Crimea, NYT lists.