Parades with the participation of troops of Russia’s armed forces and Pro-Russian regimes were held may 9 in only 26 cities in the country, but also abroad — in places of hostilities and frozen conflicts.

For the first time Russia’s military might in Victory Day was demonstrated in Syria. The parade at the Russian base in Latakia Hamim was held with the participation of the Russian and Syrian military.

A parade on the airfield the commander of the Russian group of forces in Syria, Colonel-General Alexander Dvornikov. Following the ceremonial calculations of Russian troops and Syrian armies on the left column equipment: the armored car “Tiger”, the cars URAL-4320 with the D-30 howitzers, machine communication, P-166, BTR-82M and anti-aircraft missile and gun complexes “Pantsir-s”.

Appeared on the parade system s-400, which is also involved in the Syrian operation and control the sky over the Russian base. Part of the complex “Triumph” in Moscow parade has been called into question.

In addition to the walking columns and equipment in the parade were involved helicopters, carrying on combat duty on the air base. As the correspondent of “RIA Novosti” with the event, at the sky rose transport helicopters Mi-8AMTSH helicopter, two combat helicopters Mi-35, brand new attack helicopters Mi-28N “Night hunter” and Ka-52 “alligator”. 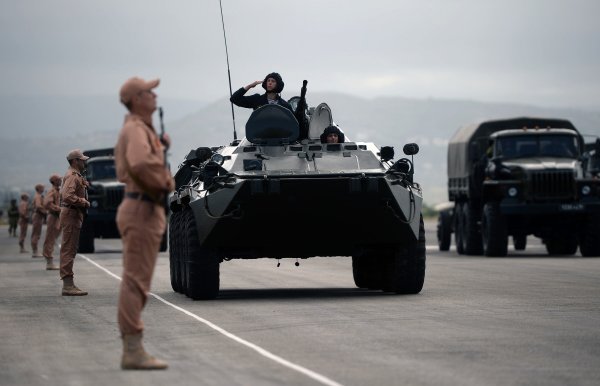 The BTR-82A of the column of mechanized troops during training for a military parade, dedicated to the 71st anniversary of the Victory in the great Patriotic war, at the airbase “Hamim” in Syria

After the helicopters in the sky over the Latakia, there was a Russian aircraft, continuing combat missions in Syria. In honor of the 71 th anniversary of the Victory over the system has passed multi-purpose fighters su-30SM, the latest fighter generation “4++” su-35S and Sukhoi su-34.

According to estimates , at the moment in Syria is about 20 aircraft, air defense systems, helicopters and about 2 thousand military.

The regiment on the Dniester

Another case-military demonstration took place in Transnistria. In the unrecognized Republic on 9 may for the first time held a joint Transnistrian-Russian military parade, which was attended by units of the Operational group of Russian troops that support the world since 1995.

Opened the parade the T-34-85. It was the exact copy of the Victory banner, donated a few years ago, Vice-Premier of Russia Dmitry Rogozin.

In total, the parade was attended by 36 pieces of equipment of the Transnistrian and Russian armed forces, reports TASS.

On the 70th anniversary Victory military parade in Transnistria was carried out. “I believe that we will sooner or later, and sooner is better, we will live in a single (with Russia) of the country”, — said after the parade Shevchuk (quoted by “RIA Novosti”).

“Grads” in the Caucasus

In the military parade in Tskhinvali, the capital of the partially recognized Republic of South Ossetia, as a year ago, took part of the column units of the 4th military base of the Russian defence Ministry and border Guard of FSB of Russia.

On the Central square of the city marched 23 main calculation and the seven colour groups of the defense Ministry, interior Ministry, emergencies Ministry, Border service of the KGB, the Cadet school, as well as the 4-th Russian military base and border Guard service, reports “RIA Novosti”.

In total, the parade was attended by more than 900 personnel and 30 units of military equipment. At the parade were shown the anti-tank guns, howitzers, machine guns, multiple rocket launchers “Grad”. 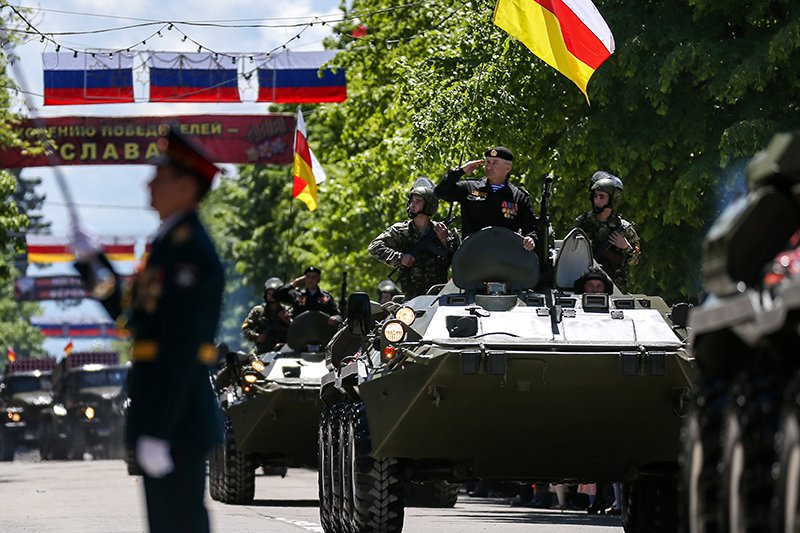 Soldiers during a military parade marking the 71st anniversary of the Victory in the great Patriotic war, Tskhinval, South Ossetia

The President of South Ossetia Leonid Tibilov at the parade, thanked Russia for the protection of the Republic in August 2008.

Ambassador parade in March “Immortal regiment” was attended by more than 4500 inhabitants of the Republic.

In Lugansk may 9 at Theater square were about 1 thousand people and about 70 pieces of military equipment. In addition to the military parade was attended by law enforcement officers and cadets. The last in the procession, the participants of the action “Immortal regiment” with photos of their relatives killed during the great Patriotic war.

The parade was reviewed by the head of unrecognized Republic Igor Carpenter, the parade, head of the Department of militia Oleg Anashchenko.

Last year, the anniversary of the victory of the Republic was celebrated modestly. Then at the Central square of the city parade were about 800 soldiers and armored column consisted of 30 machines.

In Donetsk in the parade this year was attended by 45 units of military equipment, including armored personnel carriers BTR-80, T-72 tanks, multiple rocket launchers “Grad” and self-propelled howitzers “Gvozdika”. In addition to modern technology in the participated fighting vehicles of the great Patriotic war. As part of the parade columns took place a legendary “Katyusha”. The number of participating soldiers was not reported.

Songs of military years performed by a brass orchestra of the Donetsk Philharmonic. Brought up the rear, as well as in Lugansk, participants of the action “Immortal regiment”.

Led the festive parade the Minister of defence DND, major-General Vladimir Kononov, a parade, the head of the unrecognized Republic Alexander Zakharchenko. The celebration took place to the accompaniment of which he sang music of the war years.

At last year’s parade in the ranks were 1,5 thousand military and 30 units of military equipment. 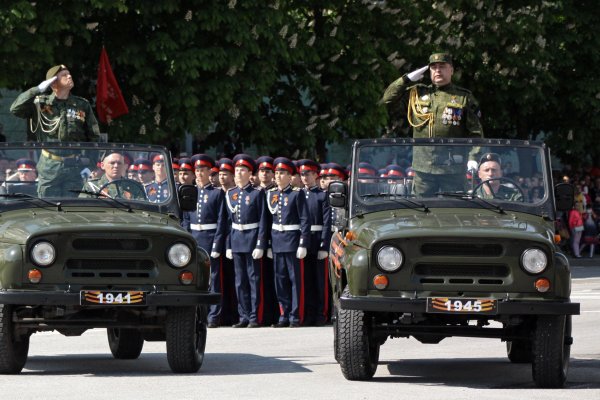 According to the head of the military forecasting Center Anatoly Khramchikhin, the parade in other countries is another way to demonstrate the military power of the state, including NATO. “The other purpose of parades is an indicator of military equipment to all stakeholders”, — says the expert.

“Parades in these republics is just the desire of a small unrecognized States to please Moscow”, — said Director General of national strategy Council Valery Khomyakov. On some kind of show of force by Moscow of the question, says the analyst. “Here it is inappropriate to talk about the expansion of influence of the Russian side, from the point of view of force is immaterial” — sums up the expert.