Aquafarm at the Palace

At the end of December 2015, the Commission on the definition of aquaculture sites in the Azov-black sea territorialno the management of the Agency granted the application of OOO “Complex” on the allocation of plots with an area of 254 hectares and 290,8 and putting them on the auction for the project of industrial aquaculture, it follows from the minutes of the meeting of the Commission. Lots 3 and 4), where it was allowed to grow Pacific oysters, Mediterranean mussels, Beluga, Russian sturgeon and pelengasa, located near Cape Idokopas near Gelendzhik. This place is in a picturesque corner of the Krasnodar territory became known through the construction of this resort, known in the media as “Putin’s Palace” — a building with an area of 17,7 thousand sq. m on a land plot of 678 thousand sqm According to the extract from the Unified state register of rights to immovable property and transactions with it (EGRP) on 28 April 2016, the owner of this resort complex is “Complex”, triggering the allocation of land for aquaculture.

What is “Putin’s Palace”

In late 2010, businessman Sergei Kolesnikov, who calls himself a former partner of the St. Petersburg friend of Vladimir Putin, co-owner of Bank “Russia” Nikolay Shamalov, wrote an open letter to President Dmitry Medvedev, which talked about his business, which he allegedly operated in the interests of Putin’s inner circle. One of the projects — construction at Cape Idokopas near Gelendzhik Palace complex. In the spring of 2011 the complex, as reported by “Kommersant”, was bought for $350 million the former co-owner Novorossiyskogo commercial sea port (NCSP) Alexander Ponomarenko. As Ponomarenko told “Kommersant”, the seller made Nikolai Shamalov.

Ponomarenko said that “we have not engaged in this project,” and sent for review to the Novel Zinoviev, General Director of TPS Group, which deals with this object”. Zinoviev said that the company will leave the questions without comment. Co-owners of TPS Group in addition Ponomarenko considered his former partner in the NCSP Alexander Skorobogatko and Arkady Rotenberg entrepreneur.

According to the extract from the USRR, OOO “Complex” owns the building “Palace of Putin” in March 2015, the land under it in may 2013. According to SPARK, since September 2013 “the Complex” belongs to the offshore company “Savoyan investments limited registered in the British virgin Islands. Its beneficiaries are not disclosed.

The Agency has appointed a contest for the requested “Complex” plots for April, but the number of bidders, “Complex” was not there. The competition on April 20 won LLC “southern citadel” from Noumea, paid for the sections 304.2 thousand RUB. thousand RUB. and 357, respectively, having received them in use for 25 years.

As it turned out , a month earlier “southern citadel” won another auction on the areas of the water area near Idokopas. Mar 25 Azov-black sea territorial management Rosrybolovstva held other auction for the distribution of plots on the Black sea near the “Palace.” They “southern citadel” won two plots and their total area is 422,1 ha, they are only intended for the production of mussels and oysters. For them, the company paid 2.36 million RUB

Thus, the total area of all sites, go to the “southern Citadel” — 966,9 ha. the Boundary runs along the coastline from the sea in Divnomorskoye up to the Cape Idokopas, and on which is situated the Palace (see map). 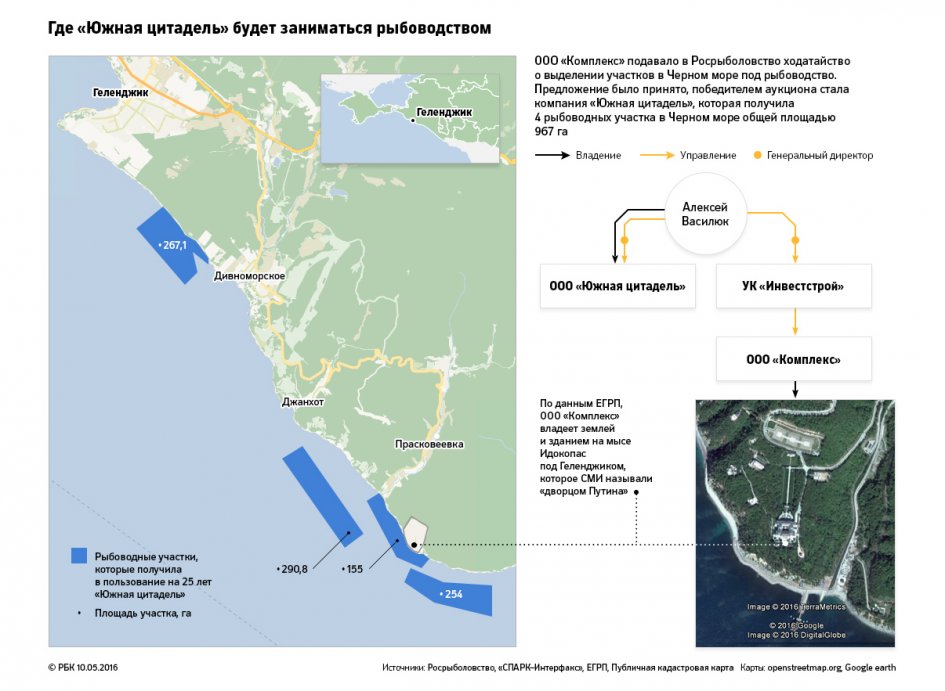 According to SPARK, CEO and sole owner of the “southern citadel”, established in July 2015, — Alexey Vasilyuk. Vasilyuk confirmed his win at the auction, but the project that took the parcels did not comment, citing commercial secrecy.

As of October 2015 Vasilyuk is the CEO registered in Moscow LLC “MC Investstroy”, which, according to SPARK, to 29 October 2015 was a management company, OOO “Complex” (which owns the “Palace of Putin”) and LLC “azure berry” (which owns a nearby wine farm).

To the question whether any “Complex” and “southern Fortress,” Vasilyuk said, “don’t know”. To review the “Complex” failed.

Chairman of the Board of Directors of “Abrau Durso” (engaged in the distribution of wines “Azure berry”) Pavel Titov said that MC “Investstroy” now is not related to the wine project.

The minimum volume of production in areas “South of the Citadel”, where you are allowed to get only oysters and mussels, to — 263,3 tons, in areas where it is expected to catch more and pelengasa, Beluga and sturgeon, to 12.7 tons. In this area it would be more accurate to organize plantation cultivation of mussels and oysters, according to the President of the Russian Association of fishery enterprises, entrepreneurs and exporters (VARPE Alexander Fomin: “the costs of organizing such production is not very large, and the demand is there”. According to Fomin, the investment in such a project can amount to several hundred million rubles, the payback period is 5-7 years. Restaurateur Kirill Martynenko, co-owner of the Boston Seafood&Bar and Torro Grill, said that after the introduction of the food embargo of the Russian demand for seafood has grown considerably.

Seafood from the European Union, the main supplier of oysters and mussels on the Russian market, included in the list of prohibited import goods to Russia in August 2014. In June 2015, the government lifted the embargo with trout fry, juvenile oysters and mussels, without which it is impossible to develop import-substituting production. The Agency said that the Russian farmers by the year 2017 produce 1.5 million oysters — third of the volume of imports in 2013.

Chairman of the Collegium of advocates “starinsky, Cartago and partners” Eugene Cartago notes that obtaining at the disposal of the water area can be connected with the desire of the owner of the adjacent territory to restrict access to your site from the sea. “In fact it is the only legal way to lock access to the object from the sea,” says Cartago. — Having the permits for conducting economic activities in certain areas of the sea, the company can provide a ban on the presence of foreign plavsredstv. To obtain a certificate stating that the finding of boats, motor boats, etc. may have an adverse effect on the business, for example, lead to the death of juvenile mussels or oysters is not difficult”.

With the participation of Anastasia Napalkova, Anna Levinsky, Anna deryabinoy.