National rating Agency at the request studied the dynamics of the overdue debt in the rehabilitated banks. For analysis were selected those who is among the 200 largest banks by asset size. Among them were 19 passing the procedure of financial recovery. Two of them — “URALSIB” and Fund service Bank — will not make statements on the required date, so to analyse the situation in them was impossible. For each Bank were taken your analyzed period: from the beginning of rehabilitation (the last reporting date, preceding the reorganization) until 1 April 2016.

Report analysis showed that nine of the 17 rehabilitated banks saw a sharp increase of hundreds of percent of arrears for the time of rehabilitation. The leader on this indicator — Mosoblbank, followed by Baltiyskiy Bank reorganization which alpha Bank started in August 2014. During this time, the overdue debt on the balance sheet of the Baltic Bank on 5847 rose%. Also more than 1000% over the time of rehabilitation has increased arrears in Bank “Solidarity”, “Taurida” and Bank “Growth”. Less than 1000% of trust Bank, Investtorgbank, BALTINVESTBANK and “Soviet”. 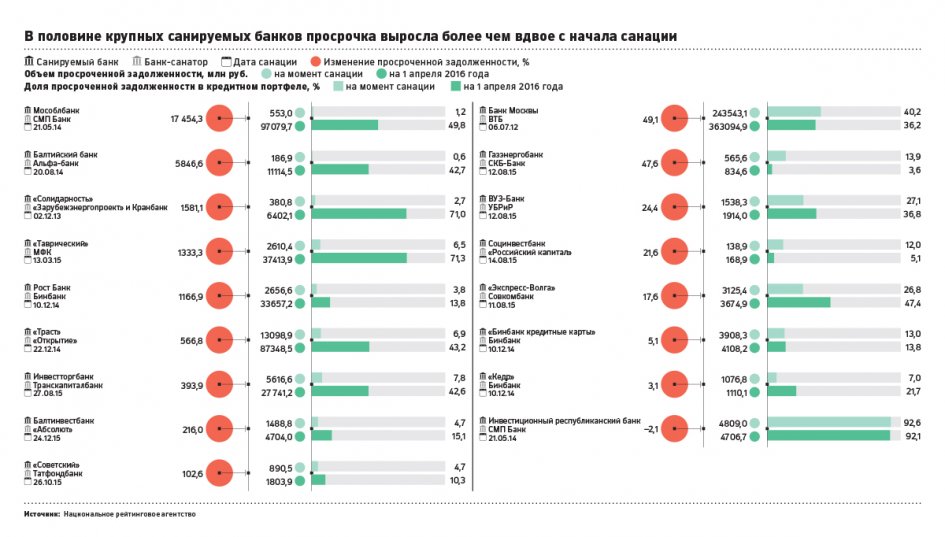 Fitch analyst Alexander Danilov as the reason of sharp growth of delay calls the inadequate assessment of condition of the Bank at the time of the decision on reorganization due to, for example, lack of time or underestimation of risks. Usually to rehabilitation or restructuring banks refinance bad loans to hide the real level of problems, but at change of the owner of the Bank is changed and evaluation of the loan portfolio, adds S&P analyst Anastasia turdyeva. “Therefore, the deterioration in asset quality is likely to continue in the course of rehabilitation, since some problems could not be discovered during the evaluation of the Bank,” she says.

The second reason for the growth of delay — may be transferred by the Bank-sanator parts are not the best loans to the balance of the rehabilitated Bank, says Turdiev. And many banks-sanatory use it, because rehabilitated the Bank may violate regulations, she adds. According to her, until the Central Bank allows to violate the norms of rehabilitated banks for a long period of time, the picture is unlikely to change.

The leader of the list — Mosoblbank — increased not only the arrears, but loan portfolio, and 384%, from 39 billion to 190 billion rubles. According to the Chairman of the Board of Bank Irina Morozova, 80% of the new loan portfolio is formed by loans of the Bank-sanator. “The transfer of the portfolio of SMP Bank legal entities occurred in 2014 and was required to ensure that the Bank began to interest income. With the same purpose SMP Bank ceded part of claims on credit agreements of physical persons”, — adds Morozov.

As tells a source familiar with the situation in the Bank, SMP could transfer loans to Mosoblbank, to reduce the pressure of regulations governing lending to related parties, and regulations on one large borrower, and not because these bad loans. “NSR is actively involved in the credit projects connected with the business interests of its owners. So, one of the key projects is the construction of the Kerch bridge”, — said the source .

Morozov said that as of April 1, 100% of overdue debts of legal entities and individuals accounted for loans granted prior to the procedure of financial recovery.

Morozova, among other things, mentions the peculiarities of accounting as the reason of growth of overdue indebtedness in the Mosoblbank.

As explained by an analyst RAEX Yuri Belikov, arrears on bad loans is manifested in the balance gradually — as the life of the loan: is the next payment, the Bank increases the delay of the corresponding payment.

In addition, before the reorganization of the management of the banks experiencing problems with the implementation of regulatory capital requirements, frequently resorted to the practice of concealment of defaults, restructurings, and on bad loans to change the maturity and payment schedules, Belikov said. The turnaround Manager brings these issues to light, objectively assesses the quality of assets, makes loans to the delay, he says.

Baltic Bank credit portfolio during the reorganization did not increase, it said in statements. Loans to individuals in the Bank decreased by 14.9%, while loans to businesses — by 3.34%. As stressed in the press service of the Bank, almost all loans to enterprises were classified as troubled debt during the interim administration in the Bank in August 2014.

In Bank “Solidarity” after a decision about rehabilitation of loans to individuals decreased by 17%, organizations — 37%. Review the Bank did not provide.

Features of accounting, as well as applying to the bankruptcy court the debtors explained the increase of delay in the Bank “Taurian”.

The Bank “trust” from January 2015, the portfolio of loans to companies grew by 81%, or RUB 43 billion, the population has decreased by 22%, or 31 billion rubles “Discovery” was transferred to the balance of “Trust” some credits, but the volume of such assets is small, it is spoken in the answer of the press service of the request . “We are talking about loans on market terms quality clients. So, for example, because in the current economic situation to form a new quality of retail loan portfolio is difficult enough, in 2015, “the Opening” gave in “trust” of the retail loans in the amount of approximately RUB 10 billion”, — said the press service.

In the Growth of the Bank since the date of decision on reorganization loans to businesses grew by 300%, or 178 billion roubles Loans to individuals, on the contrary, decreased by 25%, or 2.1 billion rubles In September 2015, the representative of the press service of the Bank Kirill Gumankov explained that the increase in the loan portfolio during the first eight months of 2015, partly secured by transfer of operating loans from the balance sheet of the Bank. “The financial recovery plan the growth of the Bank envisages increasing its corporate loan portfolio for the purposes of recovery of the capital”, — said the Gumankov. A source in one of banks — counterparties of the Bank said that on balance the growth of the Bank reflects the Bank loans, which can put pressure on his own capital. As later told the source familiar with the situation in the Bank, with balance sheet growth of the Bank was also issued about 40 billion rubles in companies associated with the shareholders. In a press-service of the Bank request about the reasons of delay of growth left without comment.

As noted by the head of group Finance ACRES Kirill Lukashuk, in the current economic environment the pace of lending in excess of 20-25% per year, already look pretty aggressive. “If it is organic business growth, a determining factor in the quality of growth will be sectoral diversification of new loans. If growth is associated with large-scale transfer of credits from the balance of the Bank-sanator, such operations must not conflict with the approved financial recovery plan. Otherwise is a matter for the attention of the regulator”, — said the expert.

At the beginning of this year, the Chairman of the Bank of Russia Mikhail Sukhov at the meeting with the bankers stated that the Bank of Russia took a decision that the regulator will apply coercive measures to the rehabilitated banks, in the event if in their activities they allow violations not related to their previous activities, not related to the problems that triggered the remediation.

As said Sukhov, new risks should be covered at the expense of the investor or the profits available on the balance sheet of the Bank. “This applies to all operations, new loans, for example, with the balance of the Bank-sanator transferred to the normal loans, which require no reserves, nothing to worry about. If issued a new loan and it requires additional reserves, they should be compensated by the profit of the Bank, any investor needs to capitalize the reorganized Bank”, — said the Deputy Chairman of the Central Bank.