Brazil’s President Dilma Rousseff will be removed from office — the majority of the members of the Senate at the end of the debate, which lasted almost a day, called for the beginning of procedure of impeachment. For the suspension of the powers of the President for six months and the beginning of a parliamentary investigation of Rousseff in this post eventually voted by 55 members of the house from 81 (for the approval needed to gain a simple majority of votes). Just the list of speakers signed up 71 Senator, each was given 15 minutes to present its position. Speaking of the senators from among those who supported the impeachment, explained that they do this “in the name of God”, “in the name of the country” or “in the name of his family”.

Now Rousseff will have to leave the presidential Palace on 180 days later on Thursday the head of state is officially informed of the decision of the Senate. During this time the duties of the head of state will be taken over by Vice-President Michel Temer. Activities Rousseff will be investigated by a special parliamentary Commission. If she’d come to believe that the President broke the law when exercising the powers to decide her fate again have the Senate. Rousseff will have 20 days to submit their objections, after which the final question of removal from office will be considered by the upper house.

Rousseff is suspected of creation of a black electoral offices for the 2014 elections and manipulation of statistics in order to present the results of her first term in the best light. Last autumn, court of audit of Brazil decided that the President broke the law on the budget, agreeing to cover the deficit of the budget through loans, which the government took under his control the same companies.

“The low quality of tax policy, the use of so-called “fiscal control” — the practice of borrowing from commercial banks to Finance budget deficits, very common in Brazil, both at the level of States and in the Federal government, ” explains the Professor of law of University of são Paulo Camila durán. But Dilma has seriously expanded its in 2014-2015, including in order to secure his re-election”.

The worst crisis since the 1930-ies

To cover holes in the budget Rousseff took due to the collapse in the economy. Falling prices for commodities, which occupy in the structure of Brazilian exports to 60%, has led to the fact that in 2014 the country for the first time since 1998, faced with a trade deficit that has exceeded $3.9 billion of the country’s GDP began to decline in the last quarter of 2013 (-0.2 percent year-on-year). In 2015, when it fell by 3.8 per cent — and this is the worst result since 1981. In 2016, according to the IMF, the result will be the same.

According to various estimates, the economic crisis in Brazil could be the biggest, at least for the last 80 years. Inflation in the country at the end of last year was exceeded by 10.6%, the highest figure for 12 years. In April, in annual terms it amounted to nearly 9.3 per cent, exceeding the most pessimistic forecasts in a Bloomberg survey of economists. The Brazilian real to the U.S. dollar over the past year fell by one-third and the budget deficit for the last three years has increased from 3% to a record 10.3% of GDP. The national debt of Brazil last year to 66.2% of GDP from 57.2% in 2014 and 51.7% in 2013.

The stock market of Brazil for the year 2015 has lost 13.3 percent. Agency S&P has translated Brazil in the speculative group in September last year. Fitch downgraded it from BB+ to BB c a negative Outlook in early may. The last investment grade rating Brazil lost in February, when Moody’s downgraded it by two notches — to Baa3 to Ba2 with a negative Outlook.

Brazil is suffering from the effects of the policy that on the second time spent the previous President Luiz inácio Lula da Silva, says Duran: “It was the worst period in his reign, but then the country could still afford to grow despite the atrociously bad management”. The social program, which was initiated by the previous President, according to the expert, “wonderful”, is 20 years from the mid 1990-ies out of poverty managed to pull 40 million people, every fifth of the Brazilian. But the results of the financial and investment policy was a failure.

Rousseff’s first term continued the economic policies of its predecessor, leaving the post of Minister of Finance Gvid to Monteg, but with the beginning of the collapse of the economy and the ratings took sharply to the right, selecting the course of hard budgetary savings. But “seated in an armchair of the Minister of Finance, “Chicago boys” (new Finance Minister Joaquim levy received his degree from the University of Chicago), Rousseff has disappointed his supporters, ” explains associate Professor University of são Paulo and the Lincoln Statue. — Reducing social benefits, raising taxes and increase the key rate to 14.25%, it has lost the support of the Labor party, but not purchased it from a conservative Congress”. 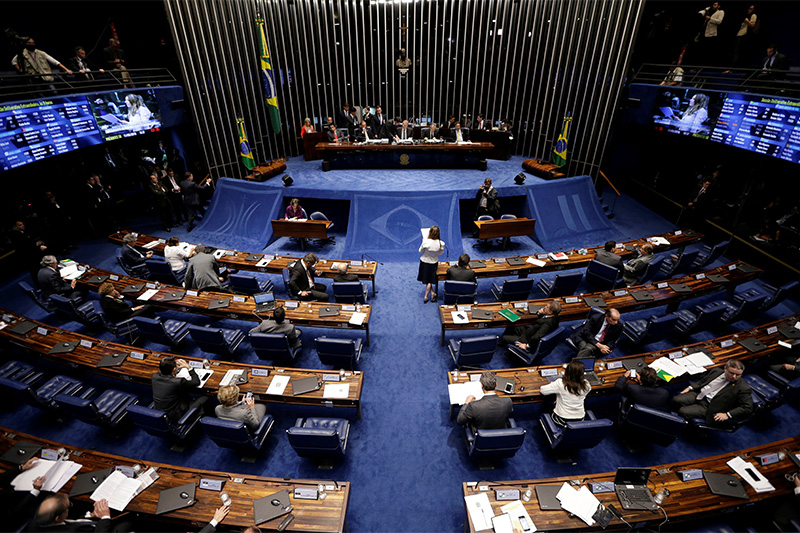 To the problems of the economy and added a Grand corruption scandal: in 2014, Brazil has instituted a whole series of criminal cases against top management of state-owned companies Petrobras and related politicians, businessmen and officials. Due to the criminal schemes related to bribery and kickbacks uncovered in the course of operation car Wash”, the company’s management, according to the investigation, received at least $3.8 billion of this money went to cover the actions of concern by government officials and parliamentarians.

In the lower house criminal charges were brought against three dozens of deputies. In April last year was arrested by the chief Treasurer of the ruling party, joão vaccari, in December — the speaker of the Senate, the same party Rousseff, Delcidio Amaral.

Itself to Rousseff 2003-2010 Chairman of the Board of Directors of Petrobras and, according to its opponents, could not know about it accepted practices “commissions” on transactions.

At the same time was opened and a number of other abuses. For example, initiated the impeachment of Rousseff speaker of the lower house Eduardo Cunha himself was accused of receiving kickbacks amounting to $40 million Just a week ago he was removed from office by the Supreme court of the country. Former President da Silva was a defendant in the parallel case of “trafficking in influence”.

Despite all the difficulties, Rousseff for a long time fought back against attempts to deprive it of power, calling mass rallies in his support and accusing the Vice President of Camera in the conspiracy to usurp power. To start the procedure of impeachment of the opposition in the end was only in December 2015, with 34 attempts. At this point, Rousseff left and supporters of the ruling Labor party and partners “Trudoviks” for the coalition of the Party of the Brazilian democratic movement, headed by Temer.

Last chance to suspend the impeachment of Rousseff received, with the exclusion Cunha, its main enemy. Then on the freezing process of the removal of the President from office in court, petitioned the attorney General, Jose Eduardo Cardoso. He insisted that the former speaker allegedly guided by motives of political revenge and manipulated by fellow deputies, prompting them to open a process against the President. Changer Cunha, Valdir Maranhao withdrew the decision on the beginning of procedure of impeachment, but when the Senate refused to support this step, in my opinion.

Rousseff conceded a tactical defeat when the vote in the Senate was still in full swing — the Brazilian media reported that on Wednesday the President ordered to move her personal belongings from the presidential Palace to her private residence. According to Reuters, the President also met with his Ministers, urging them to leave on Thursday to resign, to leave Tamara without an effective government.

However, on the eve of the debate, Rousseff promised that he would fight for his post “with all his strength and means.” “I want to assure you, the last day of my presidency will be 31 December 2018,” she said on Tuesday.

Rousseff – the daughter of the Bulgarian Communist Peter Ruseva, who fled their homeland in 1929 due to political persecution – to engage in political activity in the late 1960-ies. After graduating from the boarding school for girls, where she spoke exclusively in French, in 1967 she joined the youth organization of the socialist party of Brazil, and then to its radical wing — “the Command of national liberation”, who advocated armed struggle against the military dictatorship by methods of “urban guerrilla warfare”. Rousseff held underground for several years. Not taking direct part in hostilities, in 1970, she, nevertheless, went to prison, where he spent the next two years. After recovering, she resumed her studies and in 1977 he graduated from the University with the diploma of bachelor on speciality “economy”.

In 1979, Rousseff helped found the Democratic labour party. In 1985, the party won the first direct elections in the capital of the state of Rio Grande do Sul — Porto Alegre, Rousseff began to work in the city administration, responsible for budget planning. After that her career took off. In 1993, Rousseff has held the post of Minister of energy of the state. Then she noticed da Silva — ten years later, after winning the 2002 presidential election, he appointed her energy Minister in 2005 as his chief of staff.

In 2010, when the second presidential term came to an end, he supported the candidacy of Rousseff. During the election campaign she was for the agrarian and political reforms, support for racial quotas, freedom of religion and homosexual civil unions. At the same time Rousseff opposed the death penalty and the legalization of soft drugs. In 2010, she won the second round, and throughout the term enjoyed a high popular support, which allowed it to be reelected in 2014.