The Chairman of the accounts chamber Tatyana Golikova, speaking in the state Duma, said that because of the “reckless optimization” of medical services in some rural regions there is a high mortality, life expectancy lags far behind the national average — as a result of the overall positive dynamics may deteriorate. As an example, Golikova has led the Pskov region: “If the death rate in Russia in 2015 — 13.1 per 1000 of the population, say, in rural areas of the Pskov region, the figure is 22.6 cases per 1000 population”. “The average life expectancy, which we reached in Russia as a whole, we have increased 71.4 years, while in rural settlements the same Pskov region, the figure is barely more than 66 years,” he said, answering the question of Deputy Nikolay Gerasimenko.

Gerasimenko said that the MPs receives numerous complaints from citizens about the declining availability and quality of medical care due to the reduction of beds or the closure of medical institutions. He cited statistics of the health Ministry, according to which in 2015 was reduced by more than 40 thousand beds.

“Mindless optimization, which is currently in a significant number of subjects leads to very undesirable consequences”, he said and cited the “depressing statistics”, which the chamber received from the regions by the end of 2015. According to Golikova, from 130 thousand rural settlements on the territory of Russia only 45 thousand have some form of medical care, and the rest — i.e. the majority — they simply do not have. “And there are glaring instances when the death rate as a result of such unavailability of medical care, significantly exceeds those indicators which on average has developed in Russia”, — said the head of the accounting chamber. The press service of the Ministry of health was unable to immediately comment on the data Golikova.

If Russia’s average life expectancy is increasing “at the expense of successful actors”, in rural localities and regions in which there are shortcomings with balanced budgets, there are challenges and risks for demographics, Golikova said. “If this is a fragile balance that now exists is broken, then the situation will deteriorate,” she warned. 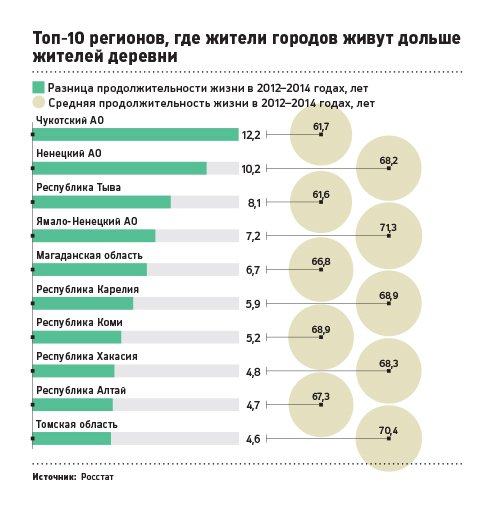 In 2012, President Vladimir Putin, by signing the so-called “may decrees”, instructed to bring the rate of life expectancy in Russia to 74 years by 2018. By the end of 2015 the rate was 71.4 years (Rosstat data), up from 69.8 years in 2011, when life expectancy was approximately at the 1990 level. But the economic development Ministry predicts that the life expectancy reaches 74 years by 2018. The Ministry in the medium variant population projection (prepared on the basis of forecasts of Rosstat, adjusted for the estimated population at the beginning of 2016) expects life expectancy in 2018 will amount to just 72.2 years. The chamber also warns of failure of the indicator. As reported by the press service of the accounting chamber, the risks of not achieving the targets for life expectancy persist, given that in 2015, in accordance with all regulatory documents, an indicator had to be already 72,02 year, and in fact, according to Rosstat, was equal 71,39.

Russia has reached a historic high in terms of life expectancy in the country, Putin said may 16 at a meeting of the Commission on monitoring the targets of socio-economic development, however, acknowledged that “qualified doctors, especially specialists, paramedics in rural areas, often lacking; particularly acute problem is felt in small towns, remote areas”.

According to Rosstat, in Russia as a whole the gap in life expectancy of urban and rural population in recent years has declined significantly since 2011, on average by 8.2% per year. However, in 2014 it was still made up of 1.95 years. In some regions the difference is much more significant. For example, in the Chukotka Autonomous district in 2014, the gap was 11.2 years, and the average in 2012-2014 was 12.2. The average for the Nenets Autonomous district for the same period was 10.2 years for the Republic of Tyva and 8.1. There are, however, regions in which rural citizens are living longer on average than in the city. Among them — Chechnya, Leningrad and Moscow region: there in 2012-14 years the rural population in average lived on 4.4; 2.8 and 2.1 years longer.

Life expectancy in rural areas was always lower, this gap persists, the Director of the Institute for social analysis and forecasting Ranhigs Tatiana Maleva. “In rural areas do have access to quality medicine is much lower — it’s true. But at the same time the rural population are more prone to alcoholism, and medicine here at anything — it is a voluntary choice and the problem of development of social relations in the countryside. Here the health system can not do anything, when people are attached to family alcoholism,” says Maleva. Professor NRU HSE Andrey Korotayev agree that the problem largely lies in alcohol: “in the countryside have hurt the actual lowering of the excise tax on vodka and reduced the minimum price”. “We forecast the demographic forecast is not very good, because now lowering the price of vodka has hit rural areas. But there is a risk that with the exit of Russia from crisis will begin to beat and the city, and again the sad story of 1999-2003, when economic growth has been a sharp increase in mortality,” says Korotaev.

To increase the availability of medical care in rural areas in 2012 were put lump sum payments to medical workers under the program “Zemsky doctor”, and for 2012-2014 managed to involve in the initiative more than 15 thousand young specialists, experts noted the HSE in a report prepared for the April conference of the University. However, the effect appeared to be fading, they write: if in 2012 the participants were 7.7 thousand, in 2014 — already 3,3 thousand “it is Obvious that the one-time payment for the resettlement of the young specialist cannot compensate for the low level of the current remuneration for work in difficult conditions in rural areas”, — stressed the authors of the report. The Minister of health Veronika Skvortsova at the meeting on 16 may said that through the program “Zemsky doctor” in the village has managed to attract more than 19 thousand doctors. In comparison with 2012 the number of doctors working in rural areas, increased by 5.5 million (11%) reported it to Putin.