Sunday across the country held nationwide primaries “United Russia”, which determine candidates with whom the party will go on autumn elections of the state Duma. In recent months everyone (except members of other parties, convicted and owners of foreign accounts) apply to participate in the primary election and debated with each other. They were about 3 thousand people.

For the first time in the history of the “United Russia” to take part in the vote in these party elections are all Russian citizens and not just party members. To do this, United Russia has leased 20% of the total number existing in Russia polling stations.

But in other regions the turnout was much lower. In the Kamchatka region by noon of the counting Commission, according to “RIA Novosti”, reported a turnout of only 8%. For 13 hours in Tver and Nizhny Novgorod regions, the turnout, according to the website of “United Russia” was only 3.5% and 5%, respectively.

In the Khabarovsk territory after the polls closed, the turnout was 6%, according to the official website of the party.

In Moscow was recorded one of the lowest appearances — according to TASS, in the first hours of voting on the sites came only 50 thousand people (less than 1%). According to the cochairman of the movement “Golos” Gregory Melkonyants, just in the capital as of 1 January registered 7.3 million voters.

The lack of buzz on sites noticed and correspondent , visited in the Odintsovo district of the Moscow region. Plots in Barvikha were almost empty. Few visitors could hardly answer the question of what is primary. “Specifically, I won’t tell you,” said a middle-aged woman, came out from the station in a school №5. About voting, she learned from the management of the kindergarten, which employs the staff said: “be sure to come to vote”. As of 17:00 the voter turnout in this municipal district was 7.1%, the local branch of the party.

By 16 o’clock, according to the website of the party, all took part in the primaries 6.2 million citizens.

During the regular elections in Moscow and Moscow oblast are regularly among the regions with the lowest turnout — vote out there a little more than half of the voters. The highest rates are traditionally in the Chechen Republic, the turnout here is 100%.

In General, in normal elections the turnout was several times higher. So, by mid-day Sunday in Nizhny Novgorod region voted in the primaries 5% of voters, in regional elections in 2014, by this time, turnout reached 30%. In Khabarovsk Krai polling sites were closed Sunday with a preliminary turnout of 6%, during the elections to the state Duma in 2011 in the region have voted 53% of the electorate. 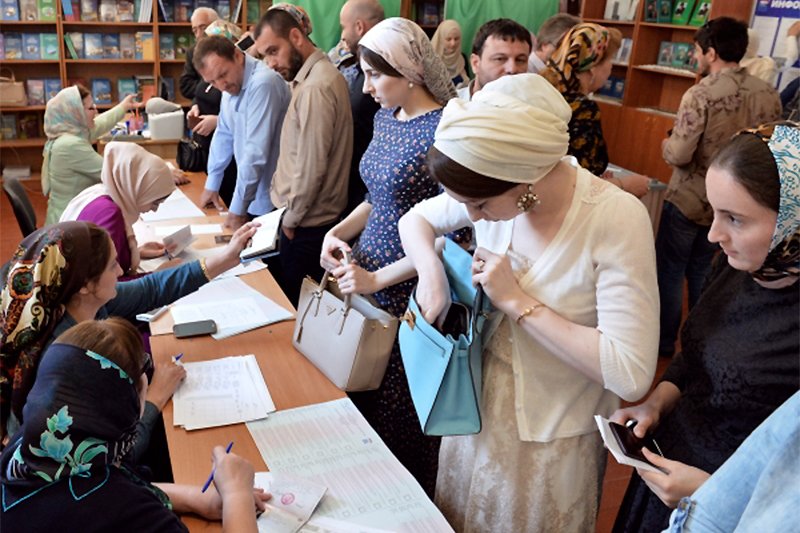 Violations in the primaries

The largest number of complaints and reports (50) about violations received in Primorye, where two dozen people broke into a polling station in the village of Plastun. They threatened to burn the ballot box and all the premises together with people, demanding to rig the results in favor of one candidate. Place together with the people and the ballot box was evacuated by the police.

In the “United Russia” in Moscow confirmed the fact of bribing voters before the primaries in favor of the candidate-United Russia Igor Ibysheva in the suburban town of Odintsovo. According to the source in the leadership of the local branch of the party, the issue of bribery of voters being left out of discussions of the organizing Committee for conducting the primaries. Ibysheva “the remark was made that this kind of agitation was not applied.”

And in Lyubertsy district correspondent witnessed organized mass “carousel”: the manipulation of multiple polling stations visited by the same group of people. On a few cars and buses students and state employees three times I visited the same sites, to to vote to the right candidates. Showing conditional sign (sticker) in the passport, was able to vote there and the reporter , but is registered in another region.

Informed about what strangers on the street offer for 200 rubles. to vote for that candidate, said several participants and organizers of the vote. Ibishev himself when he heard the reporter’s question about the bribery of voters, put down the phone.

On Sakhalin observer Anna Petrova stated that she was beaten after she tried to commit compulsory voting at the “Fisherman”. According to the Agency Sakhalin.info the woman tried to take a picture of the factory brought the ballot box when the procedure of the primaries does not involve on-site voting.

In Perm region there have been claims of illegal campaigning: the lotteries in support of some candidates.

Co-chair of the movement “Golos” Gregory Melkonyants said that since, the primaries are party events, their organization Sunday only tracks violations associated with the use of administrative resources — for example, cases of forced voting or illegal campaigning by officials. According to card violations as of 16 hours on it recorded 56 complaints, 35 of which came from Moscow.

According to Melkonyants, questions arise to the technical support of the event. “Schools, computers, polling booths — whether to use them on the same terms to other parties if they want to hold primaries? If not, then it is also necessary to consider the violation”, — said Melkonyants.