How is ensured the turnout and the vote for the “right” candidates in the primaries “United Russia”, the reporter saw in the Lyuberetskiy district of the Moscow region. At the end of the week, some officers in the local budget enterprises has announced that they will have Sunday to participate in the primaries of the party in power and to do this a few times to travel the same polling stations, said a local official. “I selected mostly the elderly, dependent, apparently, that nobody could refuse” — he said on condition of anonymity.

On the same day in the passport of the future participants of the primaries on the inner side of the cover stuck colored stickers — markings for election officials. Exactly the same sticker, but bought at a local store, his passport stuck to the reporter .

On the afternoon of 22 may the staff of the enterprise gathered at the place of work, where there was a briefing, says his party. According to him, he did not last long. The boss ordered him to travel three polling stations three times, for it promised the time off, and bonus, he recounts. Called the names of those who will need to vote. The names were many — for the elections to the state Duma on the list (voting, rating, it was possible to note five people) and in single-mandate constituency, as well as elections to the Moscow region Duma. Among the recommended to the vote on the list was the acting Deputy of the state Duma Irina Rodnina, and the future of single-seat districts had to choose one Senator Lydia Antonov. Posters with her face, the reporter saw several times, when traveling in the area.

“Carousel” on the machines

After a briefing about a dozen employees took to the streets and, according to the correspondent , sat in private cars — several people in each. The buses they are not isolated.

Informed sources close to the leadership of the different regions, talked about the plans of the authorities to carry state employees in buses to increase turnout (it was planned at 10%). However, after reports appeared in the media, the Secretary of the General Council of the party Sergei Neverov has made it clear that he considers this practice unacceptable. “No need to organize any bussing on the bus! For us the main thing — not the number of participants, and the trust of citizens. People wishing to vote will find a way myself to get to the site. I warn you that if you recorded to bring up, the results will be cancelled”, — he declared in mid-may at the meeting of the Federal organizing Committee.

Car employees went to different sites. The one that went to the correspondent , stopped at the nearest school. In the voting room was not more than five voters, but drove people immediately formed a small queue. The friendly staff of the commissions took the passports, made them data in the first computer, then a pen in a special registration sheet, and then gave the ballots.

By voting, the participants of this procedure, went to the next site. Before their arrival there were only a few voters, but from the speakers was heard the song of Bulat Okujava “We need one victory”. Local staff of the Commission without question again in the same pattern came gave the ballot. Although, as has been officially stated in the “United Russia”, each voter can only vote at the place of residence — that is, only one polling station. 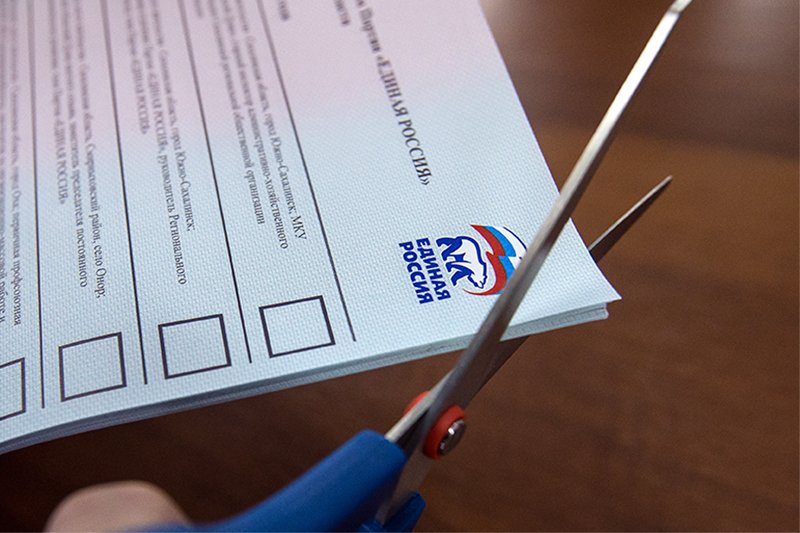 The third polling station was the local art Palace, it was also virtually empty. Here the music played from the speakers, and from mobile phone of one of the members of the Commission. The organizers again without problems have issued bulletins to those people who have just voted in other areas.

Here, the reporter tried myself to participate in the primaries. An employee of the Commission, quickly looking around the inside of the passport cover and found the sticker, nodded and brought your passport details into the computer. Then she asked me to come to his colleague, who recorded the passport data in the sheet and offered to put six signatures in different graphs. The fact that the reporter spelled out in the North district of Moscow, she did not pay any attention.

“But where we really” she replied to the question why there is no speaker and you have to do is play music from the phone, and gave all ballots, including those relating to the elections to the Moscow regional Duma.

After the first round of the state employees again went on those sites where they have already voted. They acted according to the former scheme, but with a caveat: it was impossible to approach the same election officials that made them in their registration sheets for the first time. They were asked to approach others, and those recorded passport details and asked to put signatures in other lists.

When the reporter was leaving the second time one of the sites, he found next to the building bus. It was still decorated for the holiday on May 9, on it was inscribed “service”. In this vehicle sat a dozen young people, to students. The bus went on a familiar route. Young people, leaving him, went to the site simultaneously, and groups, thus, the room for voting for a long time was filled with voters. Others waited on the street.

Bus driver at this time traveled a few hundred meters from the station and stood aside, although a number had a large and empty Parking lot. The correspondent told him that he already did a few laps, and asked how many that left to go. “Now wait, guys still need to eat. And like only one round left. But teams,” — said the driver.

The source in the leadership of “United Russia” said that the party will carefully examine all officially admitted to the complaints of violations. According to him, in the case of “carousel” United Russia will respond to the complaint, backed up by videos. This interviewee addressed the statement Neverova, which he did, commenting on violations in Primorye. If the facts are confirmed, then the results of the voting at polling stations will cancel, assured the Secretary of the General Council of the party.