On Friday, may 27, was held the annual General meeting of shareholders of the savings Bank. The holders of shares of the largest Bank in the country approved its annual report for 2015, approved the amount of dividends elected the new Supervisory Council and communicated to the management Board. At the head office of Sberbank already at 10 a.m., brought together representatives of the Supervisory Board, including the head of the Center for strategic development Alexey Kudrin, Chairman of the Central Bank Sergey Shvetsov. Come and minority shareholder Alexei Navalny. The meeting lasted about five hours.

“We have lived another very difficult year — the second year of the economic crisis in the country, and in 2015 it has become clear that the trends which were formed in the last decade, began to break,” said Gref, reinforcing his words with visuals theses: the largest migration crisis in Europe since the Second world war, production returned from China to the United States, the global economic landscape is changing, creating a new reality.

According to the head of Sberbank, this reality formed by five main trends: the world is becoming digital, disruptive technologies supplant traditional manufacturing, there is a rise of geopolitical tensions, slowing growth in emerging markets and lower prices for raw materials and energy. On the slides flashed examples: capitalization of Deutsche Bank, global Bank with a 150-year history, in 2015 was two times lower than the capitalization of PayPal, established in 1998. Assets managed by computers without human assistance, in 2015 amounted to $20 billion and, according to Sberbank, had reached $450 billion in 2020. 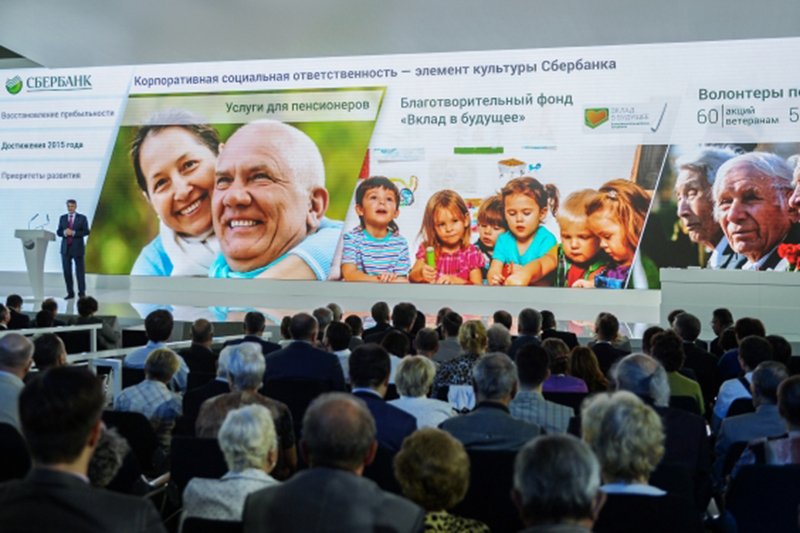 President, Chairman of the Board of Sberbank German Gref, speaking at the annual General meeting of shareholders of Sberbank

The outflow of capital from developing countries in 2015 amounted to $735 billion Fell raw material prices. It is not a crisis, but a new reality, repeating Gref, and for Russia, it is still a great challenge. Russia’s GDP last year fell by 3.7%, real incomes — by 4.3%, real wages — by 9.3%, inflation was 12.9%, Gref has reminded. In two years the market has left every fourth Bank, the Bank bailout was spent 1 trillion, recapitalization of banks had cost the state 1.8 trillion rubles., and DIA have completely exhausted their funds, he added.

Profit to the delight of the shareholders

Sberbank in 2015 was not easy, but he managed to achieve very good results, Gref believes. Last year, the country’s biggest Bank earned 223 billion rubles of net profit, which is almost 70 billion rubles less than in 2014.

The hardest was the first quarter in which profit was 2.5 times lower than in the same period of 2014, said Gref. “We entered the year with a very high proportion of funds from the Central Bank, the share of funds from the controller in the composition of our liabilities was around 15%. When in December 2014, the Central Bank raised its key interest rate, the cost of these funds rose sharply, and in the course of the year, knowing that the market situation is turbulent and the trend with a high rate of the Central Bank will be lasting, we have set the goal as quickly as possible to return the funds of the Central Bank”, — he explained. During the year the savings Bank has returned the regulator to about 3 trillion rubles. 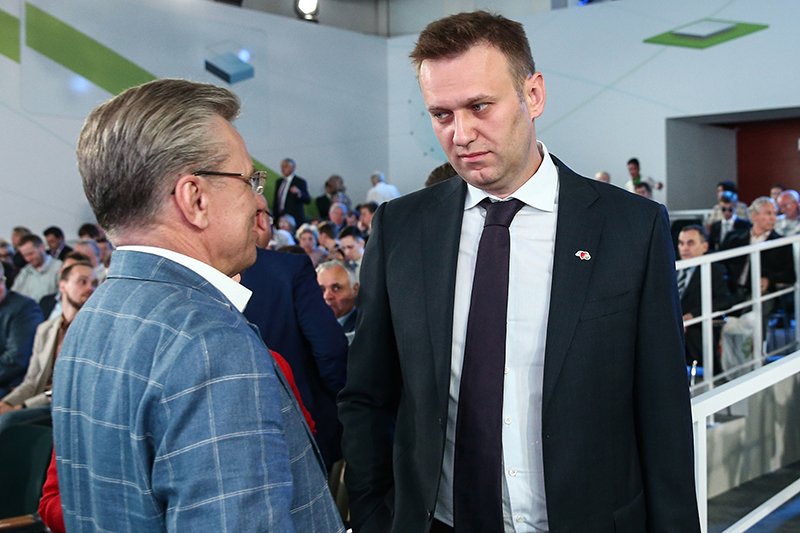 This helped the Bank to reverse the trend and reach targets for profit, said the President of Sberbank: in the fourth quarter of 2015, the savings income was one and a half times more than in the same period of 2014.

As a result, in 2015, the shareholders of the savings Bank received a very good income, I’m sure Gref. “The income on ordinary shares amounted to 86%, preferred 105%, in 2016 we see a continuation of the trend, shares of our Bank updating the historical highs,” he explained. “I think the current situation with sanctions, the difficult macroeconomic situation, which is, it is a very good indicator”, — he concluded.

After payment of the minimum dividend for 2014, which the management of the Bank, explained the need of capital support during the crisis in the economy and the devaluation of the ruble, the savings Bank proposed to the shareholders to return to the level of dividends in the amount of 20% of net profit under IFRS. The shareholders did not object: in the end, the Bank will direct on dividends 44 bln, or RUB of 1.97 per share. This is 4.4 times higher dividends for 2014 (RUB 10.2 billion, or 45 kopecks per share).

The savings Bank against cash

Having finished the story of the financial results of Sberbank, Gref went on to change that, from his point of view, will help the Bank to remain the leader. “Someone who does not think about distant difficulties inevitably close trouble,” he quoted Confucius.

One of the main priorities of Sberbank remain technology. “We began to introduce elements of predictive Analytics, artificial intelligence and shorten the time needed to bring the product to market, and this is core competitiveness of the company”, — said Gref. According to him, through this approach and investment in digital technology business of the savings Bank began to sharply accelerate. “We are gradually becoming a digital company”, — said the head of Sberbank.

The number of active clients who hold cards of the savings Bank, reached a record 120 million, across the country a 86 thousand ATMs is the largest ATM network in the world, the app “Sberbank Online” are 29 million people, the number of users is growing at 600-800 thousand per month, he says.

“Our most important task is to increase the penetration of card usage in sectors which are still dominated by cash payments,” — said Gref. The savings Bank has established the possibility of buying a car with the card, having signed partnership agreements with 8 of the 10 leaders of the Russian car market, whereas previously all transactions were made using cash. Last year the Bank also began work on the installation of terminals in the Moscow metro stations. Now pay by card for the ticket at all the metro stations in Novosibirsk and at five stations in Moscow, by the end of June, the terminals will be installed at 66 metro stations, said Gref.

To demonstrate the advantages of the online services of the Bank and its role in lending to the agricultural sector (last year the Sberbank has issued a third of all loans to farmers) Gref helped a client from Lipetsk region — the owner of the farm Andrey Bukarev. In a speech on the stage of the progressive farmer, your farm connected to the most remote channels of service, in the hall let the smell of freshly cut grass.

“Familiarity with Sberbank we started with the payroll project. We are all workers provided with Bank cards, despite the fact that the nearest city we have at least 20 miles, people get money at the ATM, we hooked up a collection” — began Bukarev. He also put in all their retail outlets acquiring, “that money is not settled in the pockets of sellers.” “Pity the Finance Minister didn’t hear, he would be glad of that now in rural areas can pay off the card”, — said Gref. 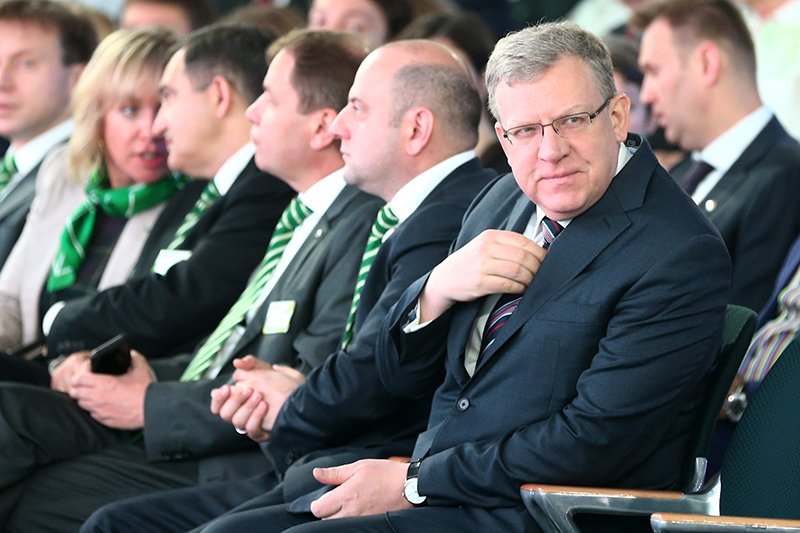 The farmer has also established “Smartcase”, a joint service of the savings Bank and the FTS, which allows you to send online receipts to the tax office, and decided to take a Bank loan. “We were a little stretch, all the relatives raised on the ears, but, as we have been a family owned business that was easy”. In the end Bokarevu managed to get the money to expand production.

As a gift to the beloved head of the Bank, the farmer brought the head cheese, but Gref insisted on the fact that for the cheese to pay. Bukarev put Gref account for 6 thousand RUB through “Sberbank Online”, and the President of the largest Bank paid for the gift. A check on the sold cheese at once appeared in the “Smartcase”. “Happy is not only the Minister of Finance, but the tax service”, — summed Gref.

What do the shareholders

During the meeting proposals management of the Bank according to tradition was expressed by the minority shareholders, saying sitting on the podium Gref and the Chairman of the Supervisory Board Sergey Ignatiev about the issues that concern them the most.

The first of them decided to share their own vision of the world economy and Russia’s place in it. Among other things, he suggested that Gref to insure loans to oil companies. On the world oil market inflated a huge bubble, then there is a very high probability that Japan will soon throw oil ballast” by going to electric vehicles, and it will be followed by the whole world, he explained. In addition, the Investigating Committee proved the illegality of the loans for shares “Yuganskneftegaz” on stage — the other bidders are, therefore, critically important “to phase out all loans to participants of the auctions,” he added.

Another shareholder suggested the Gref to take over the development of the private equity market. Need a handy tool that will allow private investors with small capital is easy to acquire the shares and manage the portfolios, the savings Bank may actually create a new niche, he explained, proposing “a code word for this project — Inwestycyjna”.

The greatest excitement in the hall caused a shareholder who decided to use the opportunity to speak from the stage to read their own poems — “War” (because may is a victory) and “Murder”. Despite suggestions from the audience to turn off the microphone and Ignatieff’s persistent attempts to interrupt the reading, he decisively moved to the third poem. “Alexander Pushkin looked to the future, Vladimir Vladimirovich Mayakovsky, I also looked into the future and wrote a poem called “Cult of personality” — he said, and only after he shared with the audience this creation, he left the stage.

The approval of the audience received a shareholder, who proposed to include the printing press. “It is sometimes said that the inclusion of this machine means to include emissions, but economists know that in one case, inflation may be higher if the machine is included in the other — may be reduced, if the money provided with the goods,” said a minority shareholder.