The attack in Aktobe

Sunday in Aktobe (formerly Aktyubinsk) was the largest in the history of Kazakhstan a terrorist attack. According to reports of the interior Ministry, a group of armed men, the exact number is unknown, attacked two gun shop “Pallada” and “Panther” and a part 6655 of the National guard, the gate of which they struck with a Shuttle bus, then opened fire on the soldiers.

The Kazakh authorities have reported the deaths of three civil, three police officers and 12 attackers. The total death toll at 18 people. The search for the attackers continues. According to the interior Ministry, six or seven people are wanted.

The aim of the attacks on shops and military units were taking arms, said the Minister of internal Affairs kalmukhanbet Kasymov. It qualifies the action as a terrorist attack. Interior Ministry spokesman Almas Sadulaev on Sunday said that the attackers can be committed to radical non-traditional trends. 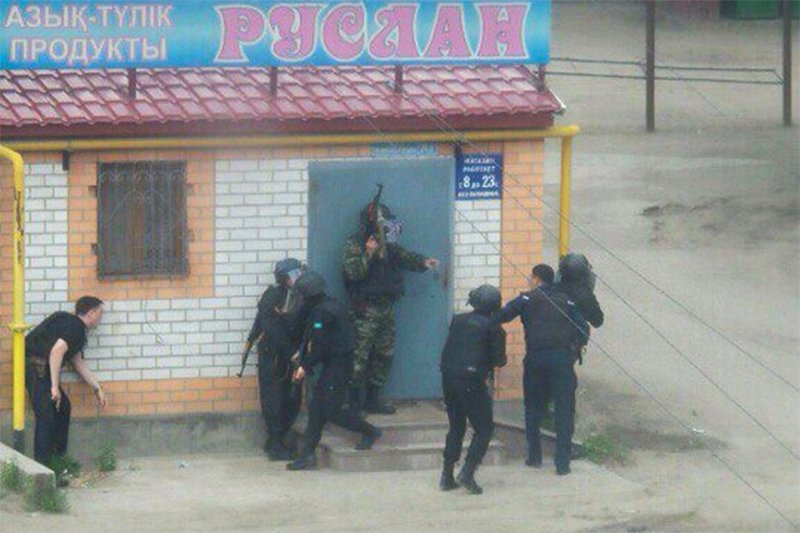 In the afternoon on Monday, radio Liberty has published evidence that so-called liberation Army of Kazakhstan in a statement to the international media, took responsibility for the events in Aktobe. The appeal, in particular, says that it was “the first battle of the supporters of democratic development of Kazakhstan against Nazarbayev dictatorship clique”. A confirmation message of the radio materials not provided. Information about this organization on the Internet is not detected.

Not the first terrorist attack

Aktobe — the fifth largest city of Kazakhstan and the largest city in Western Kazakhstan, near the border with Russia. According to official figures, live in Aktobe city 397 thousand. Kazakhs 76%, Russian 16%.

In Aktobe has happened terrorist acts. In 2011 in the city for the first time in the country there was a terrorist attack involving a suicide bomber. 25-year-old resident of Aktobe Rakhimzhan Makhatov committed the terrorist act “in order to evade liability for criminal offenses as part of an organized criminal group”, then reported the result. In the same year, terrorist incidents occurred in the cities of Atyrau and Taraz in other regions of the country.

Islamists in Kazakhstan is extremely small, mass radical movements are almost there, the Director of the Institute of regional problems Dmitry Zhuravlev. He suggests that the attackers could pursue the solution of a “regional and local problems.” 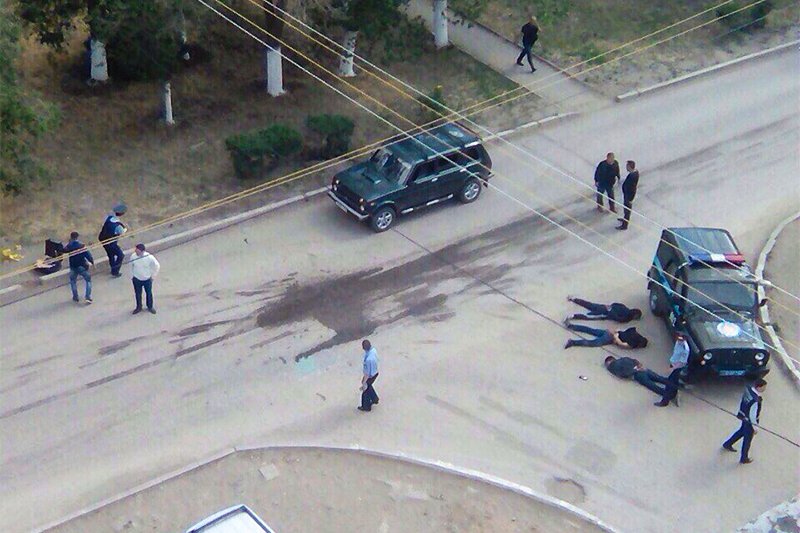 The attacks were the result of internal causes, they are not stand external forces, said “RIA Novosti” the expert of Institute of the CIS Andrey Grozin. In his opinion, the possibility of involvement in a criminal incident criminal elements are excluded due to “too high” level of coordination.

At the same time, the authorities report on how to prevent riots in other cities, which began in April in connection with land reform.

On Monday, the representative of the national security Committee of Kazakhstan (KNB) Ruslan Karasev announced that well-known in the Republic businessman, Director of LLP “SHYMKENTPIVO” Tokhtar Tuleshov allegedly took steps for the violent seizure of power by funding protests against land reform. According to Karasev, were arrested and alleged accomplices Tuleshova: former first Deputy Prosecutor General of Kazakhstan Ilyas he touched upon the use and the former head of the Department of internal Affairs of South-Kazakhstan region the major General Hibratulla the Doskaliyev, another senior police officer and two commanders of military units.

Tuleshov was arrested on 30 January and 24 April in Atyrau was the first unauthorized mass rally against government plans to allow foreigners to lease land for agricultural purposes.

After Atyrau rallies were held in several cities in the West, the South and centre of the country — Atyrau, Astana, Almaty, Uralsk, Kyzylorda. The alleged participants of another protest planned for may 21, were arrested.

May 13 broadcast of “Main news” “channel one Russia (Eurasia)” has been shown a video in which allegedly exposes customers “unlawful gatherings” on the land issue. In the story it was said that unknown persons had paid the organizers of “illegal Assembly” for each person from $50 to $150. In late may, the Prosecutor General’s office of Kazakhstan has issued a statement saying that the country was allegedly preparing for mass riots with the participation of some provocateurs. And on 3 June in Atyrau were arrested two months two civic activists — MAKS bokayev and Talgat Ayan. 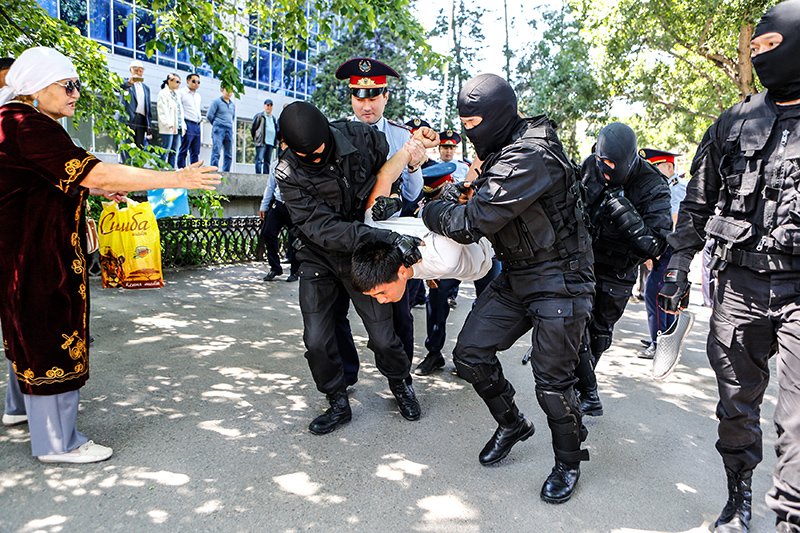 Riot policemen detain a demonstrator during protests in Alma-ATA, March 2016

For “land disturbances” name Tuleshova in connection with them was not called. The analyst Arkady Dubnov believes that the message about his involvement in him is a hasty attempt by the authorities to reassure the population and to show him the alleged instigator.

The events in Aktobe and previously in other cities of Kazakhstan indicate that the government does not fully control the situation and the absolute stability in the country, says the expert of the Center Carnegie Alexey Malashenko.

“The land issue” is just a pretext to Express dissatisfaction with the economic situation in the country, some experts believe. “The government of Kazakhstan rashly relied on the propaganda of their own success, claiming that they are the first in the former Soviet Union, they have much better things in the economy, than in Russia”, — said the Russian expert Azhdar Kurtov.

However, the country is experiencing an economic crisis. The national currency tenge in August 2015 fell by a quarter immediately after the government abolished the currency corridor by going to a free floating exchange rate and inflation targeting regime. The devaluation was a response to the fall in world prices for oil and metals account for about 80% of exports). Since that time, the tenge has depreciated by almost two times (from 188 to 335 tenge per dollar).

The national Bank of Kazakhstan reported June 1 in the report for 2015 that the totality of such factors as the weakening of the tenge, the fall in world oil prices and the weakening of currencies of countries — trade partners of Kazakhstan, led to a rise in inflation to 13.6% by the end of 2015 (maximum score in 2008), the decline in business activity, consumer demand and reduce incomes.

Not a place for protest

For a long time, the authorities denied the very possibility of terrorist acts in the country, which was positioned as the “island of stability” in Eurasia, after the first terrorist attacks were convinced that there is more crime than ideology, writes in a commentary Kazakh expert Dosym Satpayev. Parallel to this was the weakening of the legal opposition that was made room for radicals, experts say. The government has become hostage to his arrogance, I agree Dubnov.

The current protests began after the parliamentary elections, in which an absolute majority of the presidential party “Nur Otan”. In total, the Parliament passed three parties. Experts talked about the fact that neither one of them can be called opposition. Last year, a new presidential mandate in the elections received and Nazarbayev, unchallenged since the end of 1980-ies the President of independent Kazakhstan.

Chief editor of the portal “Fergana.Ru” Daniel Kislov draws attention to the fact that the attacks of this kind, as in Aktobe, occurring usually in Central Asia on the wave of peaceful protests. He recalled that the suppression of the demonstrations in the Uzbek city of Andizhan in 2005 happened after months of peaceful protests at the courthouse and led to sweeping political field, this has led an armed rebellion General Abdulhalim Nazarzoda in Tajikistan last year. Of involvement in his actions then accused the legal working Party of Islamic revival of Tajikistan, virtually destroyed after the events.

After the terrorist attacks in the Kazakhstan authorities for a long time to declare the special position to definitively ban any protest, they fear, implies Kislov.