Bond yields declining since the start of the year, together with falling interest rates and lower risks in the Russian economy (data in chart). The decision of the Bank of Russia on Friday to reduce the key rate to 10.5% once again pushed them down. For example, the yield of 15-year OFZ bonds with maturity in 2027 for the day fell below the 8.6%.

Director for analysis of financial markets and macroeconomics UK “Alfa-Capital” Vladimir Bragin says that bond yields pulled away from fundamental values and already for some time, is below the rate of the Central Bank. “This suggests that the market expects a further reduction in the key rate,” he explains. Otherwise, according to Bragin, it is difficult to understand why investors buy BFL instead to place their funds on Deposit with the Central Bank.

Investor demand is heated and the low activity of issuers: according to Cbonds, in may the volume of primary placements has decreased compared to April, three times, to 108,5 billion rubles, the Volume of OFZ placement is also falling: in March the Ministry of Finance has placed at auction of the securities on the 109 billion rubles in April — RUB 100 billion, and in may only 69 billion.

The analyst of Raiffeisenbank Denis Poryvai believes that in the debt market has formed a bubble. “Causes of imbalance in the policy of the Ministry of Finance, which covers the budget deficit with funds from the Reserve Fund and not through borrowings on the domestic market,” he said.

“Large banks have access to cheap money. These resources are channeled into the financial market, which distorts the yield tools and overheats the market” — agrees the head of Department for asset management fixed income UK “Kapital” Renat Malines. 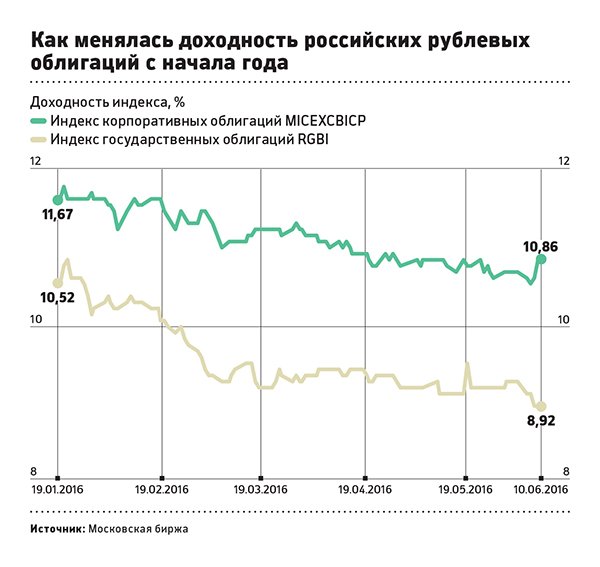 Managing Director of Arbat Capital Alexey Golubovich believes that the formation of a bubble in the debt market is connected with the policy of the Central Bank and the regulator is financed by banks through loans and REPO transactions, encouraging investment of funds in the most liquid and not too risky paper. Of them and formed a bubble,” — said the financier. In addition, according to Golubovich, the pressure to rate bonds having the inflow of speculative capital — non-residents. “They can’t get in the West, this yield that is comparable to the yields on Russian short-term bonds and earn the carry trade,” — said Golubovich.

Eurobonds at the peak value

Prices on Russian Eurobonds have reached the level of the autumn of 2013 due to high demand from investors. Now, sovereign securities are traded with a yield of 3.5–4.5% per annum, depending on maturity, which is a historical minimum.

According to the Director of the Department of debt capital markets at ROSBANK Anton Kiryukhin, the situation with Russian Eurobonds — a reflection of the global financial bubble, which is associated with excess liquidity in the market. “Interest rates on Eurobonds drop as the need to attract foreign currency resources from Russian borrowers has been severely curtailed, and investors, including Russian banks much foreign currency liquidity, which they need something to invest,” he notes.

The volume of Eurobond market continues to shrink. In may, according to Cbonds, in the appeal were Eurobonds totaling $186 billion versus $199 billion a year earlier. Renat Malin said that the shrinking market is due to the repayment of previously issued bonds, so that companies seek to reduce their costs by buying Eurobonds from the market. In “URALSIB Kepital” calculated that in 2014 the company bought from the market of Eurobonds on $1.58 billion in 2015, this figure amounted to $6,98 billion this year left the market Eurobonds for $2.1 billion In particular, in early June, your paper was bought by Evraz and NLMK.

The volume of new placings of Eurobonds in the market is also significantly reduced. According to “URALSIB capital”, in 2013 Russian companies and banks has placed in the international markets of Eurobonds in the amount of $52.7 billion, and in 2014 — $10.5 billion, in 2015 — only $3.3 billion this year placements already more — about $4 billion in may after more than 2.5 year break, the Ministry of Finance sold the sovereign Eurobonds for $1.75 billion. 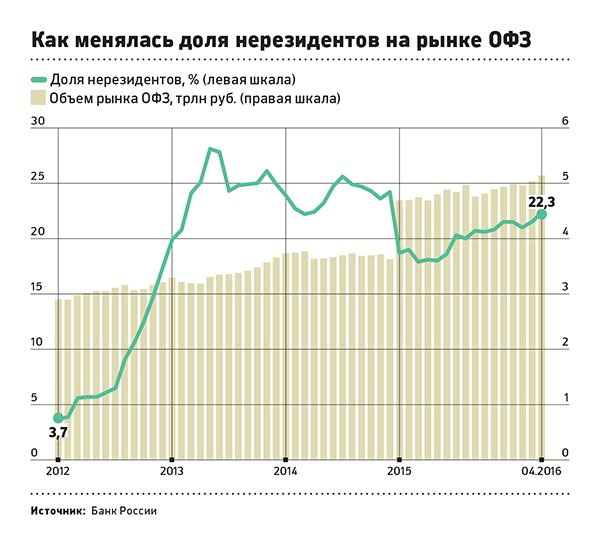 “On the foreign market, where there is a shortage of papers and with increased demand, rising prices for bonds, the situation is similar to bubble”, — says Renat Malines. According to him, the situation with external debt is a reflection of the recession in the Russian economy. “Companies are cutting costs, there is no investment,” he says.

Oil as a risk factor

The main threat to the debt market — a sharp drop in oil prices. In this case, investors will begin to sell bonds, and the released funds will be directed on the currency market. This scenario describes Denis Poryvai. Agree with him and Alexei Golubovich, according to which the most significant are the implications for banks, which is due to the fall in bond prices may decrease liquidity. “Also can fall sharply, the ruble, affected both the population and the real sector, as it was in 2009, and in 2014-2015,” — said the financier.

Economist at BNP Paribas in Eastern Europe Michal Dybula believes that the decline in oil prices and the fed rate hike could lead to higher yields of Eurobonds and the ruble weakening. In this case, companies increase the cost of servicing current debt, complicating access to new borrowing. “Investors will suffer losses, some of them may be forced to sell assets at a loss. Russia’s economy will fall again”, he added.

Russia can till the end of 2016 to issue more Eurobonds for $1.25 billion. this was in may, told Bloomberg Director of the Department of state debt and state financial assets of the Ministry of Finance Konstantin vyshkovsky.

“We came to confirm our presence in the market issuing harmful long absence — and to probe investor sentiment and General understanding of our opportunities,” he said, noting that the balance of the $1.25 billion could potentially be available before the end of the year.”

The vyshkovsky added that “financial need” to sell securities was not.

On 24 may, the Ministry of Finance completed the placement of Eurobonds, the amount of securities sold amounted to $1.75 billion. the Only placement was organized by VTB Capital, the deal passed through the national settlement Depository. The budget for this year laid external borrowing by $3 billion.

Finance Minister Anton Siluanov said that the demand when placing two times oversubscribed, and the volume of the order book amounted to about $7 billion, market Participants have suggested in the interview with “Vedomosti” that the demand could be “exaggerated” as companies have applied for larger amounts than they planned to buy.

According to senior portfolio Manager GHP Group Fedor Bizikov if oil falls to $40, we can expect a correction in the debt market. “However, given the scarcity of Russian Eurobonds on the market, a strong it will not” — said the Manager. According to estimates of the chief economist for Russia and CIS “Renaissance Capital” Oleg Kuzmin, yield of bonds in the case of correction in the oil market could grow by 2 p. p.

In addition, according to an analyst “Veles the Capital” Ivan Manaenko, in the case of lower oil prices on the debt market will leave the speculators. “Foreign infusion — only speculative capital, come quick, powerful stream and also easy going. So in the context of possible threats of the debt market, the sharp drop in oil prices, or, say, any, even verbal intervention on the Russian currency market can significantly affect the prices,” he said.

According to the Bank, the share of OFZs belonging to non-residents in March 2016 increased by 0.8 percentage points to 22,3%, or 1.14 trillion rubles Is the maximum value since the beginning of 2015, and only 5.8 p. p. less the absolute maximum, which was recorded on may 1, 2013, said the regulator.

However, as suggested by Anton Kiryukhin, if the Central Bank will continue to lower the rate, the situation in the debt market gradually stabiliziruemost, as it may stimulate credit growth and the increase in corporate bond issuance. “Excess liquidity in the banking system will decrease, and the market stabiliziruemost”, — said the banker. According to the forecasts of ROSBANK, the volume of placements of ruble bonds may exceed 2 trillion rubles, which is more than the peak of 2013. While rates of return on corporate bonds falls below 10% per annum.

“Unfortunately, the reduction in the rate of the Central Bank does not solve the problem of low economic activity because even at low rates, the company will no longer occupy. Just because the money have nowhere to invest” — says Poryvai.