The principles of humanity

Ukrainian plane flew Gennady Afanasyev and Yury Soloshenko on the morning of 14 June. According to the Agency UNN, day of the An-26 landed at Moscow’s Vnukovo airport and took Ukrainian citizens. Soon after President Petro Poroshenko wrote in his Twitter that Soloshenko and Afanasiev returned to Ukraine.

Gennady Afanasyev was sentenced together with Director Oleg Sentsov and civic activist Oleksandr Kolchenko in 2015 in the case of preparing terrorist attacks in Simferopol. Yuri Soloshenko in Russia was convicted of espionage in favor of Ukraine. According to the FSB, he was trying to buy parts for anti-aircraft missile complex s-300. Both were pardoned on June 14 the President of Russia Vladimir Putin. The pardon took place “in accordance with the principles of humanity”, is told in published on the website of the Kremlin the decree. As reported “Interfax” citing an unnamed source, Soloshenko found Oncology and Afanasyev — a skin disease.

They have written a petition for pardon to the Russian President, told the may 30 Afanasyeva lawyer Alexander Popkov. Previously with the request for transfer addressed to the Ukrainian Ministry of justice. After Afanasiev & Soloshenko arrived in Kiev, they met with President of Ukraine Petro Poroshenko, reported the press service. The meeting was conducted in surgical unit Centre of preventive and clinical medicine. 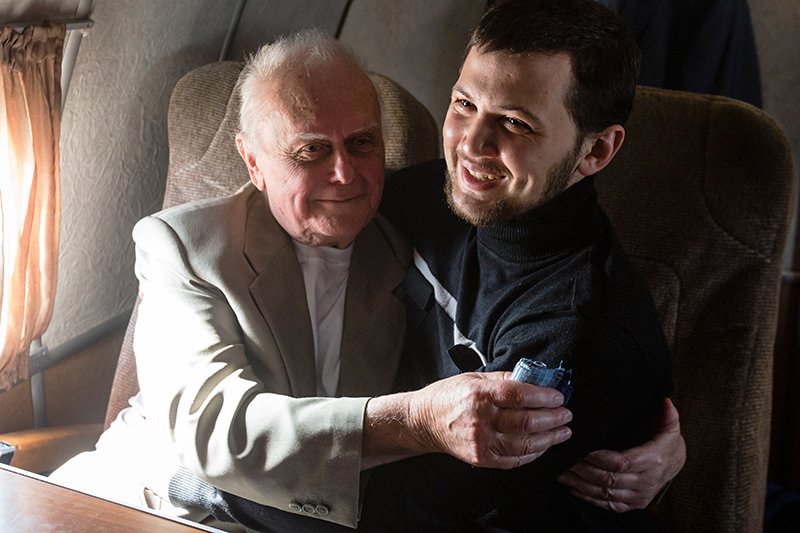 The Ukrainian side on Tuesday afternoon, gave Russia the Odessa journalists Lisinskog Elena and Vitaly Didenko, told news agencies cited the Kremlin. They were brought to Moscow on Board flight detachment “Russia”.

Director of TV company “New wave” Elena Sliwinska were arrested in 2015, on suspicion of “separatism and treason.” According to investigators, she was an activist of the movement “people’s Parliament of Bessarabia”, which defended the interests of national minorities in Odessa region. Against the chief editor of the website “information centre” Vitaly Didenko last year also opened a criminal case under article “encroachment on the territorial integrity of Ukraine.” The security Service of Ukraine claimed that he created the preconditions for the establishment of an independent state of Bessarabia. Convicted Didenko was for a different article: he was sentenced to three years of restriction of freedom once at his apartment, found the cocaine. During a search Didenko jumped out of the window of his apartment and got a few fractures.

Sliwinska was detained in the detention center in Odessa, and Didenko — in the colony in the Rovno area. Didenko was pardoned by the decree Poroshenko. Sliwinska was not convicted on 13 June she was released from custody in respect of health, reported the Ukrainian edition of “Timer”, and on Tuesday was taken to Kiev airport along with her son and husband. In Russia Sliwinska arrived with a child, about the arrival of the husband’s in Russia, not reported. 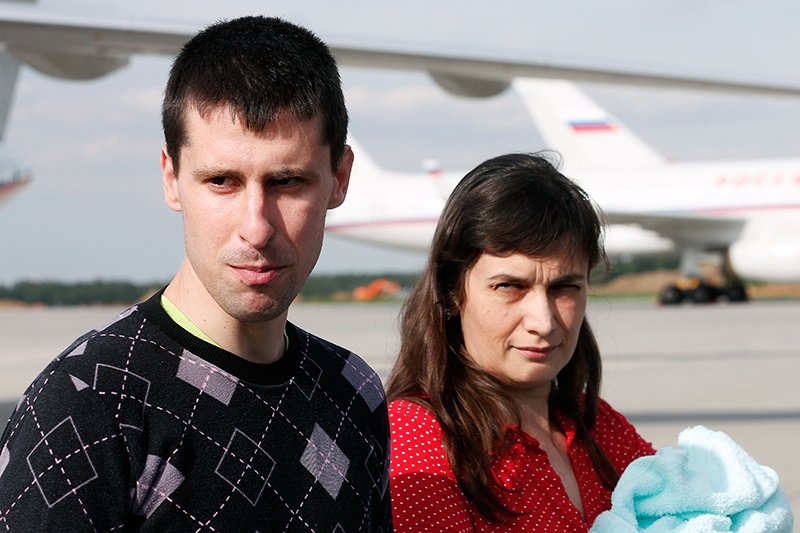 On termination of the criminal case Glescinskas not officially reported. If the person left the territory of the state, made it on the aircraft, so it was closed all the production, I’m sure the Ukrainian lawyer Valentin Rybin, previously represented the interests transferred to Russia Alexander Alexandrov in the Kiev court.

A big role in the liberation of the Odessa journalists played Russia, said Didenko and Sliwinska. “Really the fact that Russia interfered in our business and got us out is a miracle. This allowed us to be free people,” said Sliwinska at the airport Vnukovo (quoted by “Interfax”).

The journalists claimed that during his detention in a Ukrainian prison they were put under pressure to get to incriminate themselves. According to journalists, they were convicted for political reasons. “Of course, this is purely a political matter, is hunting for the so-called separatists,” said Sliwinska.

Afanasiev and Soloshenko returned to Russia following the scheme tested during the exchange of pilots Hope Savchenko in Russia was sentenced to 22 years in prison. On may 25, she was pardoned by presidential decree and returned to Ukraine. At the same time Russia was transferred to the Ukrainian court convicted the President of Russia Vladimir Yerofeyev Alexander Alexandrov, which in Kiev called “GRU soldiers.” A petition for their pardon was signed by the President of Ukraine Petro Poroshenko.

Sliwinska and Didenko are citizens of Ukraine, so Ukraine could not apply to them the procedure of transferring sentenced persons to serve their sentences at home. A pardon means that the individual is released on all four sides and he is free to decide where to go, explains the lawyer Ilya Novikov, defending Savchenko and other Ukrainians in the Russian courts. If a citizen of Ukraine decided to move to Russia, that his will continues Novikov. He recalled that Russian Igor Sutyagin in 2010, was pardoned by the first President of Russia, and then exchanged for Russian agents arrested in the United States, and now lives in the UK.

The exchange of prisoners

At the meeting with the prisoners, Poroshenko said that Ukraine will seek the release of all fellow citizens. “We will work to Kolchenko, Sentsov and those who are in occupied territory in Russia, returned home”, — said Poroshenko.

In April the Russian Ministry of justice reported that considers appeals of six citizens of Russia, who was sentenced to imprisonment in Ukraine, but want to serve his sentence at home.

Earlier, the Ukrainian edition of “Vesti” reported that Afanasyeva and Soloshenko can change to Russians Evgeny and Maxim Nefedov Sakauov, which are under the investigation of the fire at the trade unions Building in Odessa. In the Russian Ministry of justice said that Meadow and Sakauov was not appealed to Moscow with a request to start the procedure of issuing them to Russia where they continue to serve their appointed terms. According to the procedure explained in the Department, that the convicts must submit such a petition, after which the Ministry of justice to start negotiations with the Ukrainian side.

The exchange of prisoners in the subgroup with the Trilateral contact group meets in Minsk, is a Ukrainian public figure and politician, the godfather of Poroshenko, Viktor Medvedchuk.

Exactly Medvedchuk, as follows from the statements of Russian officials, mainly engaged in organization of exchange Savchenko. On 14 June, the Kremlin said that the release Pisinski, her child and Didenko became possible as a result of active actions and the mediation of the special representative of the President of Ukraine on humanitarian issues in the trilateral contact group of Viktor Medvedchuk” (quoted by “Interfax”).

The Minsk agreements involve the exchange of hostages and illegally detained persons “all for all”. The Ukrainian side uses this definition also convicted on the territory of Russia: Poroshenko, commenting on the release of Afanasyev and Soloshenko, said it became possible due to the Minsk agreements. The Russian foreign Ministry has repeatedly stated that the agreements cover only Kiev and the leadership of the unrecognized republics.

The release of Savchenko, Soloshenko and Afanasyeva is part of one operation, the MP said the bloc of Petro Poroshenko Mustafa Nayem. According to him, this exchange would not constitute grounds for lifting the sanctions against Russia.

According to Ukrainian political analyst Vadim Karasev, the new exchange is not just the fulfillment of arrangements achieved earlier, but a part of more global easing of relations, partial discharge and implementation of the Minsk agreements. He drew attention to the fact that back home Hope Savchenko began to make conciliatory statements, which did not expect from her appeals to the world and you can expect from the new defendants in exchange.