In the first months of 2016 the Russians, as well as the whole of last year, less likely to attend public restaurants, data showed consumer panel NPD Group. The number of visits overall was down 3%. The traffic subsided at traditional restaurants — 14%, pointed out by the researchers. Consumer flow, however, increases in fast food establishments and coffee shops.

If the decline in the purchasing power of Russians fast food has traditionally been better than other segments of the market, the coffee shops managed to reverse the flow of traffic in the first half of 2015, said market expert catering NPD Natalia Aristarkhova. “In Russia, coffee houses became an intermediary between restaurants and fast food, we they do not represent monocoat in the West, and a mini-restaurant, atmospheric place, which in addition to coffee you can order food and alcoholic beverages, the average check is significantly lower than in the restaurant,” says Aristarkhov. 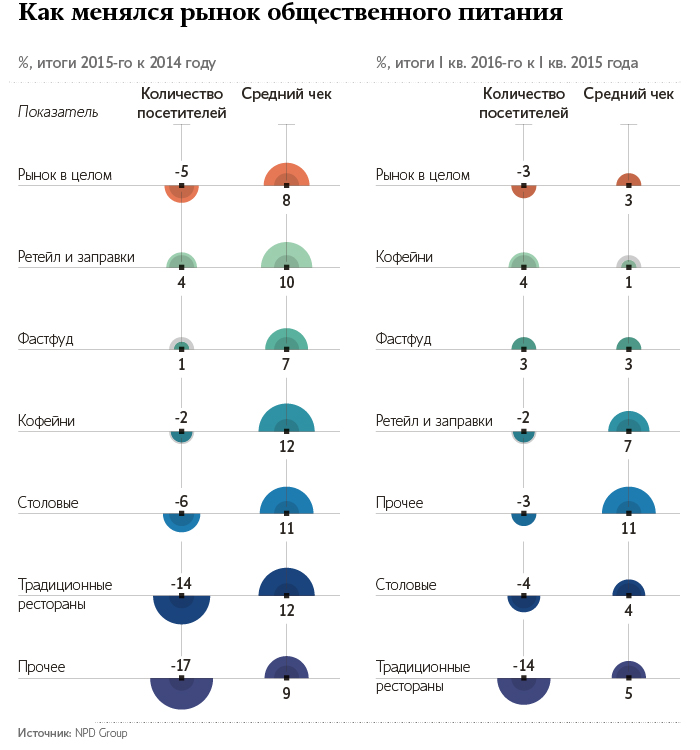 According to the study “Reindex” Ipsos, Comcon, on the dynamics of attendance coffee even bypassed the fast food in 2015 due to the fact that the average ticket amount in them remained very affordable — at the level of 390 RUB.

In the first three months of 2016, the average check in fast food outlets increased by 3% and only 1% in coffee shops. Over the same period in restaurants it was up 5%, from the catering points at gas stations and in retail — 7%, according to NPD. The absolute values of the average ticket price the researchers do not lead.

Official statistics show that in 2016 the rate of decline of the restaurant market slightly decelerated to 5%. According to Rosstat, in January—April sales totaled 397,8 billion rubles (more recent data are not available). Cumulative sales of Russian restaurants, bars and cafes in 2015 fell by 6%, to 1,293 trillion rubles.

In 2015, the actually observed increase in coffee houses Costa Coffee, said the representative of the holding company Rosinter operates restaurants IL Patio, Planeta sushi, coffee shops Costa Coffee etc.) Elena Mazur. Although accurate data on this subdivision of the company does not disclose, according to Mazur, the coffee prices rose on average by 3%, in other restaurants of our group meals have risen in price more. 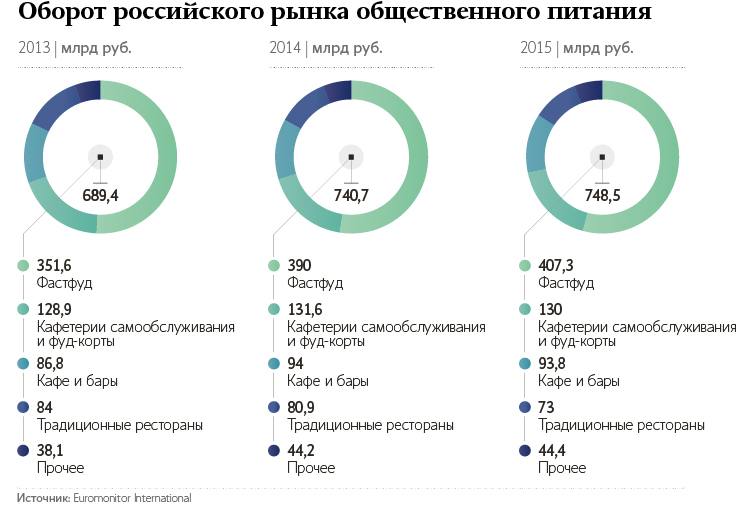 Brand Manager network of coffee houses “Shokoladnitsa” Yulia Afonina said that in 2015, the network did not increase the prices of basic position by the margin. “We are seriously look at the menu of coffee houses because of changes in consumer behavior. Guests indulge in coffee, but rarely bought some positions,” says Afonin.

Prices have been kept and the largest Russian operator of fast food “McDonald’s”, said earlier the company’s President Khamzat Khasbulatov. “We have to correct the sentence, because the price increase should be below the national inflation. Menu as a whole should be available,” said Khasbulatov, explaining that the industry will not be able to shift the increased costs to consumers.