“The price will be discussed for a long time“

— LUKOIL officially declared interest in buying the state stake in Bashneft. What is the appeal of this asset?

The appeal is that we work together for a long time. We have a joint venture. We are the largest supplier of oil to the refineries of Bashneft, know their refining capacity, their team and appreciate leaders who now head the company. At the time, I was the first Deputy General Director of “Bashneft” by managing its assets in Western Siberia, and the company was hugely supportive of West Siberian oil. And, of course, we have a lot of integration issues and joint programmes. I therefore hope that, if the price is reasonable, Bashneft will be a very attractive asset.

— What price are you willing to pay?

— Price will be discussed for a long time. We care today, don’t let the government represented by the Ministry of the economy decided on the terms of privatization of “Bashneft”. We hope that they will be clear by September, and then we can talk about the amount of the transaction.

— What is the maximum premium you are willing to give controlling stake of “Bashneft”?

The company believed that the acquisition of a controlling stake, as a rule, the premium ranges from 15 to 25%. That’s what I’m focused when doing an oral statement. I would like to emphasize that we expressed interest but did not make the final proposals to the government, because there are no conditions under which will be assessed asset. This striking change in the direction of increasing. At the beginning of the privatization in January, “Bashneft” was worth $4 billion today — more than $7 billion a growth of capitalization showed no company in the energy sector. That is, the market has a speculation. We stress that it is ready to participate in the deal, but at a reasonable price.

— You spoke with the government of Bashkiria on the sale of their package?

“Yes, of course, the conversation was. I believe that any new controlling shareholder will seek to acquire 100% of the company to be able to reorganize and optimize the management structure, of course, together with the leadership of the Republic of Bashkortostan.

— If You buy “Bashneft”, then combine it with LUKOIL or leave it an independent company?

— There are two ways. But as I said, the management of Bashneft deserves the kindest words. They’ve done a great job, so we believe that the company should be maintained.

— You predicted the price of oil this year in the range of $45-55 a barrel, and by the end of the year perhaps a little higher. What is your forecast for 2017? What factors may push the oil prices to at least $60?

The predictions that I gave two months ago, are justified. We were expecting a price of around $50, and today we see a number of factors that will enable our industry to still get a fair price for our goods. We believe that it is in the range of $60. But most importantly — our suppliers and contractors have begun to reduce the prices of their goods and services. That is a psychological turning point has passed, today all really look at things, and together we are teetering on the profitability that will allow us to quite successfully work and at $40, $50 and $60.

The second factor is still the last session of OPEC showed that the countries —oil suppliers can negotiate. We waited for her in a very large voltage, because within two years OPEC has lost its function as a regulator. For 15 years could not agree on the election of the President, the Secretary of OPEC. At this session elected a new Secretary, began the dialogue. The results, I hope we feel in the autumn session, when succeed, it may be, specifically agree on quotas for the supply of oil to the world market. Plus all the same industry of China and India, and Europe is showing good growth and consumption of our product. All this enables us to the end of the year to see the price of oil above $50 a barrel.

In 2017, this trend will continue. There will be a sharp increase in production, but not a sharp drop. We therefore hope that the crude oil market to balance at $60. 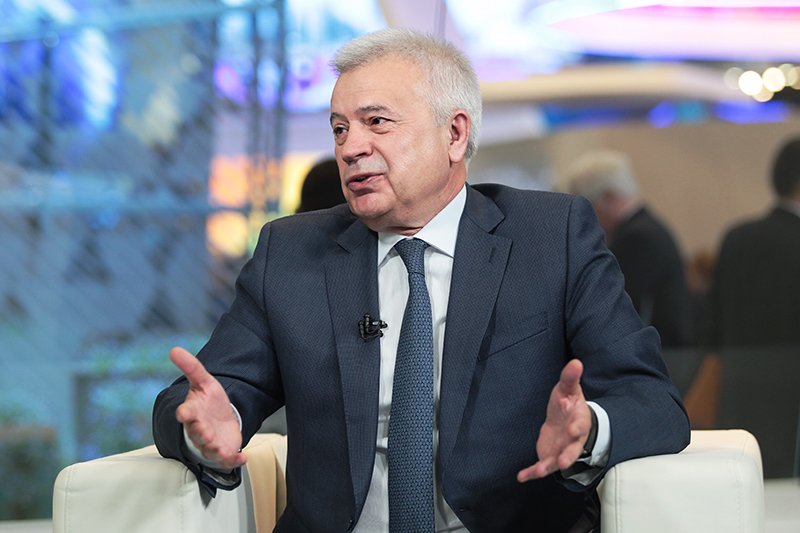 — LUKOIL is one of the few companies that hedged foreign exchange risks remained in the black. What you have put in this year: the growth of the ruble or the fall?

— Unfortunately, we can’t predict the exchange rate, because going fairly strong fluctuations and the correlation between the oil price and the ruble, which was the full year 2015, today can not be traced. So we work in real time and while not gedirem neither the goods nor the exchange difference.

Now there are disputes about the tax maneuver. The energy Ministry, the Finance Ministry and the oil company cross swords, whether it’s the added tax income or on our financial results. What compromise would be acceptable to you and at what yield is possible to speak about expediency of this tax?

— I have repeated many times, for our industry, most importantly the stability of the tax legislation. How shake our industry over the last five years about 20 times changed the system of taxation, excise policy… We are now in favor of stability. Yes, the tax on financial results more predictable, but we do not want to this led to the increase in the tax burden on the industry. But, as a rule, any change leads to an increase. We don’t want to compensate him for the expense of our consumers. From January 1, excise duty on a liter of gasoline is 4 RUB. We have taken this burden upon themselves and bear the losses. Therefore, in the first quarter from oil companies in Russia such low results.

For any of your fields and projects the most interesting would be a new tax regime?

— First of all, the new tax system should take into account of field operation at the late stage, to prolong their life. Such projects are in Western Siberia, where our produce is over 90% water. The company produces per year 400 million tons of water — what a huge energy consumption is on these processes! Watch American deposits profitable to exploit when they produce 0.5 tons per day, our — at 5 t it is not profitable. It is not talking about what technology is missing, and imperfect tax system. Plus new taxation could be beneficial for fields that must be entered in the operation to maintain production levels.

“When it comes to oil and gas, we always start talking about hot spots

— This year can be put up for auction the largest of the last remaining fields Aginskoe. Recently it became known that the conditions may include the need to involve a foreign partner in the form of the Arab Fund Mubadala. Are you ready to go to the auction on such conditions?

— I believe that the owner has the right to put any conditions it deems necessary. Therefore, we only have two options: either to agree to go to the project or to refuse. We believe that Argunskoe oilfield to LUKOIL interesting. It is located in the West Siberian oil province, where we have a natural decline in oil production. We always work with partners. And Mubadala is one of the best partners that can be from oil companies, so we don’t have any objections.

— LUKOIL’s many assets abroad, but in recent years had problems with the regulator and financial claims to Bulgaria and Romania. How is the settlement process?

— In recent years we have encountered significant problems, particularly in Eastern Europe, primarily in Ukraine, which prompted us to sell the retail assets in this country. We have also sold their assets in the Baltic States. In Romania we have for more than a year, there is a trial. We hope that the court objectively and substantively will consider all the factors. But most importantly, all restrictions on movement on the territory of Romania and abroad with our leaders today lifted. This is a big step.

— Proceedings in Europe have more political motives or is it purely economic history?

— Our industry is politicized. When it comes to oil and gas, we always start to talk about hot spots. Today, claims economic. We challenged them through the courts, and, of course, being so long delayed consideration of our questions, surprising. In General, it pushes us to rethink its attitude toward the assets, especially assets downstream (refining of crude oil. — ) located in Europe. Maybe collect them in a separate European companies that would be quoted on the stock exchange, or even in the medium term to sell parts or whole. Because the difficulties which brought about the destabilization, and these assets are not strategic for us. In recent years, we focus on the exploration and development of oil and gas fields.

— The Syrian leadership was asked to help rebuild the infrastructure of the Syrian Energy sector. How you are interested in this offer?

— We are actively working in Iraq, Saudi Arabia, are now preparing to go to Iran. But on Syria while the us proposal was not official, and while fighting is going on, of course, to make investment decisions, I would not recommend to ourselves, nor to our colleagues.

— LUKOIL worked in Iran prior to the sanctions, but then we were forced with our partner Statoil to withdraw from the project “Anaran, where we opened a good Deposit. Today we made a formal offer to the Iranian government to return to the project. Our experts are ready to very quickly enter the field in operation. Plus we are discussing with the Iranian oil Ministry and National company our participation in a number of fairly large deposits that are already in operation. We signed two agreements with the National company for the study of the coastal part of the Persian Gulf. Our geologists received access to the materials, and we are grateful to our colleagues in Iran that the company had the opportunity to study not only a single field, but a whole province.

— In India, Indonesia, China, and now look where some market participants have plans?

— While we have decided to concentrate on a few promising provinces. First, of course, the Persian Gulf, Iran. The second Gulf of Mexico and Mexico. Third is Norway.

— In the framework of strategic cooperation the head of “Gazprom” Alexey Miller has suggested you to install at the gas station LUKOIL special modules for refueling vehicles with gas. How it is beneficial to offer?

— We have a number of stations in Russia, Moldova, Romania, which of cars run by natural gas. And they work quite effectively. If “Gazprom” will make a good suggestion, we will certainly support this initiative. Because we have in General with “Gazprom” the strategic partnership. Our contracts and agreements designed for a long period of time and give our company a very comfortable feel in the implementation of natural gas.

— What dangers do you see in connection with the development of technology?

— Sometimes we face a problem when some of our technological objects is a glut and the failure of small little sensor stops all production. We believe, therefore, that large, especially explosive objects, must use sophisticated technology, but quite moderately. We see that technology does not allow us to completely eliminate the penetration of our closed system to outsiders. Threat of disaster due to the actions of hackers is quite real. So of course we put a lot of money in the creation of a system of technological security. That is, we can’t completely eliminate the human factor, so trying to combine the technological innovation of today with the training of personnel.