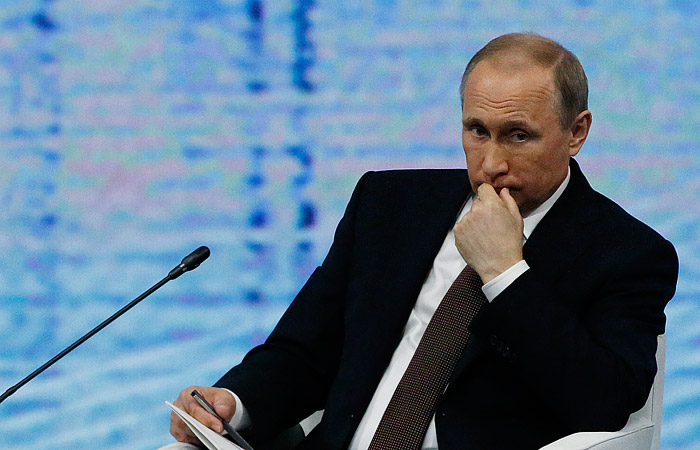 Moscow. June 18. The President of Russia Vladimir Putin became the key event of the second day of the St. Petersburg international economic forum 2016, and the head of state by a wide margin leads the ranking of references of participants of the Forum in the category “Power”, the data in the system of media analysis “SKAN-Interfax”.

In his speech at the forum the President touched upon various issues – the situation in the world economy, political situation, upcoming elections in the United States, said on the feasibility of establishing the EAEC on the basis of a wider integration of education with the participation of China, India, Pakistan, Iran and some CIS countries. Special attention he paid to the Russian business, saying that Russia will continue working on liberalization of the business climate, announced the establishment in the near future in Russia the presidential Council for strategic development and priority projects. Vladimir Putin also pointed out that law enforcement officers whose actions led to the destruction of a business must carry personal liability, including criminal liability. “We need to radically reduce opportunities for illegal criminal prosecution. Moreover, representatives of power structures should be held personally responsible for inappropriate actions that led to the destruction of the business”, – said the head of state at economic forum in St. Petersburg.

In addition, the President of the Russian Federation have commented extensively on the problems faced by Russian sport, saying that the fight against doping should be conducted at the state level, as well as assessing the decision of the International athletics Federation about deprivation of the rights of Russian athletes to go for the upcoming Brazil Olympics.

On the second place of the rating “Power” at the end of the second day is the Minister of economic development Alexei Ulyukayev. Media has quoted his statements concerning the decisions on retirement age and benefits: the Minister proposes to maintain the cumulative system of pensions, but to raise the retirement age to 63 years. Commenting on the issue, which the Finance Ministry believes that if nothing is done with the pension system, you will have to raise taxes, economic development Minister Alexei Ulyukayev remarked that: “If nothing is done with pensionnoy, it is possible. I believe that raising the retirement age is a natural solution.”

On the third place ranking – the Prime Minister of Italy Matteo Renzi. He, in particular, stated that Italy will ask at the next meeting of the ambassadors to the EU to have discussions and do not allow automatic renewal of sanctions against Russia. At a press conference together with Russian President Putin and Renzi also favour continued implementation of the project “South stream”. In addition, he was assessed as incorrect the NATO operation in Libya, but also Russia and Italy have agreed to cooperate in the conservation and restoration of monuments in the Syrian Palmyra.

First place in the ranking “Business” at the end of the second day took the head of Sberbank German Gref. Recall that the “Business Breakfast” Sberbank of Russia traditionally is one of the key events of the forum. This time it was held under the theme “Life after oil”. Media actively quoted Gref statement on the situation in the banking sector, in particular, his assessment of the depth of the crisis. “Of course, continues (the crisis in the banking system – approx. If). We see this year, the same rate of exit of banks from the market, withdrawal of licences, the profitability of the banking sector continues to suffer – of course, it’s a stage of crisis that we saw in the second half of 2014 and in 2015. But if you compare 2016 from 2015, the situation is much better. Last year was critical for the banking system,” – said Gref.

In second place ranking is a head of “Gazprom” Alexey Miller. The media wrote about his meeting with the Hungarian foreign Minister péter Szijjártó, during which they discussed Russian gas supplies to Hungary, the transit to a third country, and the use of capacities of underground storage of gas on the Hungarian territory. Significant media attention was paid to the reports that “NOVATEK” wants to buy from Gazprom 3 billion cubic meters of gas for sale in Europe.

The third place of the ranking “doing Business” took the head of “Rosneft” Igor Sechin, who signed with the President of BP Russia David Campbell, a legally binding document on the establishment of a new joint venture (JV) – Ermak, OOO Neftegaz”. The joint venture will be engaged in geological exploration in two areas of mutual interests. In addition, Sechin continued to comment on the situation on the oil markets, in particular, the position of Saudi Arabia. “Let the Saudis keep an eye on us, because while we’re not slipping nor India nor Indonesia. That’s where the main battle develops competitive. There, in the Asia-Pacific markets is increasing consumption,” he said in the course of communication with journalists at SPIEF.

Alexei Ulyukayev, Minister of economic development of the Russian Federation

Anton Siluanov, Minister of Finance of the Russian Federation

Maria Zakharova, a spokesman for the Russian foreign Ministry

Alexander Tkachev, Minister of agriculture of the Russian Federation*

Maxim Sokolov, Minister of transport of the Russian Federation

Denis Manturov, Minister of industry and trade of the Russian Federation

Sergei Ivanov, head of presidential administration of the Russian Federation

Alexander Novak, Minister of energy of the Russian Federation

Alexey Miller, Chairman of the Board of “Gazprom”

Igor Sechin, the head of “Rosneft”

Vitaly Savelyev, the head of “Aeroflot”

Dmitry Patrushev, Chairman of the Board of Rosselkhozbank

Peter Fradkov, CEO of the REC

Dmitry Strezhnev, the head of “EuroChem”

Yury Isaev, the head of the Agency for Deposit insurance

Boris Nuraliev, the head of “1C”