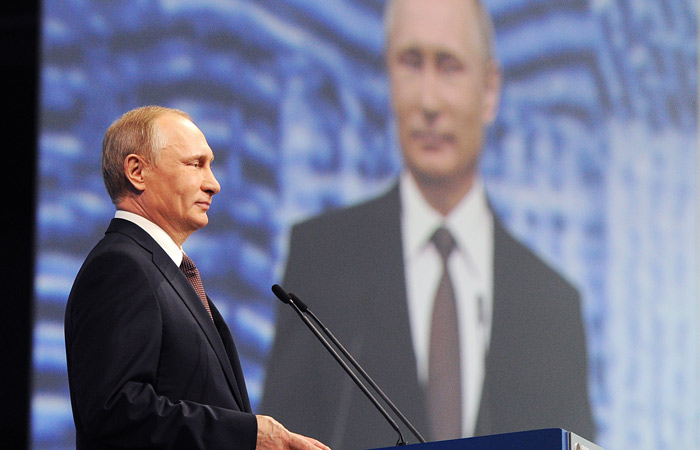 Moscow. June 20. Russian President Vladimir Putin became one of the most memorable participant of St. Petersburg international economic forum in the “Person Power,” and his performance is the most widely covered in the media.

One of the main news was announced by the President of the Council under the President for strategic development and priority projects, which he headed. “It is obvious that the tasks we are facing require new approaches to management development. Here, we intend to actively use design principle. In the near future Council will be established under the President for strategic development and priority projects. Your humble servant will lead it, and by the Presidium of the Council will be the head of the Prime Minister of the Russian Federation Dmitry Medvedev”, – Putin said on Friday at the plenary session of SPIEF. The main task of the authorities in the field of business climate, the head of state was formulated at the meeting with heads of major international companies: “I Really hope that I won’t affect people like you”.

On the second place “Person.The power is the Minister of economic development Alexei Ulyukayev. The media noted the various fragments of his speeches, including the question of the base price of oil for calculating the budget for 2017; the fate of pensions, the Minister said that in 2017 the indexation need to spend on the actual inflation, to keep the cumulative part of pensions, and after 2018 to gradually raise the retirement age to 63 years; questioned the need for budgetary rules: “I believe that we need a fiscal rule, but we need the right budget. The right budget is the budget that orients us to the development.

The third position in the final ranking is the head of the European Commission Jean-Claude Juncker, who gave an assessment of relations of Russia and Europe at the moment, announced its intention to discuss with the President of the Russian Federation the question of cancellation of sanctions, and also commented on the question of possible British exit from the EU: “I would give advice to my British colleagues not to do… If they decide to leave the EU, a period of great uncertainty, both on the EU and global level.”

In the final ranking “Person.Business” first place was taken by the head of Sberbank German Gref, under whose auspices is one of the most significant events of the Forum – Business Breakfast.Journalists actively quoted Gref comments on the fate of the Russian banking system: “this year, I think 600-700 billion rubles of profit will get a Bank sector and in General, the situation is recovering. I think a few years will need to adapt to the difficult economic situation”, – said Gref to journalists. He also noted that the crisis in the banking sector continues, however, the situation is better than it was a year ago.

In second place is the head of “Gazprom “Alexey Miller. The transit of gas through Ukraine, the migration routes of the Central corridor to the North and the prospects for the Nord stream-2” – these are the topics most actively voiced by the media of the array statements Miller on the Forum. “Gazprom” has noted the trend of growth of demand for Russian gas in North-West Europe, which determines the migration routes from the Central corridor to the North. This opinion was expressed by the head of “Gazprom” Alexei Miller, speaking Thursday at the St. Petersburg international economic forum. “We are now seeing the growth of demand for Russian gas in North-Western Europe. It is not only traditional consumer countries, as well as those camps that focused on their prey, and now it shows decline,” he said.

Third place is taken by the head of “Rosneft” Igor Sechin. The media followed the forecasts made on the price of oil. Sechin, speaking at one of the specialized sessions noted improvement of the situation on the oil market, although the halt to be more cautious in assessing its stability. “Currently, the oil market started to move towards achieving the medium-term balance. Our expectations in this regard, more associated with 2017, what with the second half of this year. Of course, there is a number of uncertainties, especially in relation to the behavior of various manufacturers, which were in fact playing the role of the regulators in the oil market and the financial sector. Now there has been a definite positive trend, but despite the apparent search for balance, the risk factors are so many that at any moment we can get out of balance”, he said.

Alexei Ulyukayev, Minister of economic development of the Russian Federation

Anton Siluanov, Minister of Finance of the Russian Federation

Alexander Novak, Minister of energy of the Russian Federation

Elvira Nabiullina, Governor of the Bank of Russia

Maxim Sokolov, Minister of transport of the Russian Federation

Denis Manturov, Minister of industry and trade of the Russian Federation

Igor Sechin, the head of “Rosneft”

Dmitry Patrushev, the head of Rosselkhozbank

Sergey Kalugin, the head of “Rostelecom”

Vitaly Savelyev, the head of “Aeroflot”