Plans IPO of Sovcombank said co-owner and Deputy Board Chairman of the Bank Sergey khotimsky. Sovcombank intends to float 25% of its shares on the Moscow stock exchange, he said. “For us IPO is a very important goal. This is an element of hygiene that the correct Bank has to be public,” said Khotimsk.

The deal could take place before the end of the year, said a source close to the leadership of Sovcombank, and confirmed by another source close to the Bank. Hotimsky said that the IPO will occur “in the near future: he now can not give an exact date. “You need to wait a bit. Nobody knows what chain of events starts Brexit,” explains Khotimsk.

June 24, results were announced of a referendum on withdrawal of Britain from the EU (Brexit). He ended with the victory of eurosceptics: Brexit voted 51.9% of voters. Prime Minister David Cameron after the vote count and announced the decision to resign. The victory of the supporters of Brexit triggered a collapse in world markets.

EU leaders in a joint statement urged the UK authorities as soon as possible to start the implementation of the decision on withdrawal from the EU. The victory of the supporters of a British exit from the EU means the beginning of a “period of uncertainty”, which may last several years, fear polled by Reuters representatives of major European businesses.

According to Khotimsk, thoughts about the IPO the shareholders of the Bank was for a long time. Sovcombank originally planned to hold it after the completion of the integration with GE Money Bank, presumably in 2015. Such plans Khotimsk shared back in 2013, before closing the deal on purchase of 100% shares of GE Money Bank, a Corporation of General Electric (according to the calculations of Kommersant, the amount of the transaction amounted to 5.5–6 billion rubles). “However, to place the shares until 2014, i.e. before the crisis, they do not have time,” explained Khotimsk. 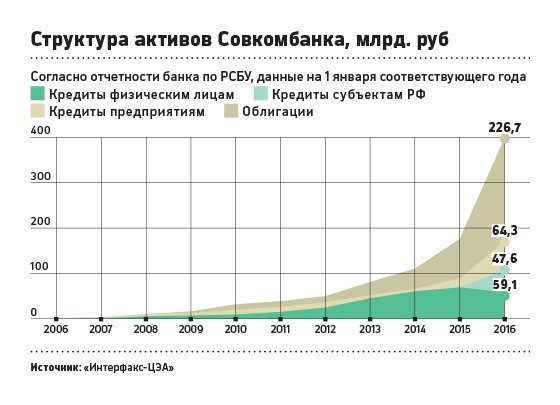 The crisis however did not put another large Bank IPO a year ago on the Moscow stock exchange is the Moscow credit Bank (ICB). During IPO the Bank was estimated at 0.93 capital is higher than then were traded at the exchange Sberbank (0.74 capital). ICD sold 18,8% of the share capital, due to what attracted RUB 13.3 billion. capitalization of the Bank after the IPO amounted to 70.2 billion roubles and 24 Jun 2016 ICD cost of 93.6 billion. 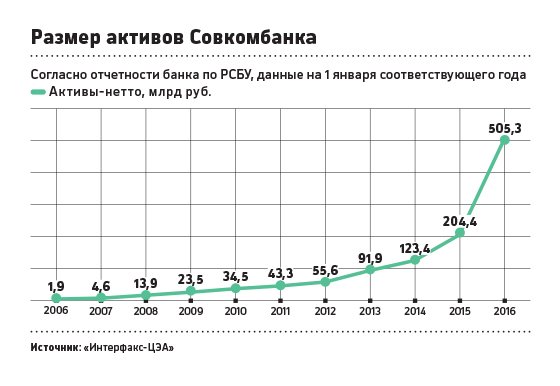 Sovcombank by the size of assets comparable to the Bank “Saint Petersburg”, whose shares are traded on the Moscow exchange. When the “Saint-Petersburg” has spent IPO in 2007, its market capitalization was $1.5 billion Now the Bank is worth about $350 million, or 0.35 the company’s equity. Khotimsk expects that the price of Sovcombank during placement exceeds one capital. Otherwise, he said, does not make sense to enter the market.

19.3 billion rubles. amounted to a profit of Sovcombank in 2015 according to IFRS

2nd place went to Sovcombank by the end of 2015, municipal bond, according to the Cbonds rating

Sovcombank is in the 18th place among the largest banks by assets (503,9 billion by June 1). Its assets grew over the year by 1.8 times — largely due to the securities that make up almost half of the Bank’s assets: mostly bonds. The Bank’s profit for 2015 according to international reporting standards (IFRS) amounted to 19.3 billion roubles, increasing by 18.5%. 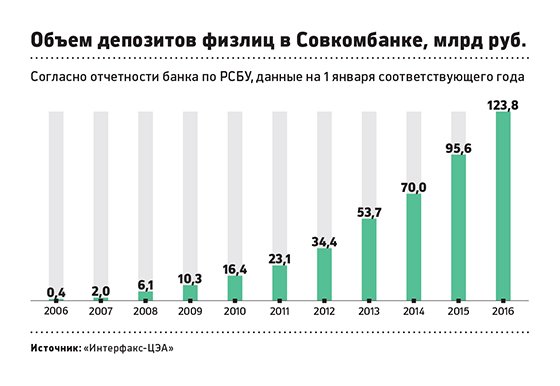 The largest shareholders of Sovcombank — brothers Sergey and Dmitry Khotimsky (for two people they own about 40% of the shares). Among the Bank’s shareholders is also the Chairman of the Board Dmitry Gusev, Chairman of the Supervisory Council Mikhail Kuchment (former co-owner of network of shops “M. Video”, the owner of the network of furniture hypermarkets Hoff), co-founder of Sovcombank Michael Crokin, the financier Alexey Fisun.

Take not on the exchange

The popularity of the offering on the stock exchange among Russian companies significantly fell. According to the National Association of securities market participants (NAUFOR), in 2015 on the Moscow stock exchange hosted four IPOs of Russian companies and banks, which attracted 29 billion RUB. In 2014 there were only two deals, and the same in 2013.

As stated in may at the conference of NAUFOR “the Russian stock market,” first Deputy Chairman of the Central Bank Sergey Shvetsov, “there is one indicator that spoils our life and brings us back from the waves of optimism, is a measure of the number of IPOs, number of the fact that the Russian economy was really in the results of functioning of the stock market.” According to the Central Bank, investors, seeing the low corporate culture of Russian issuers, give a low estimate of the action — and the issuers, seeing this assessment in no hurry to enter the stock market.

Moreover, major Russian companies have pulled from the stock exchanges. Uralkali, in 2007, placed the paper on the LSE in 2015 spent more than $3 billion to leave the exchange. During the year the company repurchased from the market of 33.5%. The Board of Directors decided to continue to support the listing makes no sense, given the low liquidity of GDRs and small trading volumes, reported by the company. In may the company also announced the repurchase of 4% from 8.96% of shares traded on the Moscow exchange; to complete the repurchase of the management plans by September. In early December, with the LSE left and the largest Russian gold miner Polyus Gold. More than 98% of the company’s shares consolidated the company the son of billionaire Suleiman Kerimov.

Contrary to the trend

Some Russian companies still plan to raise funds on the open market. “RussNeft” is going to IPO on the Moscow exchange, said in an interview with the Chairman of the Board of Directors of the Bank and the owner of “RussNeft” Mikail Shishkhanov. The transaction may take place in the fourth quarter of 2016, investors will be offered from 25 to 49% of the company’s shares, depending on demand, he said. Now 54% of shares of “RussNeft” belongs to the structures of Mikhail Gutseriev and his family (he has Gutseriev’s nephew), another 46% — from the Swiss trader Glencore. Both co-owners to sell their shares do not plan, said Shishkhanov.

March 2017 planned IPO, according to the Chairman of the Board of Directors and the main shareholder AFK “System” (owns about 76% of the retailer) of Vladimir Yevtushenkov. As reported by “Interfax”, Yevtushenkov told journalists on the sidelines of the St. Petersburg international economic forum. “System” planned to hold an IPO of the retailer in the spring of 2014, but put on hold the plans due to the Russian-Ukrainian conflict. After that, top managers of the AFC has repeatedly stated that it plans IPO “Children’s world” remain, but the company will wait for favorable market conditions to embed.

The Bank “Ugra” plans to hold IPO on Moscow exchange in the fall of 2016, reported the press service of the credit institution. As stated by the President of the Bank Alexey Nefedov at the SPIEF-2016, the organization hopes to increase the share capital on 5-10 billion rubles. “Support of the capital will provide existing shareholders, and in the fall of 2016, the Bank will hold an IPO on the Moscow stock exchange”, — noted in the Bank.

Read more about how brothers Khotimsk brought Sovcombank in Russian top-20 betting on loans to pensioners in the next issue of the magazine .