Quote in the English translation of the letter of President Recep Tayyip Erdogan, Vladimir Putin has changed. In the version that saved the Google cache, it reads as follows: “I once again express my sympathy and profound condolences to the family of the Russian pilot who was killed and I apologise to them”.

Now on the website of the Kremlin published a version of “I once again express my sympathy and profound condolences to the family of the Russian pilot who was killed and I am saying: “Excuse us.”

In Russian translation differences between the cache version and not the current: “I want to Express my sympathy and deep condolences to the bereaved family of the Russian pilot and say, “sorry”. 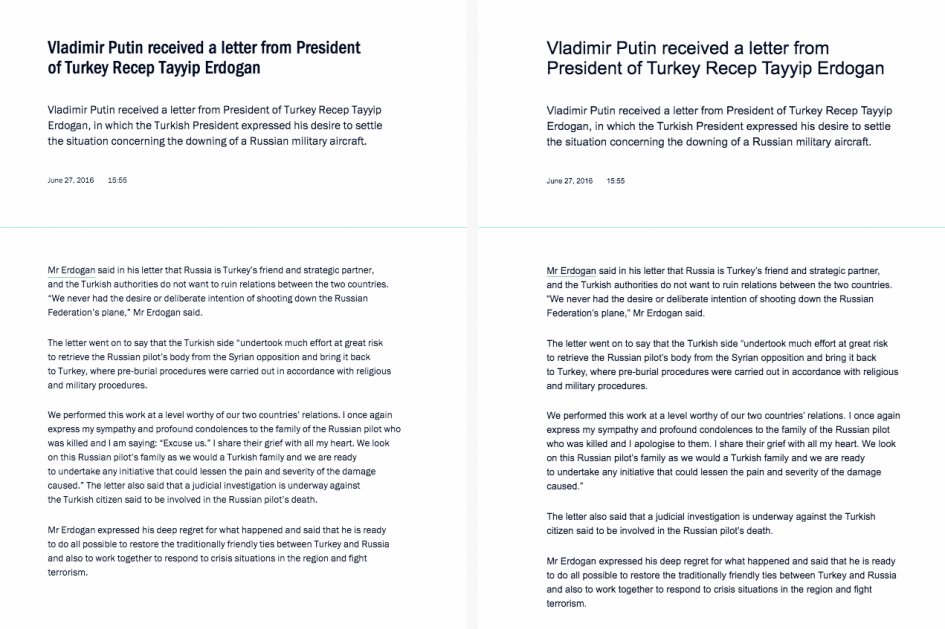 On Monday, the press Secretary of the President of Russia Dmitry Peskov said that Erdogan sent a letter to Putin in which he expressed condolences in connection with death of the pilot of the Russian su-24 bomber, shot down by Turkish fighter jets. Russian soldier Oleg Peshkov jumped with a parachute from the downed plane, but came under fire from the ground by the rebels, supported by Turkey. His teammate Konstantin Murakhtin landed safely.

“We have never had the desire and deliberate intention to bring down a plane belonging to the Russian Federation” — quotes from the letter on the website of the Kremlin. Erdogan also expressed “deep regret” over the incident and expressed hope for the restoration of partnership relations with Russia.

Press Secretary of the Turkish President Ibrahim Kalin on the eve confirmed the authenticity of the message of Erdogan. However, he added that expressed by the head of state regret is not an apology, according to Reuters. The Turkish Anadolu news Agency reports citing a source close to the President that in the letter, Erdogan did not contain a single word of “apology” for the downed Russian plane.

On Tuesday afternoon Peskov confirmed that the Russian translation of the letter of Erdogan meets Turkish text of the letter. “[The word “excuse”] for hundred percent corresponds to the Turkish language,” — said Tuesday the press-Secretary of the Russian President. Answering the question about the reasons for corrections of the English version on the website of the Kremlin, he explained: “Update translation”.

According to Cambridge English dictionary, in the use of the word “excuse” the speaker apologizes for what he’s done in error, without intent to harm, while “apologize” expresses regret over the action that was committed deliberately.

The incident with the Russian bombers took place on 24 November 2015. According to Ankara, the su-24 flew into the territorial area of Turkey. The defense Ministry claimed that the plane was shot down over Syrian territory.

Putin in this regard, expressed regret that Turkey has not followed an apology. “We still haven’t heard a single coherent apology, no offers for compensation, nor promises to punish criminals for the committed crime”, — Putin said in November last year at the ceremony of receiving credentials of foreign ambassadors.

Erdogan has refused to apologize. “I think that if anyone should apologize, it’s not us,” said the Turkish President in an interview with CNN, stressing that the apology should bring those who invaded Turkey’s airspace.