In late may, the company Roust Trading Limited was unable to repay three-year bonds issued in March 2013 and is scheduled for repayment on 31 may 2016. The company has not paid to the holders of bonds of $37 million.

Four days before default, may 27, the company offered the investors approve the restructuring plan, follows from the data published in the Bloomberg terminal. “We are talking about normal market transaction extension of repayment of a small tranche of bonds with the payment of a fee”, — said the official representative of the holding “Russian standard”. A source familiar with the negotiations, said that the restructuring involves the extension of securities before the end of November, after which they will be repaid.

“Bondholders who voted for the extension, shall be paid a Commission rate of 5% (per $1000 par value bond pays $50)”, — said the representative of the holding. According to him, the extension of the maturity of the bonds already voted more than 90% of holders, and the transaction is pending closure.

In the financial statements for the first quarter of 2016 Roust warned investors about what can be asked about debt restructuring. “If we are not able to service its debt or be faced with significant liquidity, we will be forced to reduce or delay planned capital expenditures, sell assets, restructure or refinance its debt or seek additional equity capital”, — the document says.

The bonds in question, got Tariko inherited from the Polish alcoholic holding Central European Distribution Corporation (CEDC), which the Russian billionaire swallowed in 2013, becoming the second largest vodka producer in the world after the British Diageo. CEDC was then in a state of preddefoltnom and could not pay the bondholders $1.3 billion, which was taken for expansion in the Russian market. Tariko, acquiring the holding company, was calculated with the part of the holders of securities, paying $172 million in cash and the remaining amount of debt issued new securities — credit-linked notes maturing in 2016 and 2018. Now the debt Roust Corporation under the loan notes is nearly $750 million, of which $718 million will need to repay in 2018. 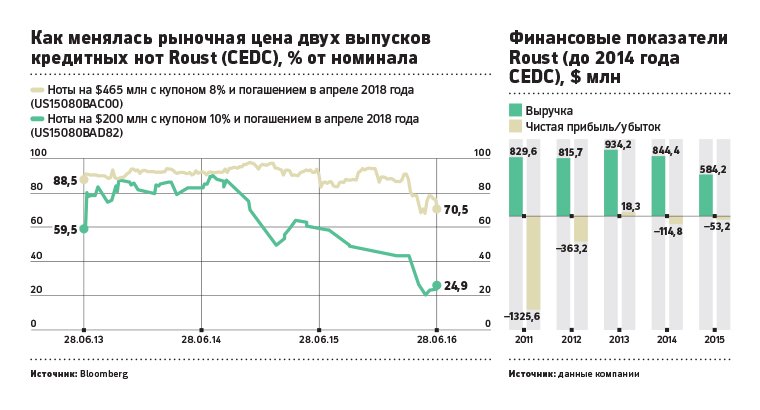 In mid-January Roust Corporation sent investors a letter in which he asked the bondholders for $750 million to disclose their positions (have). Agent of the company made by Orient Capital, which in October 2015 involved in the restructuring of bonds of the Bank “Russian standard”. Then the plan of restructuring of subordinated Eurobonds for $550 million provided for the early repayment of the holders of 18% of the nominal value of the securities in cash and the remaining amount of the debt of a special purpose company of new Eurobonds with a maturity of 7 years, provided 49% of the ordinary shares of the Bank Russian Standard.

The lack of cache

In a presentation for investors, prepared alcoholic holding Tariko in the first quarter of 2016, the company pointed to “force majeure”, which led to the fact that operating cash flow was below the optimal level: the purchasing power of Russians has fallen, the increased cost of financing from Russian banks, the main competitor — Status Group — increased sales of vodka at a minimal cost 185 rubles., and in addition, the Russian vodka was banned in Ukraine.

The ability to service the debt, refinance it, and also to invest in development depends on the ability Roust to generate cash flow, which “exert significant pressure” “negative situation” in Russia and Ukraine and the devaluation of the ruble, said in statements. In the first quarter of 2016, the company has managed to generate operating cash flow of $18.1 million, but the amount of cash and cash equivalents at end of period amounted to only $8.9 million (versus $35 million in early 2015). Part of the funds were spent on investment and debt repayment.

Vodka in the Bank’s capital

Part of the alcohol assets Tariko last year moved into property owned by the Bank “Russian standard”. In June 2015, the Bank at the expense of own funds bought shares in alcohol companies by 3.8 billion rubles., and proceeds from the sale of shares of the money a shareholder has contributed to the Bank as grant aid, thus increasing the base capital.

A similar operation shareholder re-made in September, when “the Russian standard” has bought from Roust Trading Ltd (unites assets of alcoholic Tariko) 23% 9,35 billion RUB share capital of the company “Russian standard vodka, production of vodka “Russian standard” and the owner of the eponymous brand).

Then the Bank was in dire need of basic capital in 2014 and the first quarter of 2015, “Russian standard” has shown record losses 15.9 billion and RUB 22 bln, respectively, resulting in its capital ratio under IFRS reset to zero. The loss hit on the adequacy of base capital, to avoid violations of the standards was only due to the restructuring of subordinated bonds of the Bank, whereby by the end of 2015, “Russian standard” was able to make a profit of 16.5 billion rubles.

Restructuring bonds of the holding will have no effect either on the Bank “Russian standard” or the alcoholic group company of Rustam Tariko, said the representative of the holding.

CEDC was founded by American entrepreneur William Carey and until 2008, specialized in distribution of beer and alcoholic drinks in Eastern Europe — mainly in Poland, where the headquarters is. Shortly before the crisis of 2008, the company began its expansion on the Russian market: in 2008-2009, she was at the peak of prices acquired GK “Russian alcohol” Sergey Generalova (four plants in Russia, brands “Green mark”, “Talca”, etc.), the Parliament Group Sergey Kupriyanov (the eponymous vodka “Parliament”) and a distributor of wines, Whitehall Mark Kaufman. All these acquisitions cost CEDC $1.3 billion, which Carey got on the open market, selling three issues of loan notes maturing in 2013 and 2016.

The debt was impossibly high — the sale of vodka CEDC after the purchase of Russian assets started to fall. In 2010, the CEDC for the first time recorded a net loss of $104.78 million In 2011, it reached $1.3 billion on revenue of $878 million In 2012 on a conference call, Carey said that the company has no resources to repay the first issue of credit notes for $310 million in March 2013.

Rustam Tariko, who in November 2011 acquired a 9.9% of CEDC for $25 million, entered into negotiations to increase its stake in the company.