The essence of the conflict

In March, the Ministry of economic development published a draft law on scientific and technological valley of the Moscow state University. The document proposed the establishment of a managing company, 100% owned by the state and possessing large powers in the project valleys. This structure, the government ordered to transfer the ownership of plots of land to 100 ha in Lomonosovsky Prospekt. The management company, according to the bill, will be able to issue permits for the construction and commissioning of facilities on the territory of the valley, including infrastructure. It will also prepare and approve the General plan for the valley, rules of land use and development and documentation on territory planning. A draft master plan with the authorities is not required. These questions also will not be a public hearing.

According to the government bill, the company will give the management functions of the scientific activities of the valley. In the company Charter will specify research areas in the valley, and she will self-monitor how these studies meet the rules and goals of the project.

The appearance of the bill was to guide MSU as an unpleasant surprise, said a source close to the administration. The Ministry of economic development were not invited MSU to discuss the draft law and sent it to the University for approval. Government representatives explained this by the fact that the bill was not written for a specific valley, MSU, and under all similar projects of Russian universities. The model bill, the President instructed to develop, in February responsible for this was appointed Deputy Prime Minister Arkady Dvorkovich.

As a result, the Ministry of economic development has sent to the Moscow state University a representative, who agreed with the University that will develop their proposals on the bill and send them to the government for discussion.

The draft law “On scientific and technological valley of the Moscow state University — Sparrow hills”, developed by MGU, is fundamentally different from government. In this version, are encouraged to do a project participant of the valley development Fund is a financial institution owned by MSU. It is expected that the Fund will be filled from contributions made by members of the project (10% of the profits from the project in the framework of the valley) and investors, as well as from Federal and regional budgets.

Management company, also a wholly-owned daughter of MSU, the bill proposes that the functions of the entity, which is directly involved in the organization of construction and other technical processes. The earth and the new assets will belong to the Moscow state University on the permanent basis.

“Securing MSU’s status as an agent of the Russian Federation by disposal of land in use for MSU and a ban on withdrawal of these land from Federal ownership without the consent of Moscow state University is one of the key provisions of the bill, says the explanatory note to it. In the bill it is proposed to give MSU the status of principal participant of the project “intellectual, educational and property basis” which will function valley.

The government did not agree with the proposals sent by the working group, said the source close to the administration. According to him, approved the idea of the Fund but the government wants to give him alienated from MSU land and all future new facilities, as proposed to do with the management company in previous version of the bill. MSU experts from the working group in response has prepared a conclusion that the transfer of Fund assets and the land will be detrimental to the property rights of Moscow state University. Answer the conclusion has not yet been received, he said.

The government also agrees that it is necessary to adopt for the construction of the valley of the MSU special, not a General law.”The government has a distrust of University, the fear that with its bulky structure, it is unable to negotiate, to attract investors, raise money,” says the source close to the administration.

The source in the financial-economic bloc of the government has not confirmed the information that the government rejected the alternative draft law of Moscow state University in the valley.

However, the question of the establishment of the Fund, which can be transferred to an agent of the Russian Federation and rights to land and property, which are now in use MSU, discussed, confirmed another source in the financial-economic bloc of the government. He said that the question on creation of the Fund “is under consideration, and final decisions [whether to create the Fund] is not accepted”.

The official representative of the Ministry of economic development said that the question of legal form management structure is currently being addressed.

“Nobody trusts anybody. At MSU I think that if there is alienation of land, then it can be put somewhere not on purpose. While the government may believe that investors will have more trust in their money to the government than the University,” says a source close to the presidential administration. 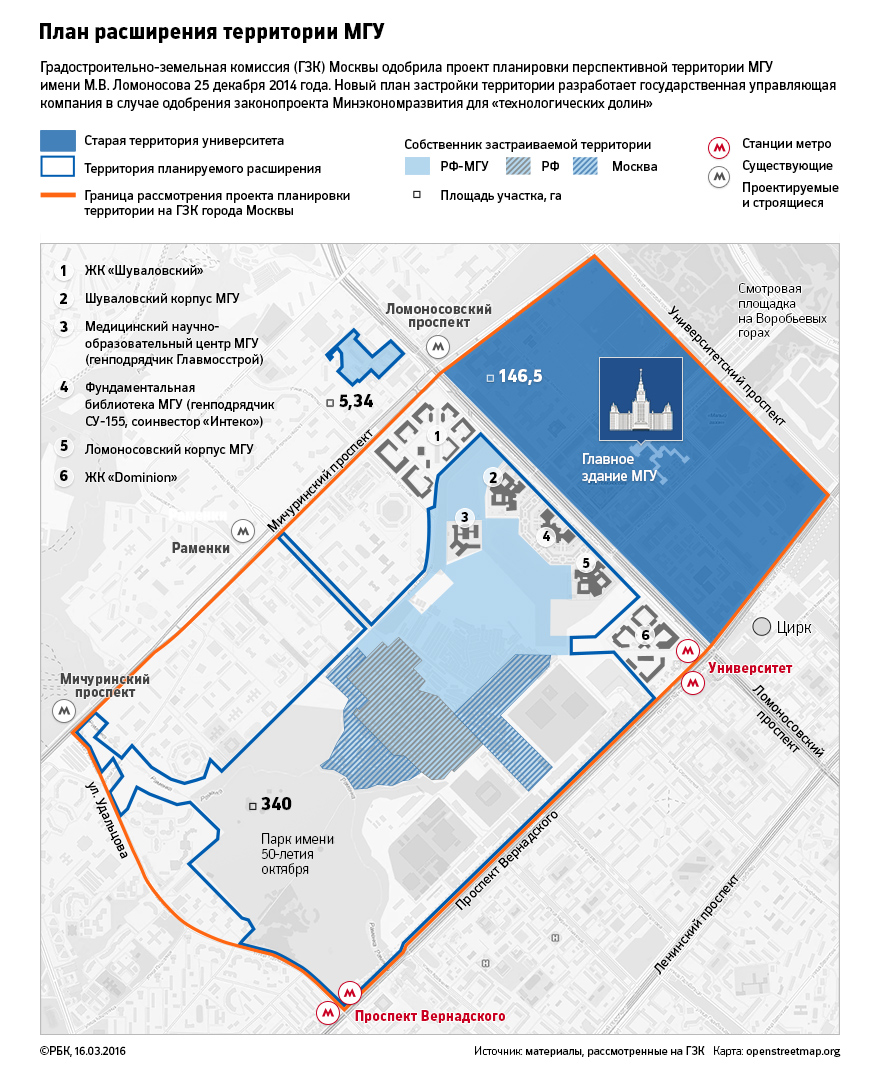 The new curator will help

The relationship Sadovnichy Shuvalov better than with Deputy Prime Minister Arkady Dvorkovich, who now oversees the project of the valley, said a source close to the administration. Shuvalov favours public-private partnership and, most likely, will not insist on the withdrawal of land from the University, suggested another source .

At the last Board of Trustees regarding the development of the valley was one of the main agenda. The next meeting of Council will be held in late summer, said Sadovnichy.

MSU leads the development of the concept of the valley in 2013. Then Sadovnichy has estimated the project cost at RUB 110 bln, and said that “within the classical University in Russia, this project will be implemented for the first time. In developing the concept of participating Fund “Inpractice”, which is headed by Katerina Tikhonova (according to sources of Reuters and Bloomberg is the younger daughter of Vladimir Putin). “Inpractice” “fully immersed in the subject and will continue to address issues of scientific content “of the valley,” claimed the source in the University.

For the years 2014-2017 “Rosneft” expects to realize with RW 17 joint projects in important areas of activity” for the total amount 530,9 million rubles, reported the press service of “Rosneft”.

From the beginning of 2016 Fund Tikhonova signed contracts worth almost 130 million rubles, the largest of them — with Transneft (RUB 88.8 million).