The operation began on Monday morning after unknown armed with machine guns, fired at police officers near Almaly district Department of internal Affairs and the Department of national security Committee. During a shootout with the attackers killed five people — three policemen and two civilians, seven were injured, said the urban operational headquarters for the fight against terrorism. By evening, two suspects were arrested.

The name of one of the assailant called the meeting of the security Council, the head of the national security Committee Vladimir zhumakanov. His name is Ruslan Kulibaev, 27 years old, he was born in Kyzylorda region, are engaged in trading cellular phones, reported zhumakanov.

Kulibaev previously been twice convicted. In 2010 for robbery with violence, and in 2012 for the illegal purchase and possession of firearms. In prison, he established ties with the Salafis, said the representative of the CSS. On the eve of the attack, Kulibaev allegedly killed a woman of easy virtue, said the Minister of internal Affairs kalmukhanbet Kasymov.

A second suspect, as the Minister said, “was just the driver.”

What was the reason for the attack in Almaty, unknown, responsibility for it did not take any terrorist organization. The responsibility for the incident two months ago, the terrorist attack in Aktobe took the previously unknown “army for the liberation of Kazakhstan”. The Minister of internal Affairs kalmukhanbet Kasymov said in June that before the attack the attackers “listened to an address, presumably from Syria.” 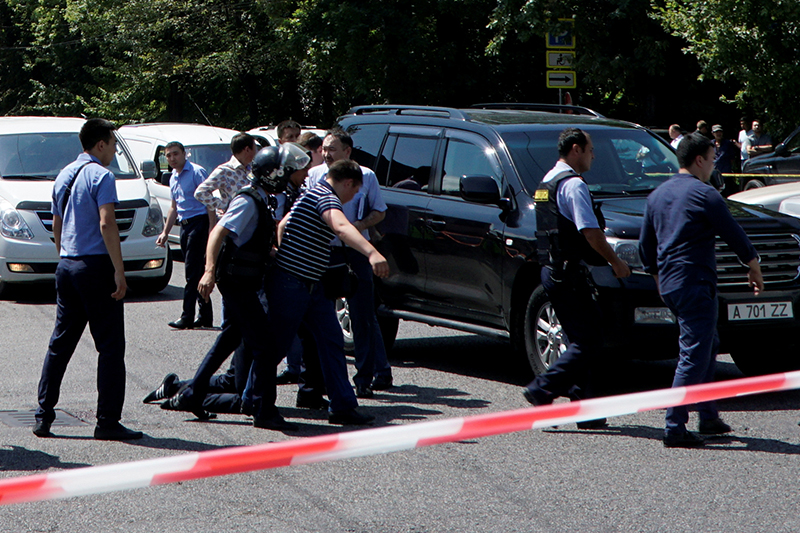 The police during the detention of a person after the attack in the center of Alma-ATA, 18 Jul 2016

The reaction of the authorities

The President of Kazakhstan Nursultan Nazarbayev has called the events a terrorist attack and convened an emergency meeting of the security Council. He instructed the interior Minister to travel to Alma-ATA. The relatives of the victims he ordered to provide psychological and material support. In the city the President demanded to provide measures to stabilize the situation. “It is important tough to stop panicky rumors, to identify the instigators. Citizens in Almaty and throughout the country should be sure that you are taken the most decisive measures to restore order,” called another as Nazarbayev (quoted by “Novosti-Kazakhstan”) .

Two months ago, when there was an attack on gun shops and military unit in Aktobe (it stormed by armed men rammed a gate taxis), the President of the security Council meeting is not convened. That he is watching events, was announced by Prime Minister Karim Massimov. Then Nazarbayev commented on the events two days later, saying that the terrorist act was organized by followers of radical pseudo-religious movements, the instructions they received from abroad. He later stated that the events were the Salafis.

After the terrorist attack in Aktobe went discussion that we should ban Salafism in Kazakhstan, was declared the control measures on strengthening of protection of objects, control of arms sales, apartment rentals rentals, recalls Andrey Chebotarev, head of the Kazakhstan research center “Alternative”. Took place in Alma-ATA, he said, shows that there are large gaps on the part of law enforcement agencies, the immigration police. “The strengthening of the terrorist threat may prompt the government to tighten state control over society and its institutions,” — said Chebotarev. “The best solution to the problem would be if the government paid attention to solving actual problems, that is, to strengthen social policy”, — says the analyst.

It is possible that after the events in Alma-ATA, the President will make personnel conclusions, the expert of Institute of the CIS Andrey Grozin. “Although the Committee is managed by a person who cannot be accused of being unprofessional, zhumakanov thirty years working in the structures, but it is obvious that the leadership responsible for intelligence work in the Islamist direction is clearly derelict,” says Grozin.

Terrorist crimes in Kazakhstan has been for many years. The first attack, according to official statements, occurred in Aktobe in 2011, after which there was a lull until June of this year. The attacks may be associated with deteriorating socio-economic situation and the growth of the terrorist underground in Central Asia, suggests Grozin.

“From year to year, the security situation in Central Asia deteriorates, the Islamist underground increases and Kazakhstan need to get used to it, the terrorist attacks in Kazakhstan is not something extraordinary, it’s just a transition to a new quality. The Kazakhs have long lived with a false sense that they are special and with them as Tajiks, Kyrgyz or Uzbeks can not be,” says Grozin. He also points out that the ranks of the banned in Russia “Islamic state” (IG) left hundreds of people from Kazakhstan. According to the Committee of state security of about 450 people.

“Kazakhstan society, especially such a special city as Alma-ATA, not so Islamized, but it is likely that the underground Islamists there still is, especially in all districts inhabited by migrants, live on ten people in a Studio apartment, there is excellent ground for the development of extremist structures,” agree Chebotarev.

“For authorities, the situation is complicated by the fact that there is no single organization like is, which would coordinate and take responsibility, it is difficult to eliminate the risk, as managers there,” says political analyst Andrei Chebotaryov.

The authorities were not aware of the degree of terrorist threat, was lost a very long time, a large number of Kazakhstan citizens has been under the influence of radical ideology, explains the reasons for the second summer of the attack by the Kazakh political scientist Dosym Satpayev in an interview to “Novosti-Kazakhstan”. Attacking the authorities, the terrorists are trying to discredit the government, he points out.

The current force majeure does not affect changes in the political system, I’m sure Grozin. This spring, after the parliamentary elections, Nazarbayev made strengthening the role of Parliament.

In the spring of this year in Kazakhstan were the most massive since the 2012 rallies. The occasion was the government’s decision on the revision of the rules of lease of land. Rallies were held in Atyrau, Aktobe, Almaty and other cities. June 6, immediately after the attack in Aktobe, the KGB stated that the organizer of the rallies, the purpose of which was the coup d’etat, was the businessman Tokhtar Tuleshov, although he was arrested on January 30, and the first meeting was held in Atyrau on April 24.