Wednesday, July 20, the jury of the Primorsky regional court acquitted two members of the “Primorsky partisans”, which in 2010 announced the hunt for police officers. In the courtroom, was released Alexey Nikitin, Vadim Kovtun — in the case of the “Primorsky partisans” they were held as accomplices in the murder of four people in the village of Kirovskiy, Primorsky Krai, where are all the “partisans”. The jury went to the deliberation room to reach a verdict on Tuesday, July 19.

This is the second in the last four years, the trial in the case of the “Primorsky partisans” by jury. The first verdict was announced in February 2014, the process lasted more than a year — from January 2013. Then the jury came to the conclusion that “partisans” guilty on all 11 counts of the Criminal code), which they were accused.

The alleged leader killed police officers group Alexander Kovtun, as well as Nikitin and Ilyutikova the jury sentenced him to life imprisonment, Roman Savchenko to 25 years in prison, Maxim Kirillov to 22 years, and Vadim Kovtun (brother of Alexander), whom the jury has not recognized a member of the group, to eight years and two months.

To court has not lived a former member of the banned in Russia National Bolshevik party, Andrei Sukhorada and Alexander Sweet: they perished on 11 June 2010 during the storming by security forces of an apartment in one of the houses in Ussuriysk, sheltering the partisans.

The group arrested was charged with three murders, three episodes related to the encroachment on life of law enforcement officers, four of assault and robbery. They were also accused of illegal acquisition, storage, carrying of weapons and theft of documents, the deliberate destruction of another’s property, plunder of the weapon, nine counts of theft, and stolen vehicles. Alexander Kovtun was charged in the attempted escape from prison. In August 2010, two months after his arrest, he attempted to escape from the convoy, which took him to a forensic examination.

That they killed police officers, “seaside guerrillas” admitted to published online in late may 2010 video. On the record Sukhorada States that they are only interested in fighting “isokoski gang.” Chief OVD tsarina’s Denis Yevsyukov April 27, 2009 killed two people and wounded eight people in a supermarket “Island” in the South of Moscow. According to Alexander Kovtun, the police covered the drug trade, prostitution, and “stealing a forest” and “know it all”, but I’m afraid to say, because on the side of security forces ‘ powers.” During the investigation of the “Primorsky partisans” pleaded guilty only to crimes that were not associated with homicide. 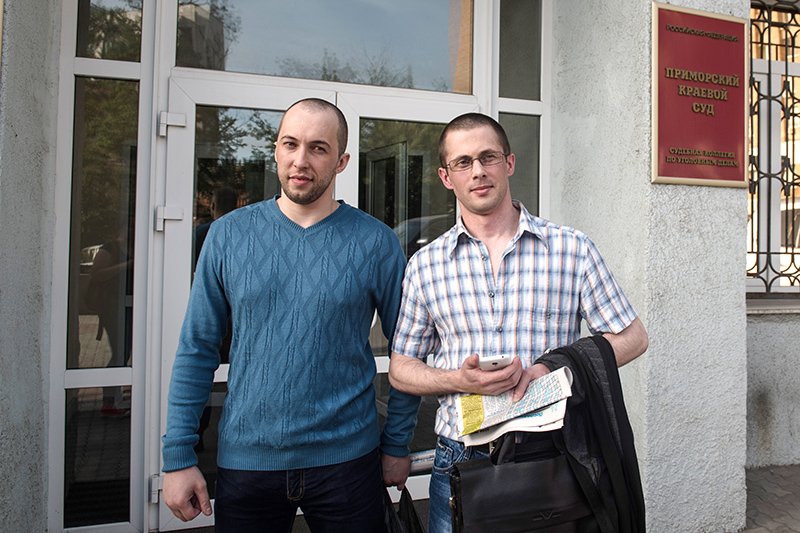 The defendants in the case of the “Primorsky partisans”, Vadim Kovtun and Alexei Nikitin (left to right), released in the court room after the acquittal verdict of the jury, at the building of the Primorye regional court

Repeated process on business “seaside guerrillas” became possible after in may 2015, the Supreme court (SC) upheld the complaint of the convicts on the first jury’s verdict. The sun softened the punishment for “partisan” Alexander Kovtun and Ilyutikov after the decision of the armed forces will spend 25 years in prison, Kirillov — 19 years, and Savchenko — 24 years.

In addition to mitigation of punishment of the armed forces decided to revise in the Primorsky regional court episode connected with the murder in September 2009, four young men in a field near the village of Kirov, where are all the “partisans”. Sun felt that this episode is not proven.

This episode was the basis for law enforcement authorities to arrest and Nikitin, Vadim Kovtun, who was not involved in the attack on employees of militia together with their friends from the group “seaside guerrillas”. They were arrested three months later after the arrest of key members of the group, which was found about 1 thousand employees of law enforcement agencies in several districts of Primorye.

As follows from the materials of the case, Vadim Kovtun picked up “guerrilla” scene, and Nikitin helped bury the bodies. According to investigators, killed on the field near Kirov young people were drug dealers, who on the day of the crime was guarding a field of hemp.

After killing “guerrillas,” according to the prosecution, buried the bodies on the same field, took the drugs and fled in a car that belonged to the victims. Later, as stated in the indictment, they burned the car to hide the evidence.

The jury acquitted five defendants in the case of the “Primorsky partisans” Video: Channel

Lawyer Julia Lutikova Chebunina on the debate of the parties during the second trial in the case of the “Primorsky partisans”, which started in 2015 after six attempts to gather the jurors, pointed out that the Prosecutor has no evidence to blame the murder of drug dealers is “seaside guerrillas”. “No blood, no land, no prints. There is something at all?” said Chebunina, quoted by the portal vl.ru.

“Primorsky partisans” denied his guilt in the murder of drug dealers. Delivering his last speech on 13 July, Nikitin told the court that he understood the grief of relatives of victims who have lost their loved ones, but these people were not killed”.

“I had a good job, earnings. There were two cars. Why should I go to kill people? For the sake of drugs? Have you seen my friends, you can judge my life from the photos. I ask you to weigh in. The Prosecutor is not a single proof, of a fact witness. I have all, ” said Nikitin.

Kirillov also noted that the Prosecutor, speaking with the prosecution, has not presented any evidence that he watched the drug dealers. “To kill people for a few bags of drugs — this is an absurd version, which was not confirmed. No evidence of the fact of sale. I want you to make an informed decision. Our fate is in your hands. To be fair,” asked Kirillov to the jury.

That in the case of the murder of four drug dealers absence of a crime, and the jury agreed.

Director of the Levada center Lev Gudkov believes that the acquittal had nothing to do with supporting society drug without a trial. In his opinion, it is most likely talking about the lack of evidence, which was earlier pointed out by the Supreme court.

“Our measurements during the investigation of the case of the “Primorsky partisans” showed that while society is largely understood the motivation of these people, these methods to achieve justice was denied,” — said the expert.

Condemned the “partisan”, according to a June 2010 survey by the Levada center, 52% of residents of Russian regions, 22% expressed they sympathy.

Still the society has a request for decision problems in the framework of the institutions, despite the continuing negativity towards the judicial system, Gudkov insists. People understand the value and necessity of the legal system, he said.