The global oil market has entered a new cycle of speculative game on the decline. Short positions of speculators in the us oil WTI bets by its cheaper — for the last week increased by 24%, similar short positions on Brent crude increased by 7%, the seventh consecutive week, follows from official data of the Commission on futures trading USA and the London exchange ICE Futures Europe, published respectively on Friday and today.

Hedge funds and other financial players terminated their long positions in oil futures and options and replace them with fresh short positions, which partly explains the decrease in oil prices in recent weeks, says a senior market analyst at Reuters, John Kemp, change tracking speculative bets on oil. Against the background of a new cycle of accumulation in short positions of international oil benchmark Brent has fallen in price on 11%, from $50,35 per barrel in early July to $44,90 Monday afternoon.

For the week ended 19 July (the latest available data come with a lag of several days), the number of short positions in options and futures for WTI crude on the American stock exchange NYMEX has increased by almost 28 thousand (up to 141,2 thousand) — the largest jump since July last year. From the end of may the number of short positions in WTI increased by almost three times, says Kemp. Similar rates to reduce the price of Brent rose for the week to July 19, 5.3 thousand (+7%) and peaked in mid-February — 78,4 thousand positions, it follows from the published today data ICE.

Long positions on oil is still far more than the short but the net long position of speculators on oil (the difference between the number of long and short positions) total for WTI on the NYMEX and Brent on the ICE has declined by 29 thousand contracts, equivalent to 29 million barrels., to 454 thousand positions, data from NYMEX and ICE. In mid-may, just before oil prices for the first time in 2016 reached $50 per barrel, the figure, reflecting the General sentiment, was at a level of 643 thousand, a decrease from that time by 30%.

On ICE the difference between a speculative long positions and short declined to 297.6 thousand, and the lowest figure since February of this year.

Since the beginning of 2015 there were already three distinct cycle when traders are first accumulated in excess of a short position in oil, and then close them EN masse. In each case, the dynamics of short positions significantly correlated with oil prices, says John Kemp. It seems that we are now seeing the fourth such cycle, the analyst writes.

Similarly, as the build up of net long positions has helped oil prices increase significantly in January—may, followed by partial elimination of this position were correlated with stop of rising prices, and now with their decline, says Kemp. When this speculative factor is superimposed on the fundamental concerns about weaker-than-expected global demand for oil.

September futures for Brent crude today, after the publication of these ICE weekly change in speculative positions has accelerated the decline: as of 18:00 GMT they became cheaper by 1.8%, to $44,90 per barrel. WTI futures for delivery in September was trading in the red by 1.9%, with a discount of almost $1.6 K price Brent. During today’s trading quotes of Brent and WTI fell to lows on may 10-11, says Bloomberg. To 20:30 GMT on Monday Brent quotes were 2.2% below the price of the previous close at $44.69 per barrel. 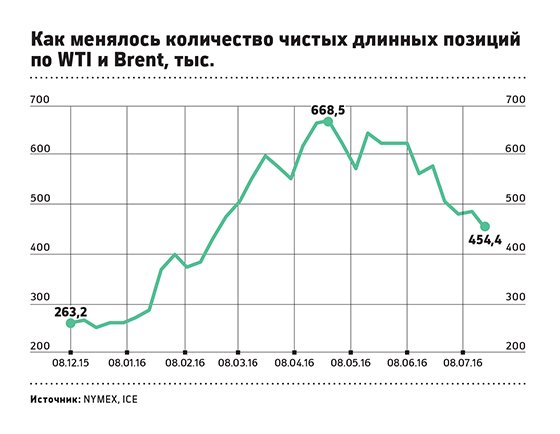 A new round of price pressures in the oil market — not the best news for the Russian budget, which was drawn up from the calculation of average annual price of Urals of $50 per barrel (then the government has revised its baseline forecast for oil to $40, but has not yet introduced the relevant legislative amendments to the budget). In the first half of 2016, the average price of Urals (trading at a discount of $2-3 to Brent) was at us $37,85 per barrel, or 33% less than in the same period last year. Due to the drastic drop in oil revenues, the Federal budget deficit in the first half amounted to 4% of GDP, and by the end of the year is projected at around 3.2 percent of GDP, more than originally planned (3%).