The representative of the Committee explained that it will finish the stadium before the end of the year, as previously planned. According to him, now subcontractors remove comments city hall to the completed works, but in the future they will probably remain on the site. “The city is interested in the delivery of the stadium in time perhaps bona fide subcontractors will be left on the object”, — reported in a press-Committee service.

The contract between the authorities of Petersburg and “Inzhtransstroy-SPb” terminated on 26 July, on the initiative of officials. They accused the company that it requires an increase in funding, does not control his actions and threatens the disruption of construction terms. The General contractor, in turn, reported on the continuous change of the arena project and the delay in payment of work performed.

The competition to select the new contractor planned for the first half of August, and the contract will be signed until the end of next month, reported the press service of the Vice-Governor of St. Petersburg Igor Albin. 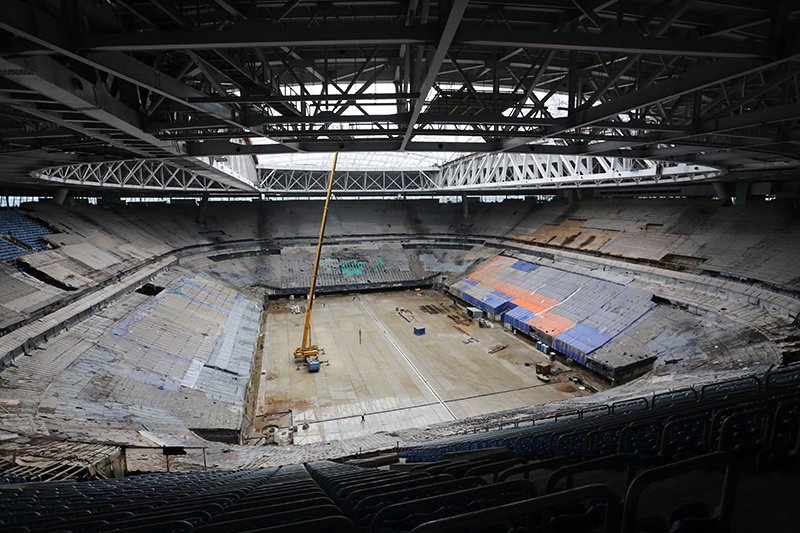 The objection of the General contractor

“Inzhtransstroy-SPb” the order of the authorities subcontractors are considered illegal. The representative of “Transstroy” (owns “Inzhtransstroy-SPb”) Nikita Pavlov says that the company is on the eve sent to all subcontractors a notice that they are required to stop all works. “Subcontractors have no direct contract with the city, and injunction is not a basis for continuing work. Within 30 days we pass the special Commission the volume of work performed, which should be in this period recorded,” insists Paul. According to him, “Transstroy” asked the Prosecutor with a request to check the legality of the ongoing construction.

An employee of one of the subcontractors explained that the subcontractors did not leave the construction site, hoping to obtain from the municipality payment for previously performed work. If the work will be completed to Transstroy, the money contractors receive, he said. The purpose of the General contractor to stop all work, to fix their implementation and to demand payment from the mayor’s office, says the source .

Given the uniqueness of the object from the point of view of there world Cup matches, everyone can make concessions, but the legal obligations in this situation, no one anyone no, says Executive Director Consulting Heads Nikita Kulikov.

“It is unclear how they will be paid from the state budget of work performed after termination of the contract of the General contract with the “Inzhtransstroy-SPb”. In hindsight they are in the new contract to be included can’t, the city will have a right not to pay. From the point of view of direct contracts each contractor shall be selected on a tender basis, other opportunities in the law for this case is not fixed. And no one has a guarantee that after conclusion of the contract, the new contractor will attract precisely those subcontractors that were building up to it, and not attract new ones,” — said Kulikov.

Arena in St. Petersburg is one of the most expensive in the world. Construction began in 2007, the cost then was estimated at 6.7 billion rubles At the beginning of June, the city government once again agreed to increase the cost of construction of RUB 4.3 billion, to 39.2 billion rubles, explaining the growth estimates the incremental costs of security of the stadium, the change rate of the ruble and expensive construction equipment.

At the stadium in the summer of 2017 it is planned to hold the matches of the confederations Cup. Now the stadium is ready by 85%, according to the official website of the arena. 50% ready engineering systems roll-out of the field, 65% of the air-conditioning system, 76% of the heat supply system and 73% — of the power supply system.