The evening auctions of currency on the Moscow stock exchange are held in conditions of high volatility. Barely, the dollar managed to recover from the first sharp drop, in which the price of the us currency fell by about 70 kopeks to RUB 66,37 as for a short-term correction followed by a new fall.

Around 18:00 GMT the dollar managed to win back some losses and lifting to 66.8 RUB went down and after 10-15 minutes fell below 66 RUB To the low value of the dollar dropped to 65.9 RUB, by 71.5 kopecks below the closing level of the previous trading session and 1.4 RUB below the record high today.

The Euro also endured two periods of falling, falling into the second in the red zone. At a minimum the value of the Euro reached 73,6675 RUB, 8.5 kopecks below the closing level of the previous trading session and 1.05 RUB below the record high today.

The first fall of the dollar occurred after the publication of the Bureau of economic analysis, U.S. Department of Commerce data on U.S. GDP growth in the second quarter of 2016. According to official data, GDP growth amounted to an annual rate of only 1.2%, while surveyed by Bloomberg predicted that it will amount to 2.6%.

Commenting on the first jump courses, a currency trader “Renaissance Capital” Levon, Atanesyan noted that after the release of downbeat statistics about the state of the US economy, the dollar began to weaken for all major world currencies. 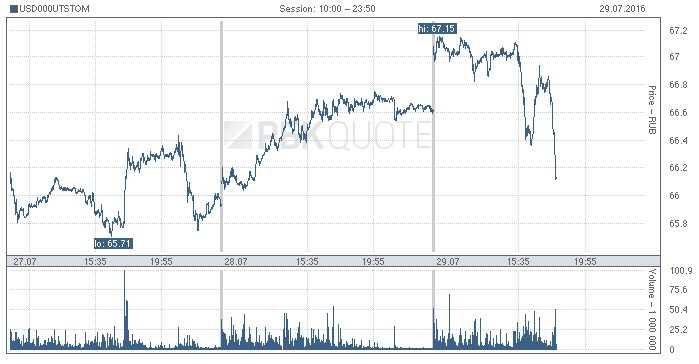 The fluctuations of the dollar occurred against the backdrop of adjustments in the price of oil, sank Friday morning below $42 per barrel. At the peak of the fall futures price of Brent oil with delivery in September 2016 reached $41,83, but in the course of the evening auction was again raised to $of 42.36.

Reaching a new bottom, the dollar and the Euro corrected upwards. By 18:30 GMT the dollar on the Moscow stock exchange amounted to 66,14 Euro 73.9 per RUB.