In the single voting day on 18 September simultaneously with the Duma elections will be elections of the legislatures in 39 regions and the election of seven heads of regions. The newly elected regional parliaments and governors will have the right to change their representatives in the Federation Council (in total there are 170 senators, two from the region). The parliaments of nominated senators from among izbrauksana there MPs and candidates in governors submitted three of their senatorial candidates.

As estimated , after examining the electoral lists of candidates, the results of the campaign in the Federation Council will be replaced by at least 24 Senator.

18 active representatives in the Federation Council from the legislative authorities of the regions not included in any of the lists of parties in elections, and are not moved with single-seat districts, so you will not be able to continue working after the change of the nominating Parliament.

Five senators will be replaced after the elections of new heads of regions — they are not in the lists of three candidates that have submitted appointed by the President acting governors. Another Senator Dmitry Sablin, went to the state Duma and, if elected, may prematurely leave his post in the Federation Council.

“To be closer to the people”

At least five senators decided to leave the upper chamber in the bottom. Famous hockey player Vyacheslav Fetisov, representing in the Federation Council of Primorsky Krai, is running for the state Duma on one of one-mandatory districts of the Moscow region from the “United Russia”. If elected Fetisov will join the ranks of the deputies of the current Duma athletes: none of them refused to participate in the Duma elections.

Senator from Moscow region, the founder of the movement “Antimaydan” Dmitry Sablin (was a member from 2003 to 2013) was elected in single-mandate district in Moscow from the “United Russia”. His desire to work in the state Duma as he explained: “Now is the time when we need to be closer to the people.”

His colleague Lydia Antonova, also representing the region in the Federation Council, was elected to the Duma in single-mandate district in Moscow.

In the Duma elections with single-seat districts from “an United Russia” has nominated senators from Tuva Mergen Oorzhak and Perm region — Igor Shubin.

All the passing in the lower house, the senators nominated from the ruling party. From the “United Russia” it is easier to win elections, says political analyst Yevgeny Minchenko.

Shubin in the Scenarios can change the President of the international Committee of the state Duma Alexei Pushkov, the loser of the primaries of “United Russia”. United Russia was elected to the legislative Assembly of the Perm region. Cannon will get a Senate seat, said the source close to the leadership of the upper house of Parliament. The MP did not pick up.

In the Federation Council will pass the Duma also influential old-timers, the first Deputy head of fraction of United Russia Yury Lipatov (in the Duma since 1999) and Sergei Popov (2003), reported the source . Both running for the regional Duma, the Moscow and Omsk regions, respectively.

Lipatov, the former Chairman of the energy Committee, said that to be elected to the regional Duma was the decision of the party, and not his own. “It was agreed that at this stage you need to take part in the work on the territory of the Moscow region, where my experience will be more in demand,” he explained. The Deputy declined to answer the question of whether he’s in if he wins the election go to the Federation Council.

Popov was already a Senator from 2000 to 2003, the Duma headed the committees for public associations and according to the regulations.

Will replace the chamber with another first Deputy head of the faction of United Russia Dmitry Saveliev, according to the source . It is included in the list of candidates for senators from the favourite on elections of the head of Tula region Alexey Dyumin.

In the Federation Council can go and United Russia Deputy Nadezhda Gerasimova, Deputy head of Committee on rules), it participates in the elections of the legislative Assembly of Nizhny Novgorod region. Gerasimov explained to his nomination by the party’s decision. On the question of whether to claim the Senate seat, the Deputy said, “Time will tell”. As confirmed by a source close to the leadership of “United Russia”, care Gerasimova from the Duma is associated with its planned transition to the Federation Council.

Returning after the break

The three senatorial candidates from the head of the Republic of Tuva is the former Senator, the widow of former St. Petersburg mayor Anatoly Sobchak Lyudmila Narusova, told the representative of regional election Committee. Narusova has refused to comment on the possibility of his return to the Federation Council, noting that its inclusion on the list of candidates is the decision of the Governor.

Narusova served as a Senator from Tuva from 2002 to 2010, from 2010 to 2012 was a member of the Federation Council of the Bryansk region. In an interview with “Ogonek” magazine in the summer of 2012 she spoke about the decision of the party “United Russia “which member it never was”, to withdraw it from the Federation Council. The reason for this decision Narusova called the vote on the new law on rallies, which she criticized. Then she left the meeting room during the vote in protest. In the interview, she also suggested that the decision not to renew its powers on a post of the Senator is associated with the opposition activity of her daughter Ksenia Sobchak. 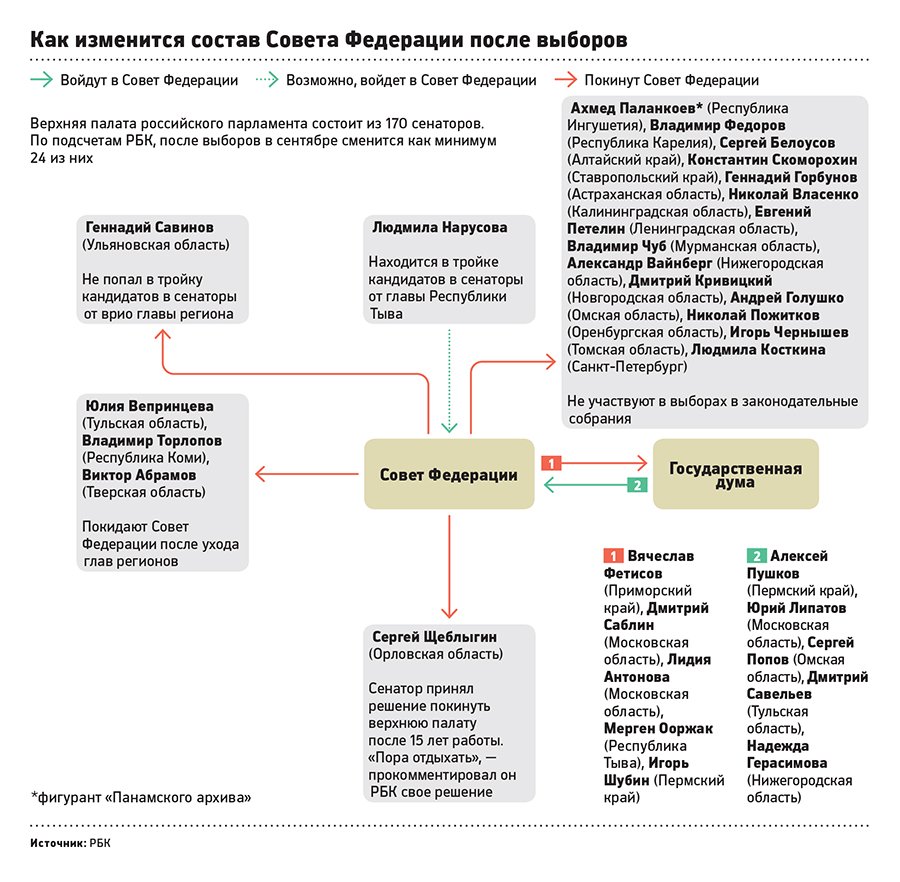 In nine regions, where elections of governors, will be replaced by five senators.

Of the seven senators from the regions, which will be of direct elections of governors, will only senators from Chechnya Suleiman Eremeev and TRANS-Baikal Bair Zhamsuev: they are the first three candidates. Senator from the Executive authorities of the North Ossetia is likely to remain Taimuraz Mamsurov, said the source at the Republican Department of internal Affairs.

In other regions new governors will be sent to the chamber of regions representatives.

Not appear on the lists of the incumbent Senator from the Ulyanovsk region Gennady Savinov, Tula region Julia Veprintseva, the Senator from Komi Republic Vladimir Torlopov and a former Deputy head of the CEC “United Russia” on financial issues, the Senator from Tver region Viktor Abramov. As previously mentioned, the place Abramova is the Commissioner for human rights in Russia Vladimir Lukin. He confirmed his nomination to the Federation Council from the Tver region.

A few senators leave the upper chamber in connection with achievement of pension age and state of health. In particular, the “retirement” was going, the Senator from the Oryol region in 2001, the President of Fund Andrey Pervozvannogo Sergey Shelygin. “I’m the Head 15, it is necessary to have a conscience, it’s time to rest,” — he explained his decision to leave the upper house.

Ex-Governor of the Rostov region, the Senator from Murmansk region Vladimir Chub is not present in the lists of candidates to the regional legislative Assembly. He led the region for 19 years — from 1991 to 2010. Chub couldn’t provide comment , as it is located on the hospital. Assistant to the Senator refused to answer whether he is to continue his political activities, noting that it would be his personal decision.

Also the house will leave the head for the last 12 years, the agrarian Committee Gennady Gorbunov told the RIA Novosti news Agency a source in the Parliament. Gorbunov was unavailable for comment on Monday.

No plans to continue in the Federation Council and the Senator from Ingushetia since 2010, Ahmet Palankeen, which became a defendant in “Panama archive” in the spring of 2016. Palankov on Monday, was unavailable for comment. If he planned to continue his political career, 52-year-old politician, is unknown.

Last year, after the elections in the regions in the Federation Council came 16 new senators. In particular, the upper house of the Duma passed the representative of the Tomsk region Elena Mizulina.

The Duma elections is a good opportunity to shake up not only the lower but also the upper house, said Minchenko. After the election, possible changes in Executive power, and this can result in rasporku presidential quota in the Federation Council, he said.

Who leaves the Federation Council