The resignation of Sergei Ivanov from the post of head of the presidential administration, the Kremlin announced on Friday afternoon. Ivanov, since the beginning of August I was on vacation which left just this week, says the source in the Kremlin.

In the appointment of Ivanov was asked to work on a post of the head of administration of not more than four years, said Vladimir Putin at a meeting with the former head of the administration (transcript of the meeting published on the Kremlin website). Putin also said that Ivanov himself asked to another job, to which the President reacted “with understanding”. Another job Ivanov found immediately: he appointed the President’s special representative for environmental issues, ecology and transport. He also retained his place in the security Council.

Ivanov has long been asked to resign, saying three of the interlocutor close to the Kremlin. In 2014 he lost his son, he drowned in the United Arab Emirates. After that, Ivanov was difficult to work with, say interlocutors , official and could not recover after the tragedy. According to one source, in the summer of last year to the resignation of the head of the presidential administration was all ready, but Putin has considered that it is not yet time. It was decided that to change the head of the administration need closer to the preparations for the presidential elections, he said.

Ivanov did himself and asked to be transferred to another post, talking about this was a long time ago, says political scientist Yevgeny Minchenko. According to him, the new position of special representative of the President on ecology and transportation provides ample opportunities. “These markets represent billions of dollars, if you want to do this seriously, this is a very good position,” — said the expert. Motivation that Ivanov did not want to work the head of administration for more than four years, you only need to save face, according to the expert of the Center for political technologies, Tatyana Stanovaya, Putin doesn’t want to do of this scandal, and accompanies the official honors. Ivanov looked at the President as an equal, but on the eve of the presidential campaign, these people are not very comfortable, said a source close to the leadership of the FSB.

The post of the head of the Kremlin administration Ivanov is from 2012, before he in 2001 he worked in the government, occupying the post of defense Minister to first Deputy Prime Minister. In Putin’s government (2008-2012) Ivanov oversaw the development of the military-industrial complex, communications, aviation and space industry, as well as the construction of roads. Together with Putin, Ivanov laid the first stone of the construction of the Vostochny space centre, and was one of the most active supporters of the project “GLONASS”, in 2006 he chaired the Board of Directors of the United aircraft Corporation. Ivanov has long been familiar with Putin, he is a career intelligence officer, who worked in bodies of KGB of the USSR, Leningrad Department, he served with Putin. Together with Putin, he joined the FSB in 1999 and was later appointed Secretary of the security Council.

Ivanov has long been considered one of possible successors of Vladimir Putin on a post of the President. By the end of the second presidential term of Vladimir Putin in 2008, he and Dmitry Medvedev was the first Deputy Prime Minister of the government. In the end, the head of state became Medvedev and Ivanov remained in the Cabinet.

The resignation of Sergei Ivanov: why was replaced by Vaino?

With us in direct contact Yevgeny Minchenko, General Director of the International Institute of political expertise.

The President often takes significant figure, assigns a low position and observes how this figure is going to take this fall, says political scientist Tatyana Stanovaya. “Remember the story of Sergei Shoigu, when he was removed from the emergencies Ministry and was appointed Governor of the Moscow region. Many then thought it was the end of a career. But then he became Minister of defense. Therefore, to write off from the accounts of Ivanov’s too early,” says Stanovaya. As head of the administration, he does own the game and tried to be active in the field of fight against corruption, resembles a Deadlift, but no significant results achieved. In early 2012, Ivanov decree of President Dmitry Medvedev was appointed Chairman of the Presidium of the presidential Council for countering corruption. Since then, he has periodically reported in the media about the results of verification of declarations of officials. In February of this year, Ivanov headed the working group on monitoring and analyzing law enforcement activities in the field of entrepreneurship.

Putin lived under Brezhnev, and he remembers what led gerontocracy, when Brezhnev remained his circle of trusted people with whom he was together at the front, etc., said political analyst Alexei Makarkin. “The country has lost competitiveness, dynamism, fell into stagnation. Putin does not want to be Brezhnev and wants to upgrade the team. Hence the resignation of Vladimir Yakunin, that started it all, Viktor Ivanov, Yevgeny Murov, etc.” — says the expert.

The new appointed head of city administration Anton Vaino, who was previously Deputy Ivanov, who oversaw the Protocol, workflow, schedule and staffing issues. Ivanov himself proposed him for the position, Putin said.

Candidate W. as a mate Ivanov was discussed a year ago, when the chief of staff has asked to resign, the Kremlin says a close source . In recent years, namely Vaino was doing all the technical work, namely it’s important in the presidential administration — he kept the paperwork, schedule and staffing issues, said the source. “The other Deputy was in charge of the question of Vyacheslav Volodin’s internal policy, Alexey Gromov — information unit, Dmitry Peskov, oversees the press office. And Vaino was engaged in technical issues, he gained great influence in recent years,” the source says . 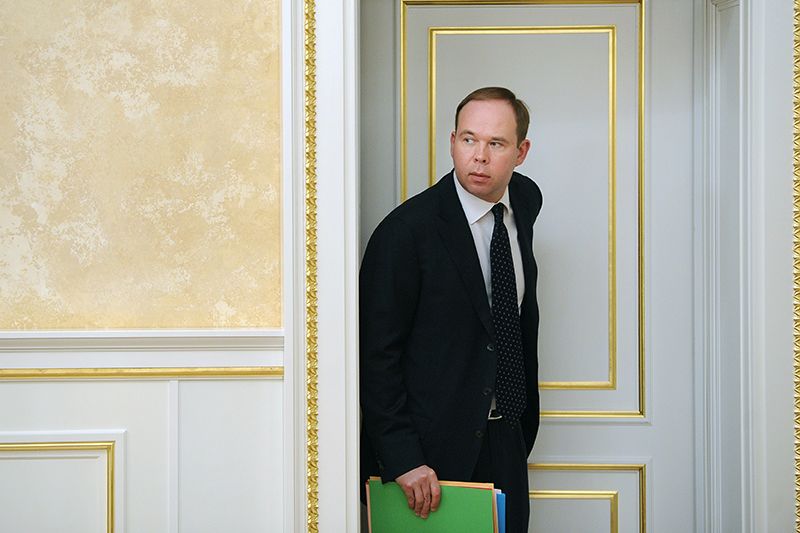 Anton Vaino, was appointed head of the presidential administration of Russia

Vaino held the post of Deputy head of the presidential administration since may 2012. He built a career in the civil service: after graduating from MGIMO, he worked in the Russian Embassy in Japan and Ministry of foreign Affairs. In 1996, he began working in the office of Protocol of the President, and in 2007 became the first Deputy chief of Protocol, and then, when Vladimir Putin became Prime Minister, went to work the first Deputy of the government apparatus. When Putin was Prime Minister, Vaino was head of Protocol of the Prime Minister in the post of Deputy head of the government staff, his immediate supervisor was a government Sergey Sobyanin. In 2012, after Putin returned to the Kremlin, becoming the Deputy head of the presidential administration.

According to Federal officials, the candidacy of W. were supported by the General Director of “Rostec” Sergey Chemezov. Thanks to contacts of his father Vaino at the time was in the presidential administration, says the source close to the Kremlin. Father Vaino — Eduard Vaino was associated with Sergei Chemezov, AVTOVAZ, 25 percent owned by Rostec. Eduard Vaino — President for external relations and interaction with shareholders of “AVTOVAZ” and a member of the Board of AVTOVAZ. The Board of Directors of AVTOVAZ, Eduard Vaino was elected this year — June 23, while Chemezov this year, the Board of Directors left. The father of the new head of the presidential administration — Chairman of the business Council Russia — Cuba in the chamber of Commerce. Anton Vaino in 2014 also joined the Supervisory Board of Rostec. The representative of “Rostec” has not yet responded to calls . Vaino also close to the main controlling Directors Rosneft and former Deputy Prime Minister Igor Sechin, a friend said Sechin.

The new Deputy head of the presidential administration was Vladimir Ostrovenko — also comes from the Ministry of foreign Affairs. His father was Ambassador to Thailand, and he worked at the Russian Embassy in Germany. In 2008, when Putin headed the government, Ostrovenko was headed by the Protocol of the White house. With the return of Putin to the presidency Ostrovenko has passed in the Kremlin.

Putin’s policy is unlikely to change from shifts, the analyst believes Makarkin. “Vaino — experienced bureaucrat, diplomat, knowing foreign languages, but the last time he was actually the head of the office, i.e. a person who is always there. Ivanov and other members of Putin’s inner circle are the people of his generation. And Vaino, the new head of the Federal security service Dmitry Kochneva, the Tula Governor Dyumin Putin has conventionally been always, under him they have risen to the highest position. This generation can not imagine a Russia without Putin. In addition, these are people who are always there — camera, security, Protocol, etc. For these new people, Putin is a sacred figure,” Makarkin explains. In addition, Anton Vaino — the grandson of the former first Secretary of the Central Committee of the Communist party of Estonia, Karl Vaino, Estonia the main Communist of those times, draws the attention of the analyst. “He was a loyal man of Moscow, avoiding even the suspicion of separatism. Therefore, the Estonian origin Vaino does not give reason to suspect him to be sympathetic, for example, NATO, which includes Estonia, etc.,” says Makarkin.

Vaino worked in the government, and he had a good relationship with Medvedev, reminds the analyst Konstantin Kalachev. Therefore, his appointment as the head of administration will mean a good relationship of the administration with the government, he said. The appointment of technocrat and not strongman says that the President wants to surround himself only with people from law enforcement agencies, believes Kalachev.

With the participation of Maria Makutenas, Elizabeth Antonova, Ilya Rozhdestvensky and Timofey Dzyadko