Neither there nor here

Metro station Myakinino-Arbatsko-Pokrovskaya line, which is near the shopping-exhibition and business center “Crocus Expo” 65-66 km MKAD, can be closed from August 22 for an indefinite period due to the inconsistency of security measures, reported in the Moscow metro on Tuesday. The station will be closed for entry and exit of passengers, the train will pass without stopping.

Press Secretary of Metropolitan Andrey Kruzhalin in the conversation referred to the fact that, in accordance with the law “About transport safety” the owner of the station had to set it on certain devices and to submit the relevant documents to regulatory authorities, which was not done. “We since 2009, wrote letters, asked, said, but we are not heard, and, in fact, it is now something came up,” — said the representative of the metro. He stressed that metro is not the owner of the station “Myakinino”.

This 178-th station of Moscow metro and the first to be built under public-private partnership. Design and construction was financed from the budgets of Moscow and the Moscow region and at the expense of private investments of Crocus Group Araz Agalarov. In the company the investment amount was not disclosed. Media reported that they could amount to RUB 600 million After registration of the station complex in the Crocus property Group private investor has transferred its operation to the Moscow metro.

Immediately after the announcement of the possible closure of the station by the owner of Crocus Group Araz Agalarov told TASS that the operation of the station carries out the Moscow metro, which produces a collection of money and the transportation of passengers.

“We are neither a contractor nor a client of the object, and investor. For us, this situation is a misunderstanding,” said the employee of the press service of Crocus Group. However, he added that the Moscow authorities did not notify the user of Crocus Group on security issues that were discovered on the station and currently the company is trying to understand the situation.

At the same time, the President of Crocus Group, which invested in the construction of the metro station “Myakinino”, Araz Agalarov explained the decision to close the station and bureaucratic casuistry. In addition, he stated that missing documents had to execute metro, reports TASS.

According to a source familiar with the situation, the way and the alarm system are on the balance of the underground and the station with the indoor space — no. “The investor planned after the completion of the transfer station on balance of the Moscow metro, but the station was put into operation with substantial defects. Initially, its energy was carried out by the Autonomous mobile power plants”, — says the source . According to him, the contract between the investor and the metro was not fixed, who owns the station and the railway facilities, therefore, now raises many questions.

After adoption of law “About transport safety” the question arose with the equipment inspection areas, which should Finance the owner of the station, but it is not the Moscow metro. Also, the owner is obliged to have employees in transport safety, which require proper training, adds the source . 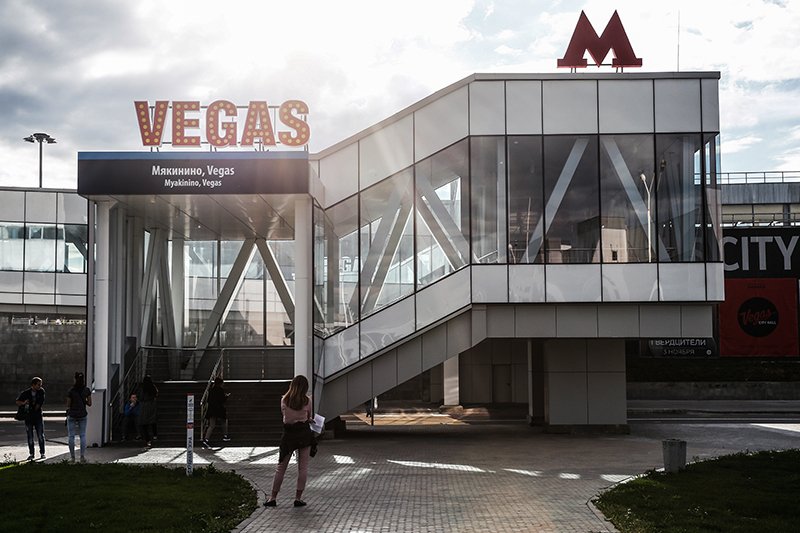 At the entrance to the station “Myakinino”

Who is to blame?

Agalarov said that any object under construction should be commissioned on the basis of a number of documents, which must be the conclusion on the conformity of Rostekhnadzor. “An opinion on compliance for one lobby was obtained at the time, and the second is not. It is, relatively speaking, pure bureaucracy, there is no link with safety. It’s bureaucratic issues, which are still not resolved,” — said President of Crocus Group.

However, he explained that the paperwork had the Moscow metro. “It’s not my problem, I just like the assistant in this situation are, because I financed the station. And the construction permit receives the subway, they should get a statement of conformity”, — said Agalarov. De jure it is the task of the underground, but de facto it turned out that they gave me, now I’m doing it. Here is the collective irresponsibility”, — said Agalarov, adding that in the near future the statement of conformity will be obtained.

At the same time, the press service of the Moscow metro stated that “the developer rhetoric covers his negligence.” The representative of the company said that the Crocus Group has not fulfilled its obligations to the Moscow metro for registration prescribed by law basic documents on the commissioning of the station “Myakinino” after construction.

According to the interlocutor , in December 2013, the Moscow metro jointly with the owner of the station was approved a schedule under which the Crocus committed to completing all work to formalize property rights and the passport of anti-terrorist protection at the station in the period up to 1 July 2014. “Warranty letters signed personally by the President of the developer Agalarov A. I., time has changed several times since 2013, but the planned activities are still not fulfilled,” — said the press service of the Metropolitan.

Araz Agalarov acknowledged that closing the plant will affect shopping and entertainment complex and concert hall located nearby. “But that’s not the traffic, and that 100-thousand Pavshinskaya Poyma will be left without transport accessibility”, — said the businessman.

The closure of the metro station “Myakinino” is unlikely to significantly impact on the traffic of customers in the shopping center “Vegas” and “Tvoy Dom”, part of “Crocus city”, because they are focused on visitors in private vehicles who come here on weekends for shopping and recreation, the Executive Director of Department of trading real estate Colliers International, Dean Postolenko. In case of possible traffic reduction due to the closure of the station “Myakinino”, the company can arrange a taxi from the other the nearest metro stations according to Postolenko. This experience company is practicing, for example, to deliver visitors in its SEC “Vegas Crocus city” at the Kashira highway.

Tunnel-tunnel mechanized complex started in Myakininskaya floodplain July 30, 2008, and December 26, 2009, the station was opened for passengers. Thus till last moment remained the intrigue concerning the name of the station. A week before the opening of the newspaper “Moskovsky Komsomolets” wrote that the station can be called “Kazakhstan”. Soon, however, the then head of metro Dmitry Gayev has denied this information. The name of the station was proposed and the investor of its construction Aras Agalarov — “Crocus city”. However, he was denied this.