Over the past two months USD LIBOR rate, which determines the global cost of dollar borrowing has jumped by a third, up to the maximum values since 2009. Typically, LIBOR is closely tied to the discount rate of the Federal reserve system of the United States, but from the end of June, we lost contact and it is clearly visible (see chart). In fact, monetary conditions tightened without the participation of the fed. It is possible to tell and differently: “the fed loses control of monetary conditions,” he wrote in early August by Bloomberg columnist mark Gilbert.

Although a scandal with the manipulation of key financial rates undermined the reputation of LIBOR, this rate still remains the most important benchmark borrowing costs around the world. To three-month LIBOR rate in dollars, which over the past seven weeks have increased by almost 20 basis points, linked financial products notional amount more than $150 trillion (interest rate is directly used in Russia, see. The increase in LIBOR has increased the pressure on all who are attracted to dollar-denominated loans throughout the world — from the consumers of retail financial products (such as mortgages and student loans) to businesses that need funds for development. Finally, the increase in rates makes the dollar a more attractive investment in U.S. currency and can influence including commodity prices, says the head of the foreign exchange and money market “Metallinvestbank Sergey Romanchuk.

The pressure will feel particularly in the USA, where LIBOR is used as mortgages and corporate lending contracts (collectively, this benchmark is linked to 15-20% of the debt of US citizens and 20-25% of the debt of American business, in the amount of $28 trillion, estimated by Goldman Sachs). In fact, the increase in LIBOR has the main driver of the global economy — the American consumer for which the credit rate is de facto increased. 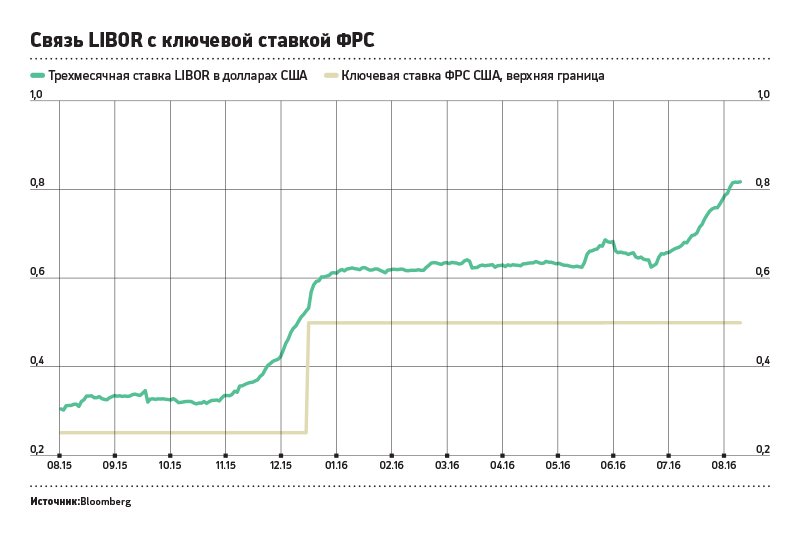 The reason for the growth

“Improving the three-month LIBOR to a greater extent a consequence of the demand for dollars and less a result of market concerns regarding the expected limitations of access to borrowed funds, — said the head of Department of the analysis of the rates of the United States in Nomura Securities George Gonsalves. The LIBOR is increasing due to the increase in rates in the short-term corporate and Bank borrowing (the so-called short-term promissory notes, Commercial paper), they grow because of the demand for dollars”.

Interviewed analysts say that the primary reason for the growth of these rates in the us market — reform of money market funds in the United States (see). The growth of LIBOR to a greater extent a consequence of the planned reform of the money market in the USA”, as well as increased investor demand for government bonds, says head of FX strategy at the Bank Societe Generale Keith Jukes. “95% of this is due to these two factors. The remaining 5% comes from factors such as, for example, Brexit,” added Jukes. This opinion is shared by head direction “rates for short-term operations,” Bank of America mark wild Boar — he is also called the main reason for the upcoming reform of money market funds.

The essence of the reform money market funds

Leading money market funds — a key source of short-term unsecured funding for banks, companies and the US authorities, as well as the main object of investment for a wide range of investors. The volume of assets under their management amounts to $2.7 trillion. The reform, which should be completed in October 2016, will require such funds to form a “money cushion”, and will allow them to perform financial obligations to the contractors within ten days if there is a risk of “RAID on the Fund” (sudden withdrawal of funds).

In addition, funds will be required to disclose their net nominal value based on the current value of the assets that they own. Thus, the value of the asset will fully reflect the situation on the market. The meaning of the reform is to make the funds more reliable, but the expectation of it causing turmoil in financial markets and major banks adapt to the decrease in the number of its funding sources when the need to maintain large “pillow” of liquidity.

All interviewed experts agreed that the rise in LIBOR is tightening conditions on global money markets.

Although monetary policy depends not only on lending, linked to LIBOR, the increase in this rate will tighten conditions in the money markets, even if the key fed rate will not change, I am sure Jukes.

Due to the growth of LIBOR to the fed, apparently, will not increase interest rates at the next meeting of the open market Committee on September 21, believes Gonsalves. This is consistent with the data of the market of futures for rate FRS, according to which the probability that the rate will be maintained at current levels (the range of 0.25—0.5%), is 82% on the evening of August 16. But the increase in LIBOR is not exactly a determining factor for the fed when deciding on interest rate. At the last meeting in late July, the fed had not invoked this factor when taking the decision to leave rate unchanged, she was talking about uncertainty in the global economy, the labor market data on wages, Brexit, etc., says Jukes. However, if the fed wants to find reasons to not continue to raise rates, they can use this factor as one of the pretexts, says the expert.

With regard to the consequences for the world financial market, due to the increase in LIBOR from doing business in dollars become more expensive, says Gonsalves. Thus, according to him, the growing spread between LIBOR and the rate the fed is unlikely to affect the dollar in the spot markets, but already has a significant effect on forward contracts for dollars in the foreign exchange market — evidence of the very high demand for dollar loans.

On Tuesday, an influential fed official head of the Federal reserve Bank of new York William Dudley said that the fed may raise the key rate next month. The increase in LIBOR follows the planned rate hike by the fed, said Sergei Romanchuk from “Metallinvestbank”. Russia will be affected depending on the impact this will have on global markets, he says. “The dollar rate has risen a little, but directly to us is, roughly speaking, is not affected. The differential in interest rates is large enough. From the point of view of attractiveness of Russian market for foreign investors, for Kerry trading (carry trade) is the difference of rates. And she is much more determined by the internal situation and the decision of the Russian Central Bank than the Federal reserve system,” — says Romanchuk.

The binding rates to LIBOR directly used by the Bank of Russia in REPO transactions in us dollars, although in recent years, such operations have little demand for credit organizations. To the LIBOR rate loans tied some Russian companies in foreign banks and even, for example, foreign currency deposits of the national welfare Fund placed by government at Vnesheconombank.

with the participation of Catherine of Marjolie