The new world of trillions of dollars in reserves

“For Central banks began brave new world (Brave New World, a reference to the dystopian novel by Aldous Huxley. — ) “—proclaimed on the sidelines of the annual three-day conference, which started on 26 August in the mountain resort of Jackson hole (Wyoming), President of the Federal reserve Bank of Atlanta Dennis Lockhart (quoted by Reuters). Monetary policy now works in the context of the unprecedented huge reserves that banks hold at the fed, writes in a scientific paper presented in Jackson hole, Professor Ricardo Reis of the London school of Economics.

Before the bankruptcy of Lehman Brothers in 2008, the excess reserves of banks accounts at the fed (over mandatory reserves) was less than $2 billion, and now reach $2.3 trillion. “In other words, the market for Bank reserves in the Central Bank has undergone a 1000-fold increase,” — said in materials for a conference in Jackson hole Professor at new York University Laura Veldkamp. Today, the management of these reserves is becoming a Central part of the discussions about monetary policy and its transmission mechanism”, she said.

The explosive growth of reserves is almost exclusively the result of the quantitative easing program (QE) which the fed conducted in 2009-2014: it funded a large-scale purchase of securities a provision in favor of banks.

Reserves is a one — day (overnight) deposits, which the fed charges banks percentage (currently at the rate of 0.5% per annum), is actually equivalent to short-term debt issued by the fed, said Reis. It’s not the money, but any Bank may at any time request from the Central Bank excess reserves, exchange for banknotes in the ratio of one to one. Not only the fed has increased its balance sheet by issuing reserves, which bear interest, — as did the ECB, the Bank of England and Bank of Japan. Until 2007 this practice was almost non-existent, emphasizes the economist. 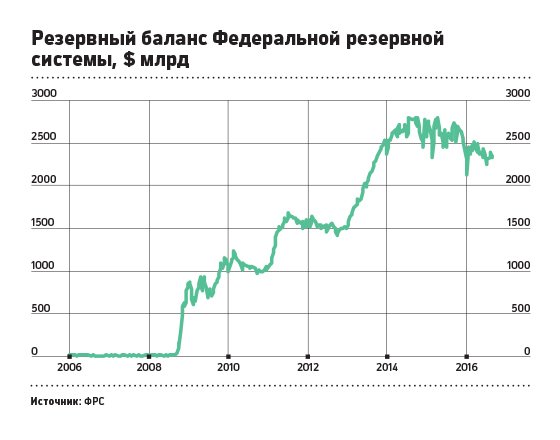 The new purpose of the fed’s balance sheet

The QE program, which was financed by creating Bank reserves, has led to the increase in assets, the fed’s pre-crisis $900 billion to an unprecedented $4.5 trillion at the moment. Strategy the fed’s “normalization” promises a gradual reduction in its balance sheet (through the future rejection of the reinvestment of proceeds from redeemable bonds in the portfolio of the Federal reserve and/or sale of these assets to their maturity): if this is not done, then in the future when economic growth will accelerate, a huge mass of excess reserves can be transformed into credit overheating. “If you sell the assets [from the portfolio of the fed] is too slow may result in excessive inflationary pressures,” he warned on Friday, Yellen.

However, three economists from Harvard’s Robin Greenwood, Samuel Hanson and Jeremy Stein (the latter worked at the fed in 2012-2014) in another paper presented in Jackson hole, looked at the bloated fed balance sheet, not as a problem but as an opportunity. They believe that the fed can afford “indefinitely” to keep the balance on the current level of $4.5 trillion — more than that, it may be necessary as a tool of maintenance of financial stability. The fact that in recent years the private sector has significantly increased the tendency of banks and nonbank financial intermediaries to the issue of short-term debt instruments, approaching cash equivalents. The fed may use its balance sheet for the placing on the market of similar instruments, thereby reducing incentives for the private financial sector to issue too much short debt. “Given the systemic risk factors associated with a tendency to the shortening of funding from the private sector, for the state, it is advisable to be an aggressive provider of secure short-term obligations, encouraging private firms to the lengthening of the structure of their funding,” write the authors of the study.

Banks, non-Bank institutions and even households show a huge demand for risk free liquid assets, hoard record amounts of cash, confirms Veldkamp from new York University. Only in part this is due to the post-crisis tightening of regulation, a significant role is played by the increased level of fear and caution, as the global financial crisis has taught that even the most improbable risk may materialize, she writes.