Undemocratic regimes may evolve in different ways: some rulers are “good” start, but later slipping into dictatorship and repression, while others start with the harassment, but then become adequate leaders. Why is this happening, tried to explain to economists — the authors of the study “Dictators walking the Mogadishu line. As people become monsters and monsters become men”, prepared under the auspices of the world Bank and published this month.

There are two classic examples. Zimbabwean President Robert Mugabe, as the study authors write, after coming to power in 1980-ies it was considered “friendly and very competent” ruler: the growth of Zimbabwe’s economy reached double-digit rates, coverage of children in middle school increased from 2 to 70%, the literacy rate has increased from 45 to 80%, and Mugabe himself even entered into the shortlist for the Nobel peace prize in 1981. But for 2000 years there has been a dramatic change: more than 90% of Zimbabweans were unemployed, 20% are infected with HIV, life expectancy has dropped significantly, many people have suffered because of the repression. 92-year-old Mugabe when this leads Zimbabwe to this day, he is older than any other existing ruler in the world.

Different was the fate of the former President of Ghana Jerry Rawlings. Leading the country in 1981, he limited the freedom of the media, began to practice torture, arrests and killings. However, against this way of government was made by the inhabitants of the country and the international community. Because of this, Rawlings had to “reluctantly” go along a democratic path, subsequently, he was supported by the international monetary Fund (IMF) and the world Bank, and in 2000 he became the first leader of independent Ghana, who gave the power peacefully. 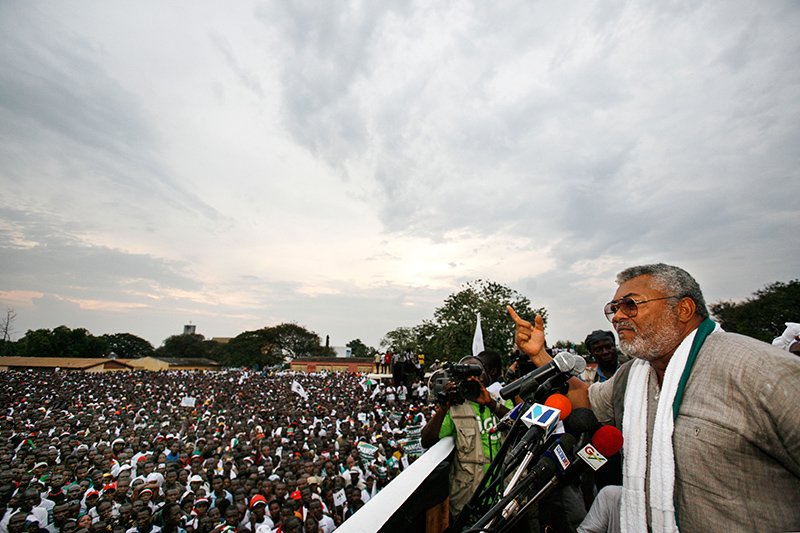 Mogadishu line — the term used in the title of the study denotes the time at which the peacekeeping mission of foreign forces in a foreign country entering a new stage of hostilities with the aim of regime change. The concept goes back to the situation in Somalia 1992-1993. Economists at the world Bank, however, decided to consider the term “Mogadishu line” more widely to include the mobilisation of local opposition that wants to overthrow the dictator.

In the proposed mathematical model citizens can displace the authoritarian ruler through a revolution, however, the latter may resort to repression, hoping to crush the stirrings of protest. The degree of determination will depend on the accumulated “sins of the past”: the dictator is afraid of retaliation, what makes him again and again to use violence to eliminate the possibility of the ouster. It is partly for this reason, cling to power Robert Mugabe, who used massive repression against the opposition in the 1980-ies, according to statements by his opponents and former supporters. In their memoirs, which are presented in the study, the “shadow” of dead stands over Mugabe and he wants to stay in power until his death.

In addition, according to the authors, more and more use pressure on opponents of the dictator can make not knowing how far he can go. “When the Governor is not sure how far he can go, for him, it might be reasonable to experiment in this dimension,” they write. An authoritarian ruler realizes that it may be removed from office, but continues to “experiment,” the authors say.

To change the behavior of a dictator — as in the worst and best — and the actions of the opposition. The authors again cite the example of Mugabe, who began to pursue more repressive policies once felt competition from the opposition “Movement for democratic change”. Brutal way to suppress opponents also had former President of Ghana, Kwame Nkruma and Ferdinand Marcos, who ruled the Philippines. But the opposite effect the protests were, for example, Jerry Rawlings, former President of Zambia Kenneth Kaunda, former President of Kenya Daniel Arap Moi, and South Korean leader in the 1980s, the years of Chun Doo-hwan — these rulers to mobilize the protesters, on the contrary, “disciplined,” write the experts of the world Bank. In General, the potential to become a dictator in the described economists model has any ruler.

The dictator is more prone to repression at high incomes, that is, with large opportunities for rent extraction. Ghana under Kwame Nkruma made a lot of money from the duties on exports of cocoa, Muammar Gaddafi and Nicolae Ceausescu in Romania grew rich thanks to higher oil prices, and the state of Mugabe ensured exploitation of diamond deposits. At the same time, the regime of Daniel Arap Moi in Kenya became less repressive after the US reduced the amount of aid Nairobi (Washington began to lose interest after the collapse of the USSR). So commodity sanctions and cuts in funding to unaccountable regimes can help to save the country from dictatorship, conclude economists.

How to deal with dictators?

Some dictators can be persuaded voluntarily to resign, remind the authors of the world Bank. They can agree to it being granted asylum or Amnesty, thereby allowing the country to elect a new leader. And there are such examples: IDI Amin in Uganda, Mengistu Haile Mariam of Ethiopia, Ferdinand Marcos in the Philippines.

Recently, however, this is not so simple, because the international community has moved to the “institutional framework” to try to achieve Amnesty or political asylum now we need the International criminal court in the Hague. Thus, on the one hand, the prospect of the court in the Hague could reason with dictators, but it is difficult renunciation of some brutal rulers. In 2011, one of the lieutenants, Mugabe told canadian publication The Globe and Mail that three years earlier he was ready to relinquish power, but has not done so for fear of prosecution by the Hague Tribunal.

Described by the world Bank model is appropriate for small countries that are not very tightly integrated into the global economy,” said Professor of the Department of political science of the Higher school of Economics Nikolai Petrov. In the case of Russia, in his opinion, an important factor is diversification of the economy, which is “inevitable” following the decline in oil prices. The presence of big business not only in oil sector but in other industries will contribute to the development of economic and political competition, I am sure Petrov. The authorities can try to go to “full-scale authoritarian model” after the state Duma elections, but this attempt, if it still will do, is doomed to failure, he said.