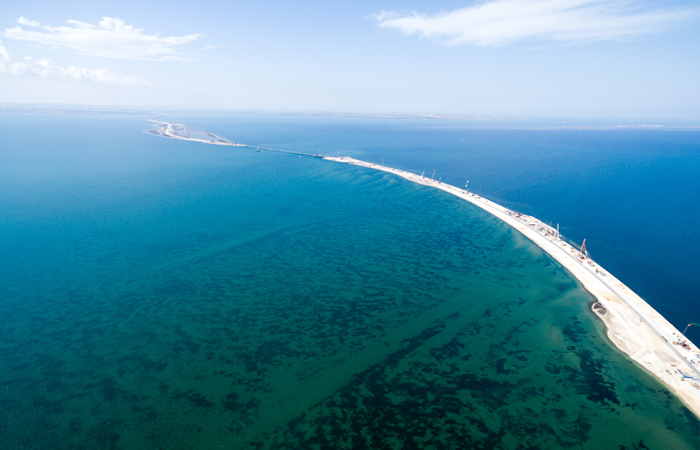 Moscow. September 1. The General contractor of construction of the bridge Kerch – LLC “SGM-Bridge” (structure of “Stroygazmontazh” Arkady Rotenberg) are included in the “Ukrainian” sanctions list, announced on Thursday, OFAC (Office of Foreign Assets Control, the structure of the U.S. Treasury, responsible for law enforcement in the area of sanctions).

We are talking about the “black list” (SDN List). All U.S. assets of individuals and organizations caught in the SDN List are frozen. Transactions of the defendants in the list with U.S. citizens or on U.S. soil is prohibited.

Also got a list of PJSC Mostotrest (till April 2015, its largest shareholder was Marc O’polo Investment, 68,45% of which belonged to the son of Arkady Rotenberg Igor, it is now controlled by the Russian Railways pension Fund “Blagosostoyanie”). In March 2016, “the company joined the construction of the Kerch bridge and has subcontracted 96,9 billion rubles.

It was reported that the company will make the device the most part of supports and installation of superstructures on all extent of road and rail bridges.

Who else is under sanctions

Included in the SDN List of fku uprdor “Taman” or ” the company “Sovfraht” and its related entities, the FAA “Glavgosexpertiza of Russia”, JSC “Institute Giprostroymost Saint-Petersburg), as well as the structure of shareholders of Bank “Russia” – “ABR Management”.

“Sovfracht-Sovmortrans” has a universal transport-logistic services, specializiruetsya on the transportation of oil cargo, organizes delivery of oversized and heavy cargo. Carries out Maritime and river cargo transportation, chartering services, ship Agency and cargo insurance. Group control General Director of LLC “Management company “Sovfraht” Dmitry Purim and the Chairman of the Board Alexander Ivanov. According to base “SPARK-Interfax”, the Purim heads the Crimean branch of “Business Russia”.

JSC “Sovmortrans” in the group is engaged in container transportations, port forwarding, provides multimodal and intermodal transport. Has two freight transshipment complex in St. Petersburg. Of JSC “Sovfraht” – the head company of the group. Specializiruetsya on railway transportation of oil cargo. In particular, involved in the export of products manufactured by Antipinsky oil refinery, Mari oil refinery, and factories “Rosneft” group “TAIF” (data from the website of the SF-SMT). In addition, carries out Maritime and river cargo transportation, chartering. Engaged in organization of transportation of oversized and heavy cargo.

“Koksokhimtrans” renders forwarding services in the Crimea, including sea, river and rail transportation. The management company are a freight ferry, and a two car-passenger. The company, according to its website, provides more than 35% of Maritime traffic between the mainland Russia and Crimea. One of the ferries of the fuel storage container I got this summer. The lease transaction has funded, the Bank “Russia”. According to base “SPARK-Interfax”, now the company is on a parity basis own Victoria Oksuzyan and Angelica Shakleina. Among the former executives appeared in Italy.