Budget revenues of the Russian regions in the first half of 2016 increased by 3% (adjusted for inflation declined by 5%). But the overall figure hides a high differentiation of the regions: the richest 20% of the regions income rose 1.7%, while the poorest 20 percent — virtually unchanged (growth by only 0.3%), according to the study the Analytical credit rating Agency (ACRA). The income inequality between rich and poor regions “re-aggravated”, and since 2012 the gap has increased by 10%, say analysts at the Agency.

To calculate the differentiation between the incomes of the richest and the poorest regions of ACRE used indicator fiscal revenues per capita (according to the non-consolidated regional budgets). The Agency concludes that the richest 20% of regions have a relative level of own incomes 6.8 times higher than the poorest 20 percent. Own revenues are tax and non-tax revenues, they do not include non-repayable receipts from the Federal budget.

Inequality of regions is growing due to shrinking possibilities of the Federal centre — the share of transfers from the Federal budget has been steadily declining, the authors of the review. Through assistance from the Federal budget gap regions in their own income may be reduced to 4.2 times (see table and graph), but the reduction in transfers leads to an increase in differentiation. According to the Agency, in the first half of 2016, the volume of transfers to the regions fell by 12%, and their share in the budget revenues decreased to 17% compared to 20% in the first half of 2015. 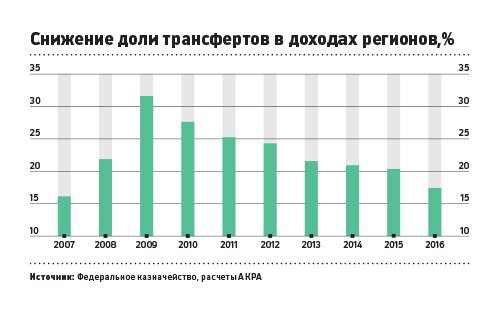 Last year the increase in the income gap between the regions affected and the devaluation of the ruble, which has increased the income of regions with a high share of “export-oriented” taxpayers (Sakhalin oblast, Khanty-Mansi, Krasnoyarsk Krai).

Equalizing effect of Federal transfers have always been relatively modest” because the subsidies for leveling account for only about one third of all subsidies to the regions: the rest is grants and subsidies, the allocation of which budgetary security of subjects not always taken into account, says the Deputy Director of public Finance S&P Karen Vartapetov. “One-third of budget revenues — a substantial amount, can greatly affect the dynamics of aggregate income,” — says a senior analyst of sovereign and regional rankings AKRA Elena Anisimova. 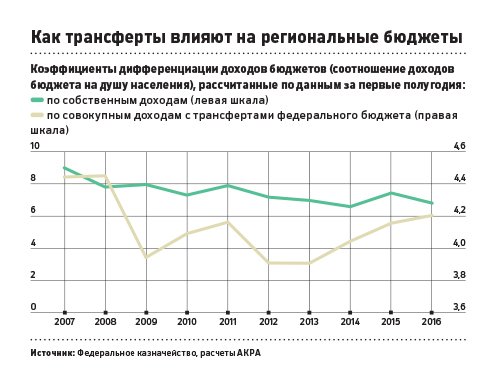 Next year, subsidies for equalization of budgetary security, the Ministry of Finance planned to leave in the current year, said in July the Director of the Department of interbudgetary relations of the Ministry of Finance Larisa Eroshkina. But she warned that all intergovernmental transfers decrease by 15.5%, in the first place it concerns subsidies” (quoted by “Interfax”). In particular, subsidies for the implementation of “may decrees” of the President to increase the salaries of state employees decreased by 5%, from 30 billion rubles in 2016, transfers for road operations from the level of the current year it was planned to reduce by almost two times, said she. “Now continue to work on the project of the Federal budget, so it is premature to talk about specific numbers,” — said the representative of the Ministry of Finance.

“If the relative level of transfers will be retained, the increase in the gap may be suspended, subject to the slowdown in spending. That is a fourfold gap in aggregate income per capita at least will remain”, — said Elena Anisimova.

In 2016, the regional budgets, in fact, two of their own source of growth is personal income tax and the excise tax, the study said. Key sources of income for the regions are the profit tax and personal income tax, and Federal transfers. But if the poorer regions of the income depends on the dynamics of the transfers, more than the rich — that is from the dynamics of tax revenues, adds Vartapetov from S&P.

The growth of tax revenues, which could improve the situation, regions should not expect: on fees personal income tax “presses” the growth of informal employment (in General, the structure of tax revenues for this tax accounts for almost a third). And given the fact that additional features of the effect of the devaluation and import substitution were used in 2015, the sources of growth in fees income tax (37% in the structure of tax revenues) in the current year has been exhausted. The increase in fees excise taxes caused a nominal increase in rates, according to a study of an ACRE (see table).

In General, when the condition of a constant tax policy, the share of transfers in budget revenues will decline 1% per year, which will lead to an increase in inequality in the future, analysts predict ACRE.

The deficit will be inevitable

“The widening gap will lead to necessity of search of targeted solutions for portions of the regions and, possibly, revision of the principles of transfers,” says Anisimova.

The total expenditure of regions are growing faster than revenues, the study said, while “the growth of spending on articles is uneven; for example, the Russian regions have spent on education almost as much as the previous year, and on national economies — 12% more (in the first half)”. Yet, according to statistics from the Federal Treasury, the revenues of the consolidated budgets of the regions as a whole exceeds the expenditure. But ACRA believes that the growing difference between revenue growth and the debt burden will inevitably lead to a deficit at the end of this year.

Due to stagnation in revenues and strong pressure on the expenditure side, the deficit of regional budgets will increase. And in conditions of restricted opportunities for cost optimization, the regions will have to enter the financial markets: to take Bank loans and to issue bonds, agrees Vartapetov. “The volume of placed bonds, according to our forecasts, will not be less than last year (about 100 billion rubles),” he predicts. ACRE expects that the volume of placements will remain at the level of 2015.