All weekend, on September 10-11 in Moscow will work in 212 sites that will host more than 1,000 events, says the celebration at the mayor’s office. The festivities will be broadcast on 30 video surveillance cameras, and for Muscovites earn 200 points free Wi-Fi. On Saturday evening, city residents will see fireworks, and on Sunday, September 11, the city authorities promise the first parade of city vehicles. The parade will last for three hours, on the garden ring will be 675 units of cleaning equipment and emergency services. And along Krymskaya and Pushkinskaya embankments will float boats, jet-ski and fire-rescue ships, showing the operation of water guns.

For a event of the Moscow structure has placed orders totaling more than 580 million rubles, follows from the tender documentation on the procurement website. Officially, the Moscow authorities the cost of the celebration is not called, the press-Secretary of mayor Gulnara Penkova has not answered the question about the cost of the holiday.

The estimates this year include expenses for the dispersal of the clouds (89 million rbl.), but do not account for the entire amount spent on the festival “Moscow cinema” which will pass in Moscow from 9 to 18 September and will partly overlap with the city Day. 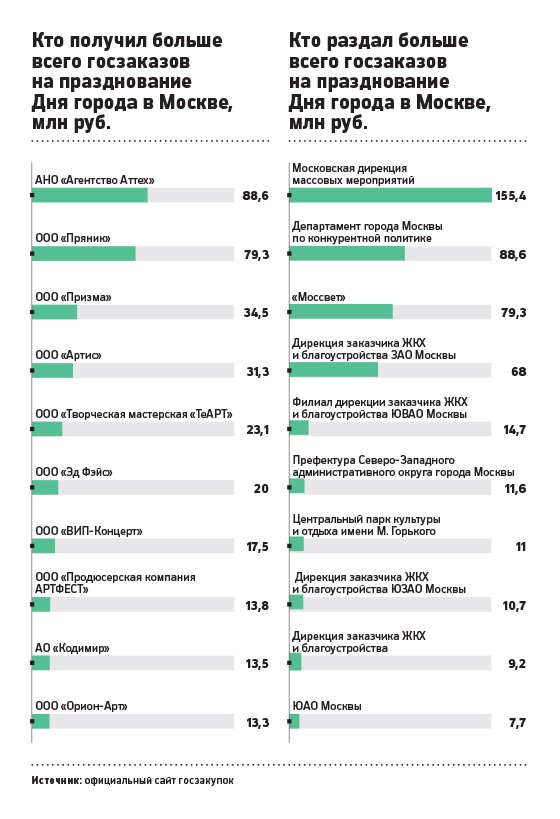 The most important of arts

The most expensive item this year — the organization of cultural events. The total amount of contracts amounted to 363 million rubles.

The whole theme of the holiday is connected with the cinema, and gradually will flow into the festival “Moscow cinema”. Tverskaya street will turn into a film Studio under the open sky, promised the mayor of Moscow Sergey Sobyanin. The street will be installed thematic exhibitions and art objects from the Soviet and Russian cinema, announced the municipality. To Muscovites will show scenes from the film “Ivan Vasilyevich changes occupation”, “pig and shepherd”, “War and peace”, “the Night watch”, “hipsters”, etc. Sites will be visited by the actors playing in these films. In Gorky Park will show movies, plays and outdoor performances, all associated with kinamatics events will be held at 50 venues in Moscow. 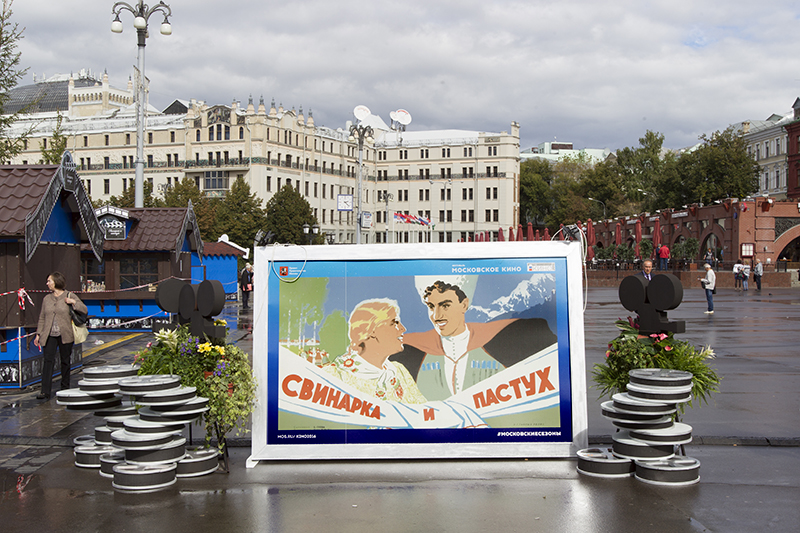 33 site dedicated to the festival “Moscow cinema”. Each site will dedicate a Soviet or Russian film — they will decorate posters and thematic tantamareski. Photo: Vladislav Shatilo/

The biggest contract on the “organization of cultural events” was won by OOO “Carrot”, which received a contract for 79 million RUB from GBU “the Moscow fair”. In the terms of reference to the contract specifies that the company must ensure that the decoration points of the celebration, the bringing of electricity and cleaning. The company operates since 2014 in the last two years she has won six tenders from the Moscow city hall, exhibition center and GBU “the Moscow fair”. The representative of the “Stick” Margarita Kondratieva asked to ask questions about the company’s work in writing and at the time of publication of the material did not respond to them.

Kinamatics the celebration of the city not limited. So, for 5.5 million rubles, the Kremlin equestrian riding school have to show the performance of the 24 riders, reflecting the theme of the 750th anniversary of the battle of Moscow, the value and the culture of the Cossacks. On VDNH will be held all-Russian festival of saving “#Vestiare, the monuments will read poetry, and parks will be organized performances by musical groups.

The second cost category is the decoration of the city. For this purpose the Moscow government will spend will spend 125 million rubles, the Municipality has already chosen the symbol of the holiday — glowing numbers 869 in the colors of the tricolor. The decoration of the Central administrative district flags and decorative designs will cost 6.4 million RUB Surround decorative design “Emblem — Flag” only in two places, Kutuzovsky Prospekt and Novoarbatsky bridge is 13.5 million rubles. 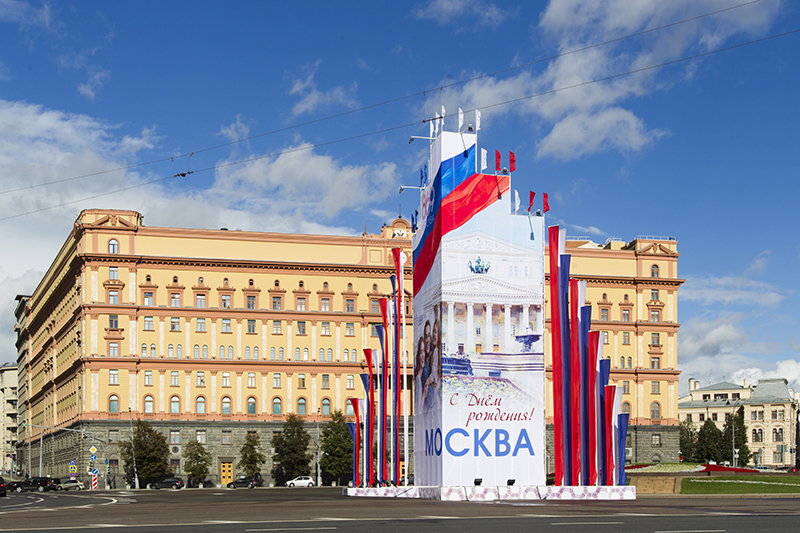 From the Moscow budget has been spent 124 919 275 rubles for execution of works on registration of the city surround decorative designs and flags. Photo: Vladislav Shatilo/

Execution of works on installation of flags and oversized, decorative designs “Trivial” and the installation of the song “Moscow stand greeting” will “Mossvet” only he will receive for the day of the city 67 million rubles.

The city will be decorated mostly with flowers: in the tender documentation of several of the tenders indicated that the number of artificial plants shall not be more than 30% of the total weight of the jewelry.

The evening of 10 September, Muscovites will be able 32 points to see the fireworks for the 17 million rubles mainly fireworks will be allowed in the parks. They were made by customers of fireworks. It is a Park of culture and rest Babushkinsky Park Sokolniki, Gorky Park, Lianozovsky Park, and others. The evening sky lights up with fireworks in the form of emoticons, lilies, daisies, peonies and dahlias, the website of the Moscow government. Will salute in the colors of the tricolor, and the final salute will be a lot of gold and silver waterfalls. 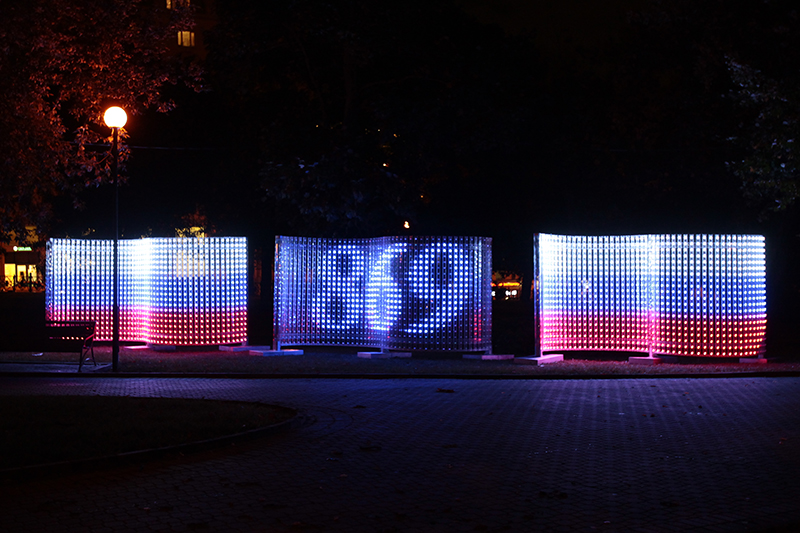 Number 869 — this is the number of years said this year the Russian capital is represented by the blue and red rings, symbolizing the ring scheme of construction of Moscow. Photo: Vladislav Shatilo/

Not Muscovites remain without gifts. According to the competitive documentation, to the city Day some of the Council decided to give residents of humidifiers, electric kettles, blankets, sets, drinking glassware sets, food storage containers, tea sets, t-shirts, flags, pennants and banner. 865 thousand RUB spend UPRAVA RAYONA Chertanovo Northern gifts to residents who, according to the documentation purchases, will consist in the organization of sale of tickets for entertainment, cultural events. Council of the district Khoroshevo-Mnevniki will give the residents of 400 toasters in the amount of 677 thousand RUB, the district Council Schukino will give the residents taking an active part in the life of the district, juicers, food processors and crepes on 447,8 thousand RUB Total gifts to Muscovites will take 6.9 million rubles.

Half the contracts on the city day in 2015, concluded the state Autonomous institution “Moscow Directorate of mass events” (MDM), the founder of which is the Moscow Department of culture: from RUB 500 million to 255 were distributed MDM.

This year’s budget allocation on the day that the city was involved a lot more structures. MDM retained cost leadership by distributing 155 million rubles., but none of the tenders of organization did not contain in its title the mention of the holiday. They are all equally called “Rendering services on preparation and holding of cultural events”, the words “the city Day” is not contained in the terms of reference. About what exactly a contract, it is clear only from the date of the contract — it indicates that services are necessary to the Moscow authorities on 10 and 11 September. The rest of the contests were initiated by other organizations — from State to district councils. 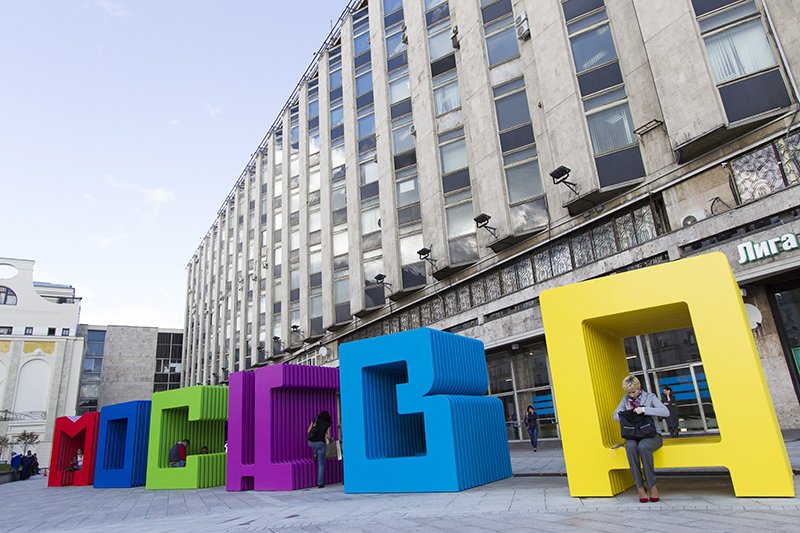 The city will house more than 270 art objects. The average cost of one such object is 6 000 000 rubles. Photo: Vladislav Shatilo/

In 2015 almost all the activities carried out in the framework of the Moscow city Day, organized MDM within or without competitive procedures or without bidding, said the Deputy Director of “transparency international — Russia” Ilya Shumanov. In 2016, apparently based on close attention to bidding in the organization of leisure of children and the tragic consequences in Karelia, the Moscow government adopted a decision on procedures for the selection of participants through transparent, competitive procedures, at least in part the bidding, he says. But the analysis of the procurement doubts about the reality of competitive procedures: often the winners are individual entrepreneurs with no experience in the performance of government contracts. In addition, says Schumann, the key bulk of the customers of the city day of Moscow’s Autonomous institutions, state companies, state enterprises, whose expenses happen to not entirely transparent and competitive scheme.

Closer to the election

Traditionally a city holiday in Moscow is held the first weekend of September, but this year the mayor signed a law on the postponement of the celebration for the week ahead. Thus, the major Moscow festival will be held at the latest before the election of the state Duma of the weekend. Officially, the Moscow authorities explained the transfer that first weekend coincided with the dates of mourning, including the Day of the tragedy in Beslan and the anniversary of the terrorist attack in Buynaksk. According to authorities, the way to celebrate the Day the city decided Muscovites themselves on the portal “Active citizen”.

The theme of the coincidence of the celebration of city Day with the dates of the tragic events in Beslan rose before, says political analyst Yury Zagrebnoy. In 2005, the anniversary of the tragic events in Beslan, the Moscow authorities canceled some activities, in 2011, the main celebrations also were held on Saturday, September 3, the anniversary of Beslan, and on Sunday, September 4. The date for the celebration of the city Day was moved closer to the elections of the state Duma on 18 September to the end of the campaign “add positive”, I do not agree, the political analyst Valentin Bianchi. “This is a classic the biggest festival in the region under the voting day, which is organized by the government. It was even shown in the movie “election Day,” he says.

If the cost of the celebration of this holiday is not increased in comparison with the year 2015, it is a cost reduction, given inflation, says Stroke.