At the Russian Embassy in Kiev clashed with police after a group of protesters tried to block the entrance of the building where the polling station, reports “Interfax”.

One of the protesters blocked the entrance to the Embassy for those wishing to vote, a few people headed by the Deputy of the Kiev city Council, the former people’s Deputy from the party “Freedom” Igor Miroshnichenko began to shake the fence.

The law enforcement officers managed to unlock the entrance and to push the protesters, one person was detained.

As the channel “112” in the Russian Embassy beat the man who probably came to vote. “Now came the citizen of the Russian Federation the right to vote, but protesters do not allow. Police are trying to push the protesters, so they do not interfere with the electoral process, but while continuing the verbal sparring. I note that law enforcement here has about 300”, — told the correspondent of the TV channel.

According to him, the number of protesters reaches a hundred people, the number is growing.

Earlier, the CEC member Vasily Likhachev told Interfax that the Commission is satisfied with the heavily guarded Russian Embassy in Kiev and the elections on plots located in Ukraine, in General. According to him, about a hundred policemen and members of the National guard of Ukraine located near the Russian Embassy in Kiev. 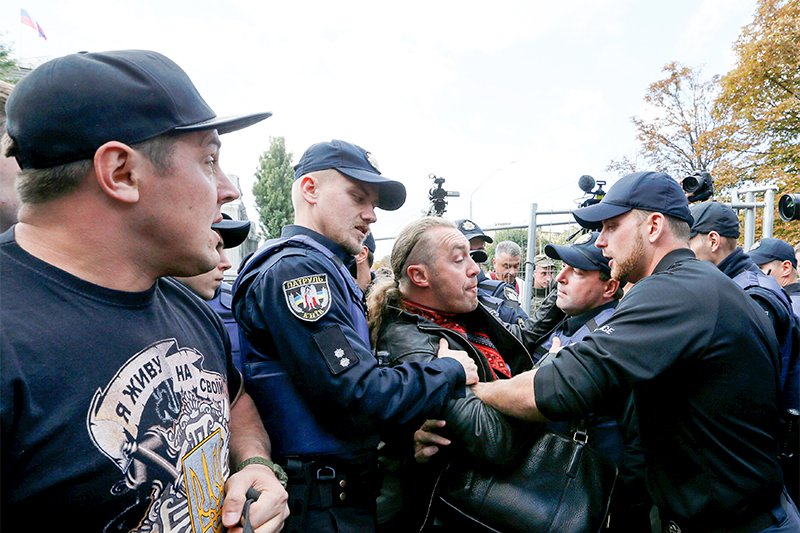 Police officers hold back demonstrators at the Russian Embassy in Kiev 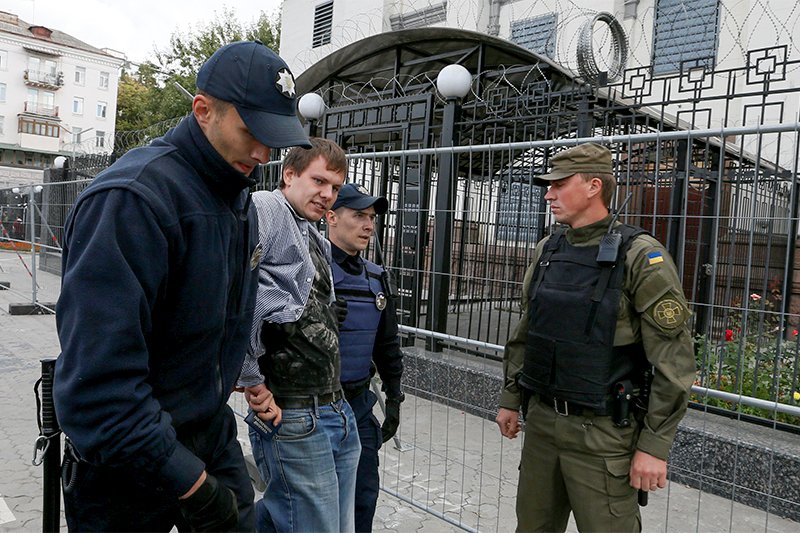 Police officers detain a demonstrator outside the Russian Embassy in Kiev

In Odessa also there was a fight, after representatives of the “Right sector” (banned in Russia for extremism organization) tried to block the passage of the voting citizens of Russia. “There was a fight between representatives of “Right sector” and the police. It all started with the fact that a group of activists composed of about ten people arrived to the Consulate General, one of them tried to prevent the man to go to vote in the territory of the Consulate. After that he tried to detain law enforcement officers, there was a fight and when he was seated in a patrol car, it tried to free other members of the “Right sector” began a larger fight,” he told the channel.

According to him, several people were detained, the entrance to the Consulate General free.

In the night of Saturday radical activists threw firecrackers at the Russian Embassy. Prime Minister of Ukraine Volodymyr Groysman called the attack “a small incident” and hooliganism.

After the incident at the Embassy the head of Department of communication of Ukraine Yaroslav was Trakalo promised to strengthen the protection of the diplomatic missions of Russia on election day.