Russian banks are forced to compensate for the low lending activity increase in investments in securities, according to the research of the National rating Agency (NRA) ().

According to calculations of the Agency, the total securities portfolio of the top 100 banks by assets increased over the year by 33%, to 7.92 trillion rubles. the Main growth of banks ‘ portfolios related to the purchase of government bonds. So, from July 2015, the proportion of Federal loan bonds (OFZ) in the total portfolio increased from 28.7 to 38.5%, the proportion of shares and corporate bonds, by contrast, declined from 9.6% to 7.3% and from 56.3 to 51.2%, respectively. “Due to low credit activity in the banking system, the growing surplus liquidity. The money many banks used to conduct operations on the market of fixed income instruments, including using the so-called pyramid REPO”, — said the chief economist of the NRA Maxim Vasin.

He notes that the number of banks significantly increased the share of securities portfolio in assets, yet the associated financial risks are not critical. On average, the share of securities in Bank assets does not exceed 11%. At the same time, for banks that use margin trading (transactions with the use of leverage) and the REPO, market, interest rate and credit risks on operations with securities is much higher and could theoretically pose a threat to the stability of their financial results, said Vasin.

Among the largest banks, significantly developing over the year, their investments in stocks and bonds (excluding REPO transactions), are state-owned banks. The undisputed leader of the rating “paper” banks — Sberbank. Country’s largest Bank increased its securities portfolio by almost 60%, to 2.33 trillion rubles In the second quarter of 2016, the Bank’s securities portfolio increased by 162 billion rubles., to 3.07 trillion, mainly due to the increase in positions in the OFZ, as well as in local corporate bonds” — the analyst of Raiffeisenbank Denis Poryvai. According to him, Sberbank is one of the most active investors on the local market due to the influx of cheap liabilities.

The growth of the securities portfolio, VTB has been more moderate. On July 1, 2016, his portfolio was only 997,6 billion RUB compared to 785,1 of July 1, 2015. “In the group’s assets portfolio takes no more than 5%. However, over the last five years, we have significantly reduced the share of securities in assets, the portfolio structure changed in favor of debt instruments”, — said the press service of VTB. “In this regard, the impact on the financial results of VTB from operations with securities only slightly,” said the official representative of the Bank.

VTB also said that the securities portfolio of BM Bank was acquired in the framework of financial rehabilitation of the Bank of Moscow. “Active operations has been initiated, reassessment is also no”, — have informed in a press-service.

Sberbank declined to comment, VTB 24 has not responded to the request .

According to calculations of the Agency, NRA, nearly 20% of banks the share of securities pledged under REPO transactions, on July 1, 2016 more than 50%. For example, the Bank “Russian standard” in the pledge was more than 92% of all securities, the Bank “FC Opening” in REPO was laid 53% of the portfolio. In “the Russian standard” it is said that 99.7% of the portfolio consists of the securities included in the Lombard list of the Central Bank, and used to attract funding via REPO transactions. “The Bank plans to maintain the current portfolio of securities, as the portfolio return exceeds its cost of funding. Free liquidity of the Bank is invested in safe securities of high quality issuers, and therefore carries the lowest credit risk for the Bank”, — said the representative of “Russian standard”. However, he said that most of the securities held in the portfolio “held to maturity”, so their risks to the market revaluation are not available.

Another reason of interest of banks to the “paper business” in the fact that in conditions of declining interest rates, the investments in bonds and debt instruments allow to earn high incomes, despite the decline in bond yields. In the first half of 2016, the banks ‘ profits from rising bond prices as well as from transactions with securities increased to 268 billion rubles. against 110 billion RUB over the same period of 2015, according to the NRA.

“Income from speculation in securities began to exert increasing influence on the financial result of banks”, — says Maxim Vasin. It indicates that 42% of profit in January—June 2016 banks earned on securities. According to the Agency, a number of banks income is derived from speculation and revaluation of securities portfolio (excluding REPO transactions), may significantly exceed the income from other activities. “The situation in which the income from transactions with securities are rising and the banks derive profits in this market, we assess as temporary. This is due to the weakness of the credit market: the delay increases and the rate of credit growth remain extremely low,” say the NRA.

According to the Bank of Russia, in January—June of 2016, the volume of credits to economy decreased by 5%, loans to individuals — 1%. However, in July, the regulator noted the recovery of the credit activity of banks — corporate lending increased by 1.6% and the volume of lending to citizens increased by 0.4%. In August, the lending companies banks fell again (by 0.9%), but the rate of consumer loans remained positive (up by 0.7%). However, as noted in the release of the Central Bank, the securities portfolio for August decreased by 2.6%.

“The securities portfolio in banks’ assets in 2016 looks pretty stable, its total volume declined YTD by 3%,” — said the Deputy Director of the group Finance ACRES Valery Piven. At the same time, the expert said that the market has a tendency of growth of investments of banks in shares. According to the ACRE, with the beginning of the year the equity portfolio of the banks increased by 9%. “This can be explained as a simple re-evaluation, the subsequent on the background of the rise of quotations of securities of Russian companies, and some reinforcement of the banks’ interest in portfolio investment in a situation where the core business is stagnating,” — said Valery Piven.

In ACRE also note the trading activity of banks in the bond market. “On the one hand, can also be the result search of livelihood opportunities at zero rate of growth in the loan portfolio. On the other — banks could seek benefits, relying on the reduction in the rate of the Central Bank”, — says the expert. In his opinion, increase the banks ‘ investment in bonds can continue until the end of the year. “The banks will continue the position in RUR Eurobonds, but the investment on the market of ruble-denominated debt may increase,” — said Valery Piven.

“Probably, banks will continue to increase their portfolios of bonds, although some of the money they can allocate to instruments (deposits/bonds) of the Bank of Russia”, — says senior Director of Bank ratings Fitch Ratings Alexander Danilov. In addition, according to him, the next year at least reduce the amount of the Reserve Fund to the Ministry of Finance will likely have to increase domestic borrowing. “The main buyers of OFZ can make large banks”, — says the analyst.

Revaluation of portfolio securities may result in significant fluctuations of ruble and dollar interest rates and changes in credit spreads of bonds and Eurobonds of Russian issuers, according to Raiffeisenbank. The Bank estimates that more than 60% of its portfolio invested in OFZ, Russian Eurobonds, US treasuries and Eurobonds issued by EBRD, the share of income from securities is about 2% in the operating income of the Bank according to IFRS. “Interest rate risk in the securities portfolio partially hedged interest rate derivatives and futures on the OFZ based on the information sensitivity of revaluation of the portfolio to changes in interest rates,” — said the representative of the Bank.

“We do not see significant risks for the banking system in connection with the growth of investments in bonds. Credit risk is relatively low because most of the market by volume — state and first-tier companies. Potentially more significant interest rate risk due to the possibility of a negative revaluation of bonds in the case of a sharp rise in rates, as it did in December 2014”, — said Danilov. 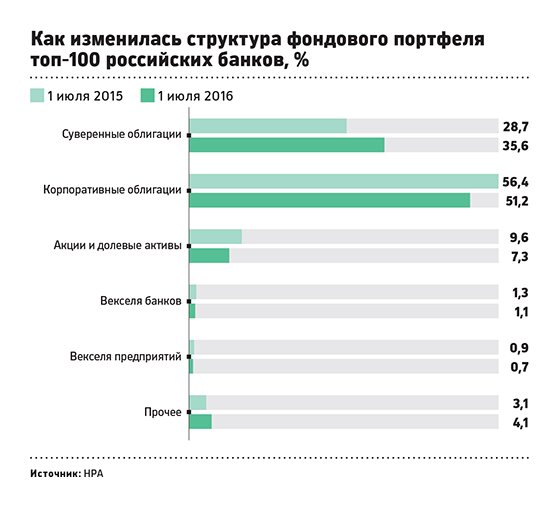 According to Fitch, this scenario is unlikely as the Central Bank holds a policy of gradual reduction of interest rates. “In the case of stress, the regulator may allow banks to transfer securities in the portfolio until maturity, which will save them from having to reflect negative reassessment,” says Alexander Danilov.

Interest rate risk is now somewhat more likely for those banks who are heavily invested in Eurobonds, as the market expects the fed rate hike that may lead to impairment. However hardly it will be about a big correction, says the analyst.