The study, to measure the level of isolationist moods among Russians, Levada center held 9-12 September among 1,600 people over 18 in 48 regions of the country. Sociologists, in particular, asked respondents whether Russia to improve relations with the United States and other Western countries.

For the year, which was conducting similar research, the number of positive respondents to this question decreased. Only 15% of respondents definitely advocates for the establishment of relations with the West, while in November 2015 the figure was 23%, and in September 2014 it was 17%.

Became less and those who are leaning towards the need to improve relations with the West, if in November 2015, the figure was 52%, this year only 47%. Similar polls conducted in September 2014, when the confrontation with the West has entered its active phase, after in March, Russia announced the annexation of Crimea, Western countries, primarily the United States and Europe, introduced still in effect sanctions against Russian companies and officials. But even in September 2014, the number of respondents who were inclined to establish relations with the West, was 53 percent more than now.

Increased the number tending to what to improve relations is not necessary, and those who definitely do not want the first, according to a poll by the Levada center, 18 versus 14% a year earlier, the second 6 to 2% a year earlier. “But in General, the number of those who are against normalization of relations, the same as they were in 2014, that is, when relations with the West was not at all, a total of 24%. This means that fundamentally the situation has not changed,” — said the Deputy Director of the Levada center Alexei Grazhdankin. 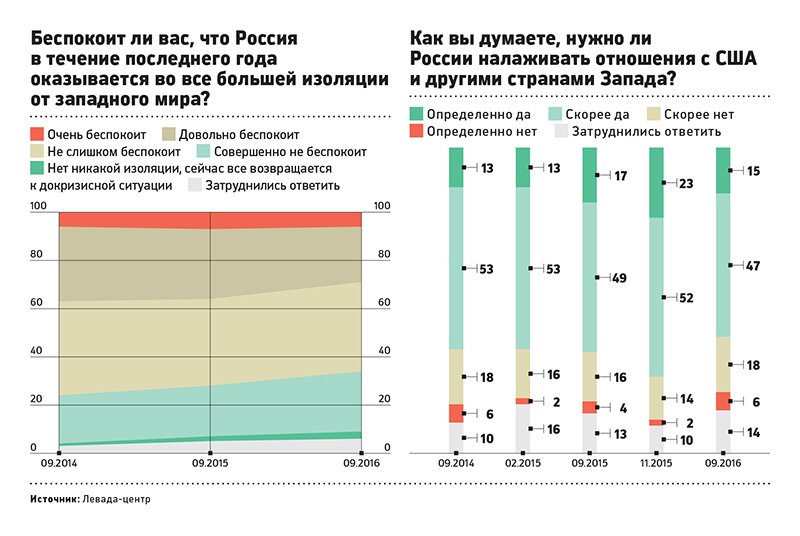 The growth of isolationist moods among Russians is still observed, evidenced by answers to another question of sociologists, “does it Bother you that Russia in the past year, it appears increasingly isolated from the Western world?”. Respondents overall have less to worry about from the isolation of the country. Those whom it may concern, this year 23%, while in September 2015, the figure was 29%, and in September 2014 is 30%.

Increased the number of respondents who isolation of Russia does not touch them. This year this was reported by 25% of respondents, a year ago talked about this (21%). According to Grazhdankin, indifferent attitude of Russians to ensure the condition of relations between Russia and the West, means that “people are accustomed to the fact that these relations are in constant crisis.” “People make their plans and live based on that reality, which developed from 2014. Most of this reality is not going to change — someone thinks it’s pointless, and someone unpatriotic,” says Grazhdankin.

At the same time Russians believe that Russia’s relations with the US and the West will develop without major upheavals. Virtually unchanged the number of respondents who believe that the confrontation between Russia and the West will be gradually launched on the brakes and the relationship will return to what it was before the beginning of open confrontation in September 2016, this forecast was given 48% of respondents in February — 49%.

People will not want to improve relations with the West, while the Russian elite do not want, the Director of the Center for political technologies Igor Bunin. “Elite,” says Bunin, must realize that in the global world of work “global approaches”. “Cannot alone create anything and even more impossible to create anything in the opposition. If the President will proclaim the course to return to the global world and begin the settlement of accumulated conflicts, especially in Syria and Ukraine, and the society will agree with this”, — said Bunin.

The isolationism of the Russians based on the belief that Russia — “a great Empire and she doesn’t need anybody,” says Bunin. This Imperial installation introduced another “Soviet power” and “isolation from the Western world.”